BWorld 75, How to profit from urban congestion 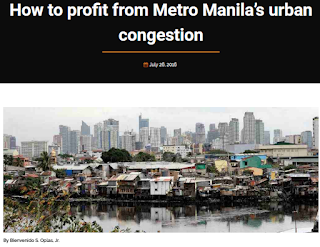 Worsening traffic congestion in Metro Manila and other big cities in the Philippines has led people to believe that this will negatively affect people’s health, temper, and eventually, the economy. Thus, the solution is to decongest heavily urbanized cities and spread out development and modernization to the peripheral cities and provinces.

Although the focus of the discussion was about how companies prepared for smooth corporate succession, the speakers also provided a wider perspective and tackled some national issues and transition. All agreed that Metro Manila is very congested and that developments should be driven to less urban and rural areas. Mr. Tan in particular highlighted that many real estate developers are going out of Metro Manila because there are more developments in several provinces and big cities, more BPOs, other businesses.

If we look around the world, each country has one or more political and/or financial capital and these places experience congestion where the demand for certain services outpaces the supply. This happens because congestion is natural and part of human nature’s demand for socialization and interaction. It is faster and easier if the office, the kids’ school, the bank, grocery store, car repair shop, etc. are just a few kilometers away instead of dozens or hundreds of kilometers.

Let us check the degree of congestion of the Philippines compared to other ASEAN nations, and from two small, highly congested neighbors. A 50-year gap, 1964 to 2014, table is constructed. The per capita income in purchasing power parity (PPP) valuation over a 30-years gap is also shown.

What the above table shows are the following:

1. Highly-congested Singapore, Macau, and Hong Kong also have very high per capita income. There are many explanations for this and the efficiency gains of having almost everything nearby is definitely one of them. Brunei is a different case, small population but relatively big land area rich with energy resources for export, like natural gas.

2. Less-congested Cambodia, Myanmar, and Laos also have low per capita income of only $5,100 or less. Again, there are many reasons for this and the inefficiencies and inconvenience of being far from various economic units like big banks, big grocery stores, etc. should be one of those reasons.

3. The Philippines is second most congested country in the ASEAN after Singapore. Its population has more than tripled over the past 50 years.

Let us check the numbers for Metro Manila. From 636 square kilometers originally, the megacity now has a land area of 644 square kilometers (owing to reclaimed areas at the CCP-SM MOA) and a population of 12.877 million, as of the August 2015 census. Based on these numbers, its population density is 19,995 persons/sq. kms., comparable to that of Macau.

But one report says World Bank data shows that Metro Manila has a 1,300 square-kilometer land area as of 2010. Or a population density of 9,906 people per sq. km. in 2015, still higher than those in Singapore and Hong Kong.

So if congestion is natural for people, how can we optimize and benefit from the presence of many people per square kilometer of land?

ACDimatatac-301. More land reclamation. The 800 or so hectares in the CCP-SM MOA-Entertainment City have created lots of businesses and jobs for Filipinos. The planned additional reclamation projects in Manila Bay should proceed, and at a fast rate.

Aside from creating new lands in the sea, there is also a need to remove huge volume of silt, mud, and solid wastes in river beds of the Pasig, Las Piñas, and Marilao rivers that drain into Manila Bay. These smelly solid wastes cannot be brought to dumpsites where most LGUs declare a “not in my backyard” (NIMBY) policy.

2. More skyways, elevated interchanges and U-turns, tunnels. Traffic congestion is an engineering problem with engineering solutions. Such solutions should veer away from hiring more traffic officers and officials, avoid having more stoplights. Instead, officials should build more hard infrastructure that can provide service to the public and motorists 24/7 for decades to come.

3. More trains, LRT/MRT, running along C5 and C6, above ground and underground, extending north and sound, east and west, of Metro Manila. In Tokyo, Seoul, and Singapore, it is common to see multi-level train stations and shops underground. Public Private Partnership (PPP) schemes are already existing to encourage more private funding and construction of these projects.

4. More low-cost medium- and high-rise residential condos. This immediately frees up space for more urban forestry and public parks, unlike in horizontal low-cost housing. Multiple regulations and taxation by both national and local governments should also decline. These are costs that are ultimately passed on to condo unit buyers and renters, that make vertical housing less affordable to the poor and lower middle class.

People and businesses respond to incentives and disincentives. If there are many disincentives and inconvenience in taking (often multi-ride) public transportation, then more people will drive their cars or motorcycles, which contribute to heavy traffic congestion. Government taxation and regulations that distort the market for urban transportation, housing, and other services should be reduced.