One of my student organizations in UP Diliman in the 80s was the UP Samahan sa Agham Pampulitika (UP Pol. Science Club). I shifted from BS Statistics to AB Political Science then AB Economics. While majoring in Economics, my minor subjects, about 4 or 5, were Pol. Science.

At a Sapul grand reunion last March hosted by Alex Gaticales. Former UP President Francisco "Dodong" Nemenzo was a Sapul alumni, he came that night, assisted by his wife, Princess Nemenzo. This family is close to me, mainly through Fidel, the oldest of the 3 kids of Princess and Dodong.

Standing from left: me, Frances Aquino, Ochie Tuazon, Marilyn Alberto, Bong Cruz, Rikki Dio, Raffy Aquino. Sitting beside Dodong is Kiko Magno. Frances is a past DAR UnderSecretary during the PNoy Aquino government. Bong is the past head of PH Overseas Labor Office (POLO) in Dubai, he's back at POEA Manila. Kiko is Prof of Pol. Science at DLSU. 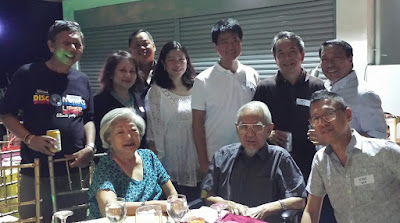 Other prominent UP Sapul alumni include CPP founder Joma Sison and MNLF founder Nur Misuari. Am not proud of Joma of course. Nur, hmm, from a great Muslim warrior to a bureaucrat.

Ed posted our photo in his fb wall and wrote this 5+ years ago,

"Fellow Sapulite Nonoy Oplas showing me his book on medical costs in PHL: his conclusion, medicine should not be subsidized by public funds. We are all responsible for our own health. In large part, I like that idea!" 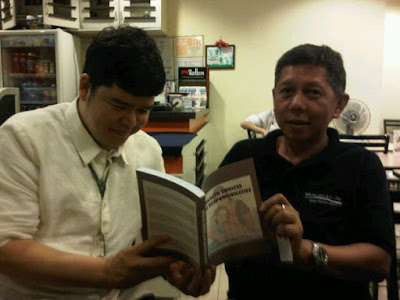 Ed is a very friendly, helpful and cheerful guy. When my sister in law, a former emergency nurse in a Saudi Arabia government hospital died of MERS-CoV, Ed helped a lot, from facilitating the return of her remains from Riyadh to our province in Negros, the release of her benefit package from the hospital, and so on.

Other Sapul friends that night. From left: Ed, me, Jopay P. de Luna, Lalaine S. Stormorken, Ding de Jesus, Jim Asuncion, Ernie Urbano, Kiko Magno, Judy Sia, Gary Auxilian. Judy is a judge in CDO city while Gary is the PH consul in Saipan. Most Sapul guys are in the private sector, usually as lawyers like Jim, Ernie and Raffy. 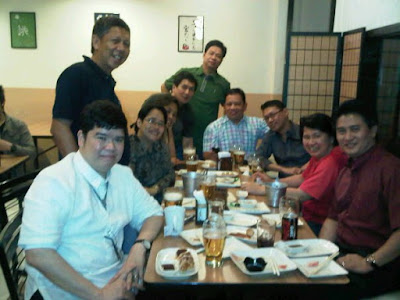 Another reunion about 3 years ago when Da (2nd from right) came home from the US. From left: Kiko, me, Percy Abesamis, Jopay, Abet Sales, Gary Auxilian, Abet Abesamis, Jim, Da, Ding. The two Abets and Jim are doing private law practices. 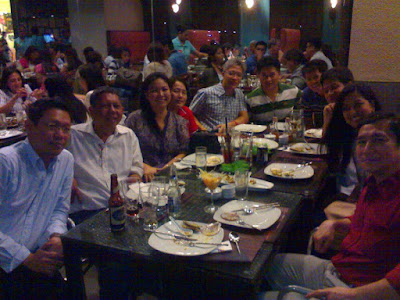 Another reunion 4 years ago, I was not there. Nora Angeles (2nd from right, front) came home from Canada, she's a professor at the Univ. of British Columbia. From left, clockwise: Bong Cruz, Jun Rasul, Mel Manalaysay, Ding de Jesus, Raffy Aquino, Frances A, Nora A, Marilyn A. Jun is another POLO now based in Israel. 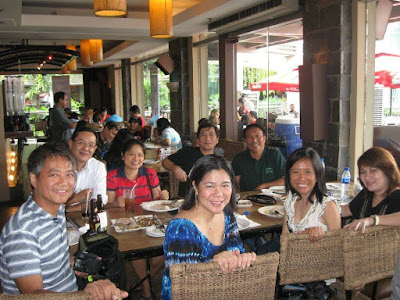 Society is about network and friends, aside from family and clans. Most of my friends are in the private sector, some are in government, and they have occupied or occupying high positions, like Ambassador Ed, POLOs Bong and Jun, and so on. Bong was also one of the former Commissioners of OWWA. The timely release of my sis in law's OWWA benefits was also facilitated when Bong called up the head of OWWA Bacolod City office. Raffy, Frances and Mel are doing private law practices.
------------

Email ThisBlogThis!Share to TwitterShare to FacebookShare to Pinterest
Labels: UP Sapul

Your content is awesome . You have done a great job and its very useful for me . I appreciate your effort and I hope that you will get more positive comments from the web users.
ROI Services in Chennai