In a special interview of former COMELEC Commissioner Christian Monsod by Rappler, he will likely say -- along with Climate Change Commission (CCC) officials, Tony la Vina, Sen. Legarda, etc. -- that less rain or no rain or more rain, less flood or no flood or more flood, we should have more climate agencies, more climate meetings, and implicitly say that we should send more money to the UN, CCC, DENR, etc. so they can save the planet.

The UN, Al Gore, WWF, Greenpeace, etc. claim of "97% scientific concensus on man-made CC" should includes themselves non-scientists (lawyers, politicians, NGO leaders, showbiz like di Caprio, etc.) and are the leading faces to "save the planet." Save from what? From less rain and no rain and more rain? From more flood and less flood and no flood? From less dogs and no dogs and more dogs?

Meanwhile the real scientists? Climatologists, geologists, physicists, meteorologists, chemists, etc.? Many if not the majority say that global warming and climate change are natural and cyclical, nature-made and not man-made. Like this, in the first half  of 2016 alone, 240 peer-reviewed papers argue that man-made or anthropogenic global warming (AGW) is not true. GW is mainly nature-made.
http://notrickszone.com/2016/07/03/already-240-published-papers-in-2016-alone-show-agw-consensus-is-a-fantasy/#sthash.HmwdjKnQ.cnystfXz.dpbs

Around 2006 or 2007, 31,487 American scientists (Yes, from the US alone, not included are scientists from Europe, Canada, Japan,...) signed this petition, including 9,029 with PhDs. Their names, universities or companies, departments, field of science, etc. are all listed there. The petition said,

"There is no convincing scientific evidence that human release of C02 or other GHGs is causing or will, in the foreseeable future, cause catastrophic heating of the Earth's atmosphere and disruption of the Earth's climate." http://www.petitionproject.org/ 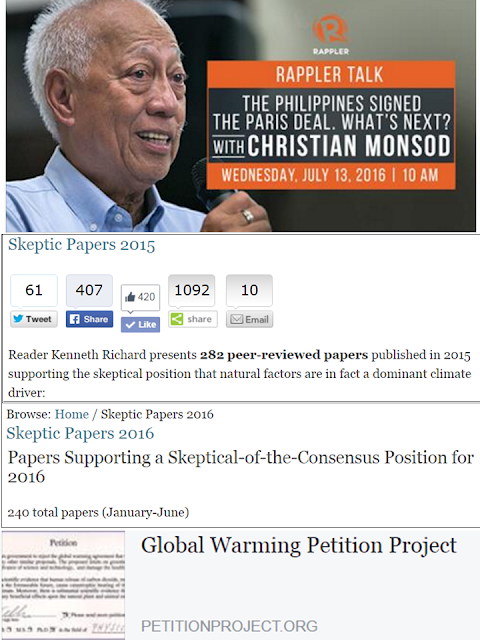 Last month, I engaged in a friendly debate my physician friend, Doc Tony Leachon. I think they, some groups of physicians, are preparing another legislation to help "save the planet". Save the planet via more environmental and carbon taxes, more carbon regulations, more expensive electricity, etc. from the people?

Also last month, MBC Exec. Director Peter Perfecto tagged me and CCC Commissioner Manny de Guzman about that "97% consensus". While I belied that  claim, he never replied to my questions and comments about the global racket -- more climate junkets, climate bureaucracies, climate loans, climate trillions, etc. Consistent with the sound of silence of many warming leaders, they are not interested in climate debate. They are only interested in climate money and forever climate deception.

I told Ronald Mendoza, the new Dean of the Ateneo School of Government (ASoG) my wish that his school won't be as climate alarmist and anti-mining as it used to be when Tony la Vina was the Dean.

Finally, notice that the leaders of climate alarmism movement are also the likely leaders of anti-mining movement because mining contributes to "man-made" CC daw.
-------------