Greenpeace voodoo science was slam dunked last week by real scientists. GP do heavy political science then call it climate science, bio science. They should be ashamed of what they are doing. 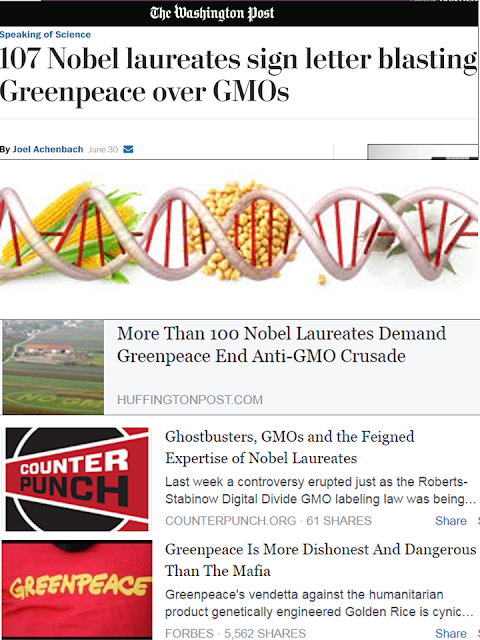 The letter campaign was organized by Richard Roberts, chief scientific officer of New England Biolabs and, with Phillip Sharp, the winner of the 1993 Nobel Prize in physiology or medicine for the discovery of genetic sequences known as introns. The campaign has a website, supportprecisionagriculture.org, that includes a running list of the signatories, and the group plans to hold a news conference Thursday morning at the National Press Club in Washington.

“We’re scientists. We understand the logic of science. It's easy to see what Greenpeace is doing is damaging and is anti-science," Roberts told The Washington Post. “Greenpeace initially, and then some of their allies, deliberately went out of their way to scare people. It was a way for them to raise money for their cause."

GP is wrong on perhaps 99% of their advocacies. Anti-coal, anti-nuke, anti-fossil fuels (yet their leaders proudly and braggingly announce that they jet set to this and that country and continent for various meetings, riding on planes that use 100% fossil fuel...), anti-GMO, anti-capitalism, etc. The 1% where they are correct is campaign against solid wastes that are thrown anywhere.

"From its early days of dodging harpoons and Japanese whalers in outboard motor boats, Greenpeace has parlayed media savvy, flagrant dishonesty and an ­aptitude for political theater into a $360 million-plus per year empire with offices in more than 40 countries." http://www.forbes.com/.../greenpeace-more-dishonest.../...

GMOs are safe. Most if not all the rice that I and millions of Filipinos have been eating since the 70s are GM rice. 4 decades or more have passed, none has become a frankenstein. And no food riots despite the population rising from around 40+ M in the 70s to 102 M now.

There are some scattered studies that perhaps were not peer reviewed or published in lesser known papers saying that GMOs are dangerous and scary. The 107 scientists who speak up here are top caliber ones, Nobel laureates. Between these 100% scientists and perhaps 100% non-scientist GP militants, the former has more credibility.

I think of more modernity, more prosperity, more food efficiency. The PH will soon have 200, then 300 M people and there will never be food riots. Thanks to modern science, thanks to GM science.

Our farm caretaker (now 62 yo) in Pangasinan told me few years ago that when he was young, he was helping his father in rice farming and the "good" quality rice then, non-GM (no IRRI perhaps yet), could be harvested after 6 months. So after 6 months, harvest was very small -- subjected to heavy rains, typhoons, flooding, rats, birds, wild ducks, kuhol, many other pests.