Three of the five themes of the first ever BusinessWorld Economic Forum on July 12 will be on economic integration, technological disruption, and regulation and incentives. Except for three speakers from the government (VP Leni Robredo, DoF Sec. Carlos Dominguez, NEDA Chief Ernesto Pernia, PCC Chairman Arsenio Balisacan), all the other speakers will be from the private sector.

This paper will track some of those themes and analyze the growth expansion and leadership disruption of leading countries in the world and Asia.

Global economic integration was hastened in 1995 with the creation of the WTO. The “normal” pace of economic expansion of many emerging and developing countries is to double GDP size per decade. So over the past 30 years, the average expansion or multiple should have been six times. But many Asian economies (except Japan) have expanded more than that.

Here are the top 10 largest economies in 2015 based on Purchasing Power Parity (PPP) valuation of GDP, then the big economies of East Asia. Their GDP size at nominal or current prices are also given. Russia has no data for 1989 and earlier years because it was still the USSR and contained countries that emerged and separated in 1990 onwards after the collapse of the Berlin Wall in November 1989 (see table). 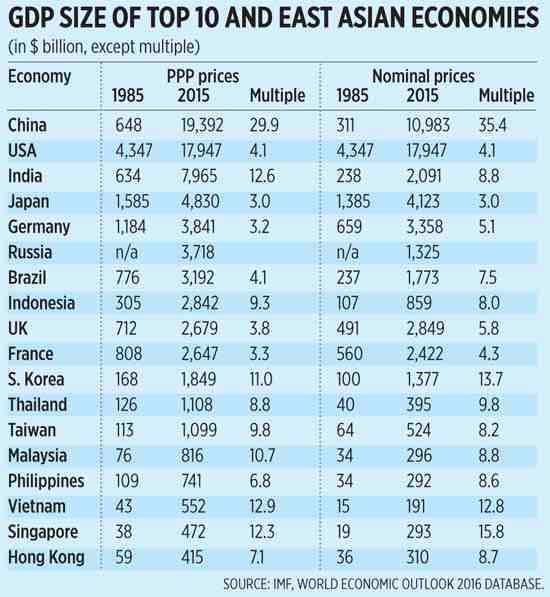 From the above numbers, we derive the following lessons and observations.

1. Integration: A decade before the WTO creation in 1995, many Asian economies were small. Three decades after, their economies have expanded big time, thanks to their fast trade liberalization policy and global integration. Based on PPP prices, China expanded 30 times, Vietnam 13 times, India and Singapore more than 12 times, Malaysia and South Korea by 11 times, Thailand, Indonesia, and Taiwan by nearly nine to 10 times. The Philippines, for its part, has only grown more than six times.

Meanwhile, based on GDP expansion by nominal prices, China is still on top with 35 times the multiple in just three decades. It is followed by Singapore, South Korea, and Vietnam that also posted double-digit multiples. The other Asian economies (except Japan) have expanded by 8-10 times.

2. Disruption: The G7 economies used to grow quickly before and after World War II. They have led global growth and commerce for more than a century. They were the 7 biggest economies until the 1980s, as indicated by GDP at current or nominal prices.

By 1990s, G7 leadership was disrupted and by 2015, China and India have displaced Italy and Canada as the top 7 biggest economies in the world at current prices. And at PPP values, only the US, Japan, and Germany have remained in the top 7 biggest economies in 2015; the BRIC (Brazil, Russia, India, China) have displaced the UK, France, Italy and Canada.

3. Sustainability: A big question is whether the developed and emerging Asian economies including the Philippines can sustain their fast growth in the next two decades. The answer seems to be YES for the emerging East Asian economies plus India and Pakistan. And NO for developed East Asian nations except perhaps South Korea. Why?

The quick answer is population and demography. All the 10 ASEAN countries except Singapore and Brunei have big and/or fast-growing populations. More people means more producers and consumers, more entrepreneurs and workers. Raising labor productivity these days is much faster than two or three decades ago because of modern technology. One can get great speakers and trainers from around Asia or the world quick because of dynamic airline competition, or simply via online teleconference training and seminars. The important thing is that there are plenty of trainable people.

Furthermore, based also on the above numbers, these trends are emerging.

2. Korea will become a $3-trillion economy (PPP values) once the north collapses and merges with the south. The collapse of East Germany and USSR in 1989-1990 was quick and generally peaceful. The same is to be expected in North Korea, perhaps within 6 years.

So long as we keep faith in the market economy and human innovation, global economic integration will result in a more prosperous, less destructive planet. And that means disruption to the old thinking that force and wars can settle disputes. Humanity is more rational than what certain sectors think.

Bienvenido S. Oplas, Jr. is a Fellow of SEANET and Stratbase-ADRi, and head of Minimal Government Thinkers.
------------

The site contains a very great article. the information present in this site will be very useful for us. thank you for sharing the blog with us.
ROI Services in Chennai