https://www.theguardian.com/commentisfree/2018/oct/15/edible-insect-save-planet-global-warming-tasty-trendy?
Reducing our meat intake is crucial to avoiding climate breakdown, since food production accounts for about a quarter of all human-related greenhouse gas emissions, and is predicted to rise. In western countries, this means eating 90% less beef and five times as many beans and pulses.

Edible insects have been hailed as a solution to both global food shortages and reducing emissions from animal agriculture, but despite the industry’s best efforts, our response when faced with a cockroach is disgust. 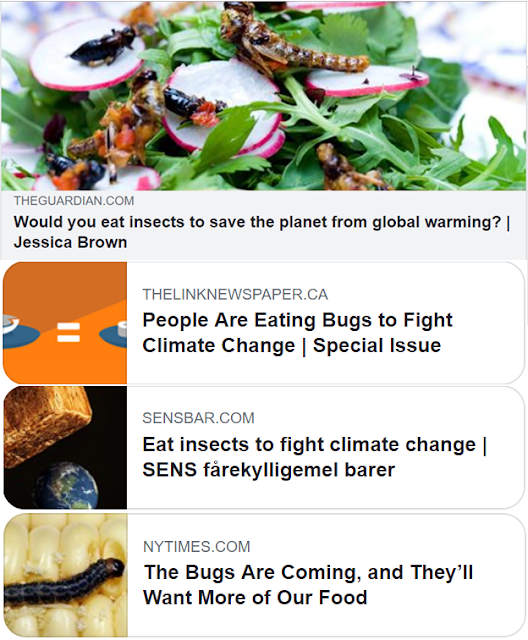 https://thelinknewspaper.ca/article/people-are-eating-bugs-to-fight-climate-change?
Insects like crickets emit less greenhouse gas than livestock, and the Food and Agriculture Organization of the United Nations found that pigs produce ten to one hundred times more greenhouse gases per kilogram than mealworms. (March 6, 2018)

https://www.sensbar.com/dk/blog/eat-insects-to-fight-climate-change?
If we compare, for example, crickets to cattle and chicken in terms of farming efficiency, it becomes apparent that they are the superior choice.
To produce the same amount of protein crickets need 12x less feed than cattle, and half as much as chickens.
Crickets also only need 15l of water compared to the 30 000l of water that cattle need and 2300l that chickens need.
Crickets will require only 15m2 of farm land compared to the 250m2 for cattle and 45m2 for chickens.

https://www.ed.ac.uk/news/2017/edible-insects-could-cut-harmful-emissions?
The team, which includes scientists involved in the N8 Research Partnership’s AgriFood programme, says halving global consumption of animal products by eating more insects or imitation meat would free up 1680 million hectares of land – 70 times the size of the UK.
Similar land savings could also be made by switching from the current mix of animal products to diets higher in chicken and eggs, the team says.


That's from the Univ. of Edinburgh, UK. agh.

The Guardian again, they announced last week that they will limit or discontinue their climate blogging. ????
https://wattsupwiththat.com/2018/10/27/breaking-guardian-climate-change-retreat-will-discontinue-its-science-and-environment-blogging-networks/
---------------