I am reposting this press release by the Heartland Institute last Saturday. I believe that the benefit of fossil fuels, like 24/7 electricity with no blackout even for a minute, fast transportation in land, water and air, far outweigh whatever is the imagined social cost and 'damages' created by fossil fuels.
--------------

OCTOBER 5, 2018 – More than 100 leading scholars from 12 countries have issued a report contending “the global war on fossil fuels ... was never founded on sound science or economics” and urging the world’s policymakers to “acknowledge this truth and end that war.” 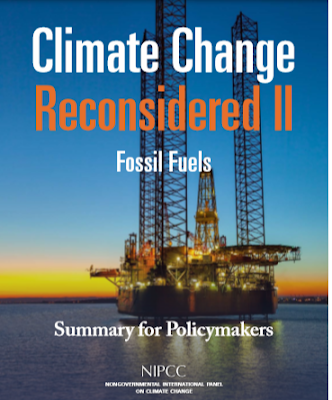 The Nongovernmental International Panel on Climate Change (NIPCC), an independent organization founded in 2003 to fact-check the work of the United Nations on the issue of climate change, today released theSummary for Policymakers of Climate Change Reconsidered II: Fossil Fuels. The 27-page Summary provides an early look at a 1,000-page report expected to be released on December 4 at a climate science symposium during the United Nations Conference of the Parties (COP-24) in Katowice, Poland.
In the new NIPCC report, 117 scientists, economists, and other experts address and refute the United Nations’ Intergovernmental Panel on Climate Change (IPCC) assertions that the impacts of climate change on human well-being and the natural environment justify dramatic reductions in the use of fossil fuels. The Summary provides more than 100 references to peer-reviewed literature, while the full report provides nearly 3,000 such references.
Click here to read the Summary for Policymakers report in digital form (PDF).
For more information about the Summary for Policymakers, NIPCC, and The Heartland Institute – and to talk to authors or editors of this report – contact Director of Communications Jim Lakely at jlakely@heartland.orgor 312/731-9364 (cell).

Among the findings reported in the Summary for Policymakers:

·        Fossil fuels deliver affordable, plentiful, and reliable energy that is closely associated with key measures of human development and human welfare. There is a strong positive relationship between low energy prices and economic prosperity. Economic prosperity in turn is crucial to human health and welfare. Wind and solar power are incapable of delivering the affordable, plentiful, and reliable energy that is delivered by fossil fuels.

·        Reducing fossil fuel use to achieve dramatic reductions in carbon dioxide emissions would inflict tremendous economic hardship. Reducing greenhouse gases to 90 percent below 1990 levels by 2050 would require a 96% reduction in world GDP, reducing per-capita GDP to $1,200 from $30,600 now forecast. Per-capita income would be at about the level it was in the United States and Western Europe in about 1820 or 1830, before the Industrial Revolution.

Scientists and experts will be in Katowice, Poland the week of December 4 to publicly release the full volume of Climate Change Reconsidered II: Fossil Fuels. Credentialed media are invited to attend the December 4 symposium to learn more about the report and question some of the scientists who agree with its findings. Details on where and when that symposium will be held are coming soon.
---------------