Last year, October 12, 2017, I posted this quote and photo and argued that this further disproves the point by those who argue that "Robots, AI and modern machines will cause massive displacement of labor." 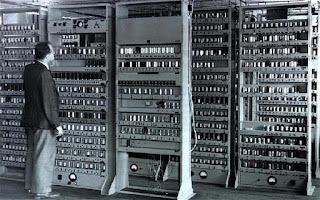 "Computers in the future may weigh no more than 1.5 tons."
-Popular Mechanics prediction, 1949

I argued then that more artificial intelligence (AI) and robots = more job creation. Why?

1. ALL those machines, robots need humans to design them, manufacture their parts, assemble the parts, repair when they get "sick", upgrade them, make "firewalls" vs hacking, etc.

2. Self-driving cars, they can be hacked and the hacker will decide whether to bring the passenger to his/her destination, or at the nearest post or deep bridge at high speed. So another demand for labor to have multiple/redundant security features.

4. CCTVs and dash cams. More people are selling these stuff, more people will repair these stuff, upgrade, or dispose and replace them. These jobs were absent or unthinkable until about 3 decades ago.

5. Drones will soon become like mobile phones where almost all offices and rich households will have 1, 2 or 3 drones flying, taking videos and photos. Related jobs to explode into hundreds of thousands of people selling drones, repair shops for drones, accessories for drones, and so on.

I do not see massive displacement of labor. On the contrary, I see massive creation of new jobs that were not there or "unthinkable" some 2-3 decades ago.

In farming, very few Filipino rice farmers now use animals (cows, carabaos) for land tilling, they use hand tractors or rotor-cultivators or big tractors. On the way out are manual harvesting of rice as more combine harvest + threshing tractors are used. Farmers' output and net income is higher with the use of machines.

The poor now seldom ride bicycles or cows, they drive their own motorcycles, tricycles, or 2nd/3rd-hand cars. With faster mobility, they can do more things, which helps improve their productivity.

Meanwhile, producers and businesses that enjoy higher profit by using AI either invest more, or expand their investment somewhere else, and that creates new jobs. Or they spend more, instead of having only 1 big house, they have 2 or 3 big houses, and that spurs construction and demand for steel, cement, appliances, other capital and consumer goods.

Engineers, managers, employees of a company that employs lots of AI will experience higher income as the company makes bigger profit. What do they do with their higher income? Obviously they don't burn or throw away the extra money, they will (a) invest part of it, the firms that get their investments can expand and hire more people. Or (b) they spend more, instead of eating out once a week, they eat out 2x or more a week, which creates or sustains jobs in the resto, hotel, bars, related businesses.

Meanwhile, yesterday's bicycle mechanic becomes today's motorcycle mechanic. Tomorrow he becomes a car or bus mechanic and if he perseveres further, he can become a plane or chopper mechanic in the coming years.

Trivia: from the movie "Blast from the Past", see this quote: "He has a computer...in the house?"  https://www.youtube.com/watch?time_continue=4&v=Fs8q80NG41s

Having a one-ton computer in the house was unimaginable then.