The government recently announced that it will suspend part 2 of the oil excise tax hike this coming January 2019. So another increase of P2/liter for both diesel and gasoline will be temporarily suspended but the tax hikes in 2018 of P2.50/liter for diesel and P2.65/liter for gasoline (from P4.35 to P7.00/liter) will remain.

The reason given is that both the Senate and the Department of Finance, as well as Malacañang, believe that Dubai crude prices will exceed the $80/barrel this October to December and might reach $100/barrel in 2019. So instead of waiting for January 2019, they already announced it ahead.

But the real reason not admitted by the government is that they are scared to lose votes in next year’s midterm elections because of spiraling inflation. Since they cannot have more tax money and more votes at the same time, they suspend oil tax hikes part 2. Then they can play the “we are sensitive to public sentiment against high inflation” card even if they remain insensitive to retain the oil tax hikes this year, the coal tax hike part 2 will still proceed. 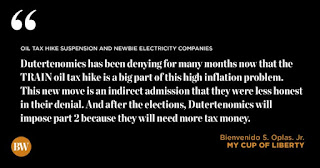 Dutertenomics has been denying for many months now that the TRAIN oil tax hike is a big part of this high inflation problem. This new move is an indirect admission that they were less honest in their denial. And after the elections, Dutertenomics will impose part 2 because they will need more tax money.

Below are estimates of the impact of TRAIN oil and coal tax hikes. The first estimate on WESM prices are from Atty. Saturnino Juan, President of the Independent Electricity Market Operator of the Philippines (IEMOP), made during the Stratbase-ADRi forum on “Energy Outlook” last Sept. 27.

The second estimate is from Dr. Ramon L. Clarete in his paper, “Electricity prices and TRAIN” published by EPDP last February 2018.

The third estimates, on impact on fare hike petition by buses, are mine. The P0.70/km. and P0.55/km. fare hike petitions were made around July this year when domestic oil prices were only around P11-12/liter over December 2017 prices. So the oil tax hike constituted around one-fourth (1/4). 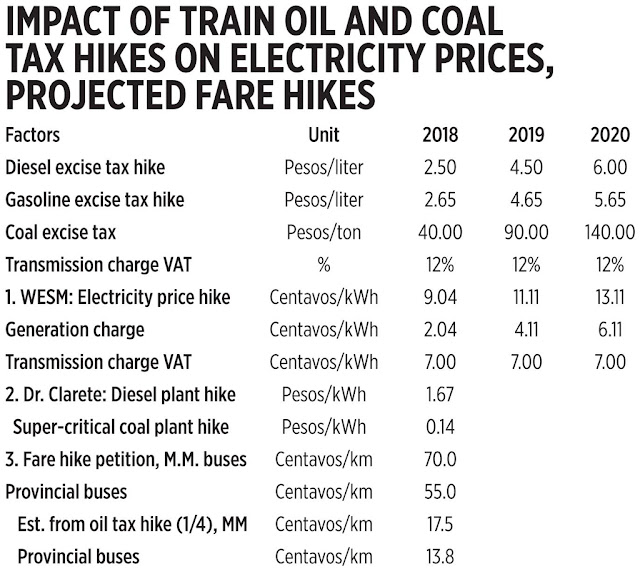 Also recently in the energy sector, two newbie players sprouted out of nowhere and have become potential dominant players via legislation.

It is a no-or-little track-record corporation that wants to do anything they want — can connect anywhere, can build their own grid anywhere, can carve out to DUs franchise areas. And because they have a “super franchise” by legislation, they can possibly issue a sort of “mini-franchise” on other companies. Clear cronyism.

It will be another anti-EPIRA corporation that can undermine the ERC’s power to regulate the competitive operation of the electricity market.

The other newbie is the MORE Electric and Power Corp. (MORE Power) seeking to take over the current franchise area of Panay Electric Company (PECO) serving the big Iloilo City and other parts of Iloilo province.

Business uncertainty is obviously created in Iloilo. Congress should be more transparent in its issuance of legislative franchises to minimize this uncertainty and dispel accusations of favoritism.
-------------