A European wind-solar developer and lobbyist responded to my column, Cheap, stable electricity vs climate alarmism last September 24, 2018. The letter was published in BWorld last October 10. Reposting it below.
--------------

AS ONE of the climate alarmists Bienvenido S. Oplas, Jr. refers to in his opinion piece of September 23 (“Cheap, stable electricity vs climate alarmism”), I welcome the debate he has opened.

Opinions are one thing, facts are another. Our species emerged over 3 million years when there was a stable quantity of CO2 in the atmosphere, and this was the figure up until industrialization: 270 parts per million. Now it is 405 and rising rapidly. This means that we are capturing more energy in the atmosphere than we used to. How much, I hear your readers ask? We are capturing the energy equivalent of 4 Hiroshima atomic bombs each second. In fact since 1998 we have trapped the energy of 2,667,000,000 Hiroshima bombs in the atmosphere.

Cause for alarm? I think so.

In bidding for generation in Chile during 2016, where there is no subsidization of renewable energy, my company bid $4.1 cents per unit of electricity for 20 years.

This was for firm power, which means my company had to supply the equivalent of what coal or gas supplies. No variability, no intermittency, pure clean power that releases no CO2.

We will generate firm power from renewable energy at $4.1 cent per unit of electricity, which is less than half the price of coal-fired generation.

Even old coal plants, which had its capital cost paid off, could not compete against new wind and solar. They won no contracts. 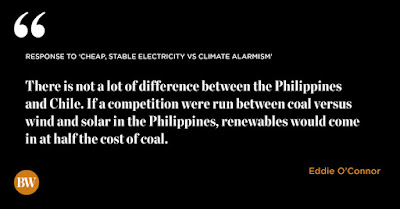 There is not a lot of difference between the Philippines and Chile. If a competition were run between coal versus wind and solar in the Philippines, renewables would come in at half the cost of coal.

I notice that Mr. Oplas is associating himself with an invite-only conference where there will be no challenge to his views. The only way to get to the truth is to issue the following challenge to Mr. Oplas: Let us choose a public auditorium and let us have a debate on energy policy in the Philippines. I guarantee the putative audience that I can prove that renewables are great for the Philippines. Great for firm power, great for price, and great for the environment. I will even pay for the venue.

I would love to see the Philippines cut the price of electricity in half, just as Chile has done, by adopting a competitive system for selecting the next tranche of generation.

Posted by Bienvenido Oplas Jr at 8:38 AM