I forgot to post this earlier but these two screen shots were fb posts by a DILG UnderSecretary last September 07, 2018.

These are words of defensive minds, perhaps bright in politics and local government but a 3rd-rate mind in economics.

1. "If the anti-inflation efforts will be put in place..."

The pro-inflation efforts of the administration were the various tax hikes under TRAIN law. High world oil prices, high US interest rates, Peso depreciation, only exacerbated the adverse impact of TRAIN law. To fight or reverse the inflationary pressure, the admin should reverse those oil tax hikes, or cut taxes somewhere that will mitigate the damage caused by those tax hikes.

This table was shown by Densing in that fb post: 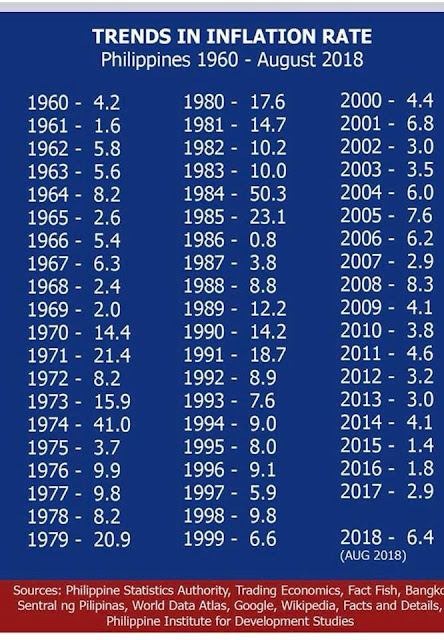 The multiple sources are funny. PSA and/or BSP can give those numbers. Anyway, many Duterte officials and supporters use the argument, "Naka-survive nga tayo sa 50%, 23% inflation rates noong 1984-85, aangal kayo sa 6.4% inflation?"

Precisely that we should not aspire or even justify the current high inflation because it is bad and anti-consumers. Besides, we have already experienced a 1.4% inflation rate in 2015 (based on CPI=2006, if CPI = 2012, inflation that year was only 0.7%), why is 4.5% or 5% justifiable?

Finally, despite the rise in world oil prices, rise in US interest rates, many Asian economies have experienced lower inflation in 2018 ytd than in 2017. 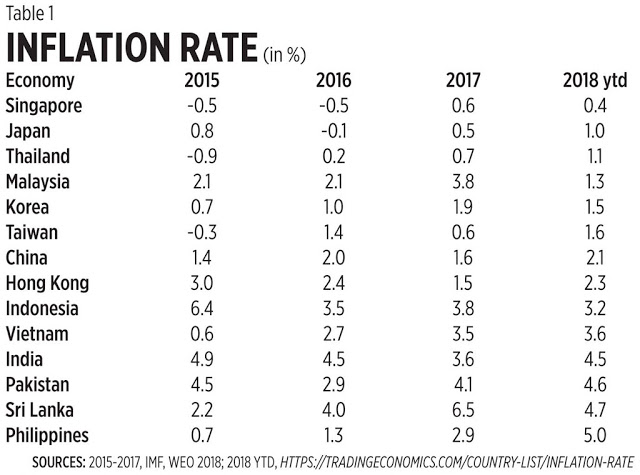 The Duterte administration is enjoying and frolicking with more money taken from the pockets of the citizens via TRAIN law, on top of existing multiple taxes. Hence, the dishonesty to admit the damage created by that law in the current high inflation problem.
Posted by Bienvenido Oplas Jr at 2:05 PM