Last week, I have a brief and friendly debate in fb with a friend Rodney, who suggested that all mining activities in the Philippines should be closed because of the various environmental damage they cause. I countered that he should also give that advice to Australia, Canada, USA, Russia, Indonesia, Sweden, UK, Chile, etc. They are among the biggest mining exporters in the planet.

Rod cited two cases: recent landslide in Cebu where many workers died, and the Placer Dome or Marcopper mining disaster in Marinduque many years ago.


Itogon-Benguet, Cebu landslides, other past landslides were caused by so-called "small-scale" mining and quarrying, not by big corporate mining which are under strict monitoring by DENR, LGUs. Mining in the US, Canada, Australia, etc are all done by corporate players, no, zero, nada ‘small scale’ mining.

The Marcopper mining disaster indeed was bad, it happened more than two decades ago and Marcopper paid a heavy price for that both in money and corporate brand/image. But if people cite a failed corporate miner, they must also consider non-failing corporate miners, lots of them. No landslides, no death, no dirty tailmines.

There is also a tendency for people who live and work far away from successful and responsible mining towns and provinces, to just advocate total mining ban. They care little about lost jobs, lost community projects like free but private hospitals and schools, lost local and national taxes. They have their own jobs anyway. 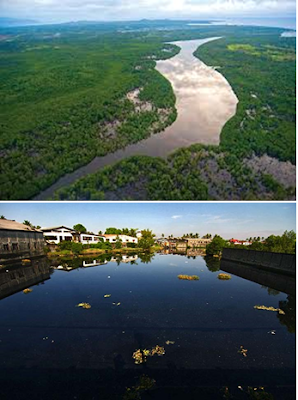 Pictures, top is Rio Tuba River in Bataraza, Palawan (with mining); below is Marilao, Bulacan River, (no mining).

I have seen Barangay Rio Tuba mining, I went there about four years ago. One can go swimming, fishing, it's clean. The "blighted conditions of many communities affected by mining" is imaginary and emotionalism, hyped up by Gina Lopez and other dramatists.

One can get cancer from inhaling black smoke of big buses in HK or Metro Manila. But people don't lobby for the closure of those buses and jeepneys, they don't get emotional on these, only in mining emotionalism,

Mining in rio tuba is about 40, or 60 years already. One can see the place's population explosion, not implosion or reduction. People with stable jobs and free/cheap community projects tend to live longer, healthier, they expand faster.

On forests and deforestation, a mining company which have say 20,000 has. only mines about 100 hectares at anytime. The rest are for structures like housing, hospitals, roads; then future mining areas; then mined out that have been reforested.