The Duterte government is known for political environmentalism and recycling — it recycles its heavily tainted officials, sacking them from one post only to be given another post in another government agency. The Bureau of Customs in particular is becoming more known as a “blinded” facilitator of multibillion pesos worth of imported shabu smuggled into the country.

The World Economic Forum (WEF) publishes an annual report, the Global Competitiveness Index (GCI) and GCI 2018 was released two weeks ago. The good news is that the overall rank of the Philippines has stabilized at 56th-57th the past three years.

The bad news is that the country’s rank in Pillar #1, reliability of institutions, obviously the most important out of 12 pillars and components, has been declining and eroding. There is overall decline of the rule of law, decline of reliability of the police and judicial independence, and increase of organized crimes and terrorism over the past four years. I skip the 11 other pillars and focus on some components of pillar #1. The trend can be depressing (see table). 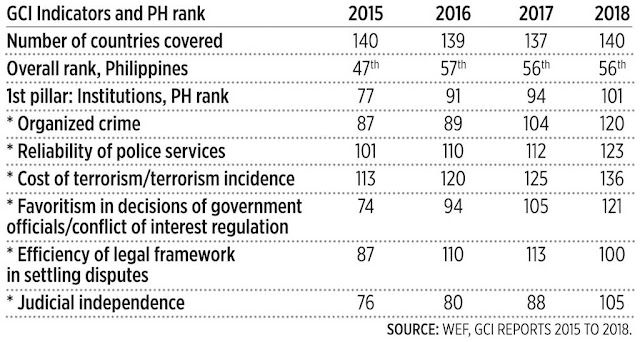 Where investors are less secure about their own safety and their businesses, we can expect a flatline if not decline in business optimism, which is countered somehow by the Philippines’ most important advantage now — a big and young population, meaning more workers and entrepreneurs, more producers and consumers.

Meanwhile, a garbled competition policy by the Philippine Competition Commission (PCC) penalizing both Uber and Grab for their merger last April will be another uncertainty factor that potential big foreign players will note if they ever think of coming in.

Among the most important factors for real competition to kick in is the existence of a “contestable market,” which is zero or minimal cost of entry and exit. New players entering a sector anytime so long as they have sufficient resources, then exiting it when the projected revenues and profit do not materialize and before they lose more money.

The exit of Uber in the Philippines and other ASEAN countries was a global headquarter decision, not country manager’s decision. When Grab became the surviving entity, it inherited the expectations and combined demand level (about 600,000 bookings a day) but not the combined supply of transport network company (TNC) cars and drivers because LTFRB has not acted on the franchise application of 8,000 cars out of total 19,000 Uber cars before the merger.

So while demand remains the same but supply has declined, the supply curve shifts to the left, the immediate results are (a) longer waiting time for passengers, and (b) higher fares via higher surge pricing as a form of price rationing. Those who are unhappy with the higher price will seek the regular taxi or aircon vans/UV express, P2P buses, regular buses, and so on.

Thus, PCC’s penalty of P16 million vs Grab and Uber is wrong. The decline in supply of TNC cars, the longer waiting time by passengers, was caused by LTFRB, not by the merger. Penalizing players for a problem caused by another government bureaucracy is a policy signal to potential big players and competitors that the same level of penalties and harassment can be applied to them someday once they come here. There is high entry cost, high exit cost, far out from being a contestable market. Bad business signal.

Another garbled transportation policy is the heavy fare control of buses, jeepneys, taxi and UV express imposed by the LTFRB by granting a small fare hike purportedly to “protect the public.” When the operating costs (high oil taxes and prices, etc.) keep rising but the revenues per passenger do not catch up, public transportation companies will either (a) jampack their buses and jeepneys with more passengers, and (b) cut costs somewhere like extending the use of near-bald tires, using cheaper but less reliable spare parts. Either way, passenger convenience and safety is compromised, which defeats the LTFRB’s purported goal.

Government must focus on the rule of law, not rule of incumbent politicians and bureaucracies. More competition favors the consumers and passengers. More regulations and prohibitions only favor bureaucrats and their corrupt ways.