This is the country’s highest inflation rate in nearly a decade, since 7.2% in February 2009. The increase largely came from the food and non-alcoholic beverages index, a big component of the overall consumer price index (CPI), which increased to 9.7% last month.

So the Philippines is now the undisputed inflation king or queen of Asia. Year to date (Ytd, January to September), 2018 inflation is already 5.0%, a lot higher than the government target of 2-4% full year 2018.

Numbers below, those with updated January-September 2018 data are Indonesia, Philippines, S. Korea, Sri Lanka, Thailand and Vietnam. The rest have January-August only (see Table 1). 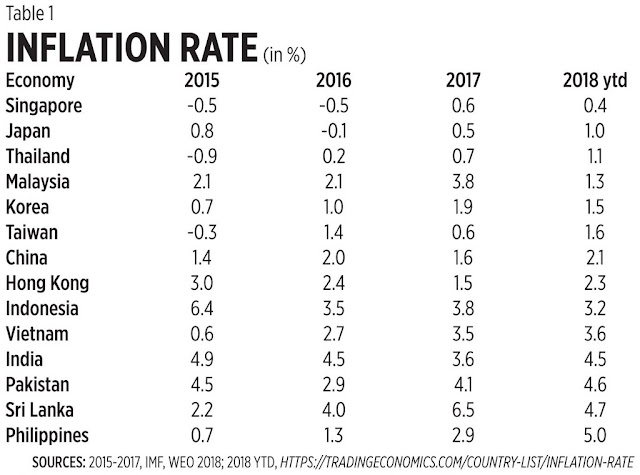 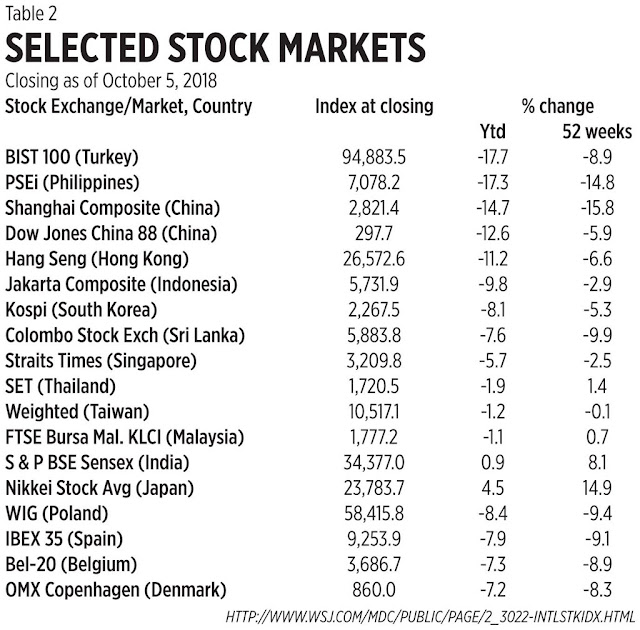 To control high inflation, the most visible action by the government comes from the Bangko Sentral ng Pilipinas (BSP) raising domestic interest rates. I do not think that this will be effective since the current inflation is largely cost-push, starting from TRAIN tax hikes in January and exacerbated by high world oil prices. This is not demand-pull inflation.

Another action is agricultural import liberalization, expanding rice importation to help reduce domestic rice prices, and replacing quantitative restrictions (QR) with tariffs of up to 35%, the bill is being hastened in Congress. The impact so far is not clearly felt as rice prices remain high.

One ‘action’ by government is non-action on fare hike petitions by buses, jeepneys, taxi, and air-con vans or ‘UV Express.’ The government has become terribly insensitive and Machiavellian in pinning down public land transportation operators to endure very high oil prices with no corresponding fare hike, except the P1 increase in jeepneys which is still not sufficient.

Domestic airlines’ petition to have fuel surcharge on ticket prices have been granted and this will have inflationary pressure from October onwards. Another pressure will come from a series of wage hikes.

One single most important measure that government can do to reduce inflation is to cut the VAT rate from 12% to around 8% and significantly reduce the exempted sectors. My best example for suggesting this is Malaysia. It had a gross sales tax (GST) of 6% until May then it was abolished in June. Its average inflation rate three months before (March 1.3%, April 1.4%, May 1.8%) was 1.5%, became 0.3% three months after (June 0.8%, July 0.9%, August 0.2%).