Among my observations in that nearly 1,500 kilometers trip are (1) too many motorcycles and tricycles now in the highway except tollways, and (2) lots of palay or corn are still dried on the highway especially in Cagayan-Isabela, these slow down overall speed of regular vehicles and may cause accidents. There is a need for more tollways around North Luzon and by extension, down to South Luzon, big provinces in Visayas and Mindanao.

The subject of private tollways and Public Private Partnership (PPP) was discussed in a roundtable forum on “Unsolicited PPP Proposals” jointly organized by the Stratbase-ADRi and the PPP Center last Oct. 15, 2018. Among the speakers and reactors were Mr. Ferdinand Pecson, current Executive Director of the Center, Ms. Cosette Canilao, former Executive Director of the Center, Dr. Epictetus Patalinghug, Prof. Emeritus of UP College of Business Administration, Mr. Romulo Neri, former NEDA chief, and Mr. Jimbo Reverente of NAIA Consortium.

Dr. Patalinghug expressed reservations on unsolicited PPP because of lack of competition, lack of transparency, and this leaves room for corruption. The original proponent can match the best offer, which may discourage further participation in the Swiss challenge.

I still support unsolicited PPP for at least two reasons. One, government officials especially in DPWH, DoTr and OP are constrained by their six-years term so the solicited PPP projects they will identify will likely be aligned with their business partners before or after their term which is a long-term engagement. And two, there are too many potential projects nationwide that many investors with long-term exposure on certain provinces and regions can think of.

Among the PPP projects that I think should be prioritized is the construction of long and elaborate tunnels under the mountains going up to Baguio City (via Kennon Road is 33.5 kms., via Aspiras–Palispis Highway or Marcos Highway is 47.2 kms). Then the mountainous Dalton Pass connecting Nueva Vizcaya and Ecija provinces. Buses and cars are crawling on those roads (especially in Dalton Pass) as there are many big, long and heavy trucks, sometimes tricycles, negotiating the climbs and curves.

It will be a partnership between mining firms and tollway firms. The cost of construction and, hence, the future toll rates will significantly decline because mining firms will get all the rocks and minerals, metals and non-metals and, hence, will contribute big money for such extraction and tunnel boring.

The advantages of these projects are (1) safety: accidents and deaths due to landslides, cars and buses falling off deep cliffs and mountains will be eradicated; (2) faster travel time: there will be no intermittent landslides blocking roads, tricycles and bicycles on the roads; and (3) huge employment generation in mining and construction.

Anti-open pit mining environmentalists who love to travel across the country can support this as this is tunnel mining, not open pit, and it will quicken their travels.

For mining companies, this is an opportunity for them to join big PPP infrastructure projects while retaining their core business. Many metallic products retain their high prices compared to a decade ago, like gold, silver and lead (see table). 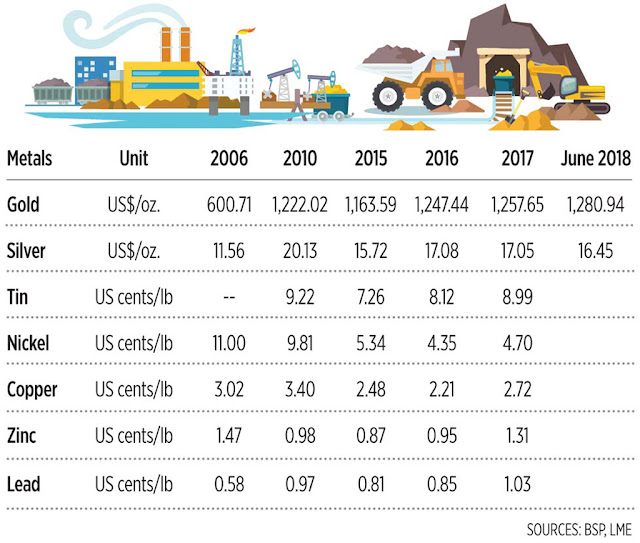 For toll road companies, this is a good exposure to the engineering skills and machineries of miners in boring deep, long distances.

Meanwhile, the newly proposed mining tax bills in Congress tend to be more extortionary. TRAIN law has raised the mining excise tax from 2% to 4%, the new bills will impose variable royalties on mining margins of 1-5% for firms outside designated mineral reservations.

These policies do not recognize the job creation, community development, high taxes paid, and soon toll road-tunnel development functions of mining. Government should step back from more taxation.
--------------