Yesterday, a lecture on “Capitalism and inclusion under weak institutions” was delivered by national scientist Dr. Raul Fabella, my former professor at UP School of Economics and fellow columnist here in BusinessWorld. Another columnist Romy Bernardo mentioned the lecture in his column here last Monday.

Dr. Fabella talked about the primacy of fighting poverty and not inequality per se, the unwarranted expansion of state and politicians’ powers and regulations to sectors and services that are beyond their competence, the resulting government failure as government intervenes more and more supposedly to correct a perceived market failure, the consolidation of capital and investments into conglomerates that can somehow check the government’s over-arching interventionism, both local and national.

The PECO franchise bill at the House of Representatives was filed in Congress in July 2017 and after two hearings in November that year, end of story. MORE Power franchise bill on the other hand was filed only in August 2018 and was passed on third reading in just one month, faster than even Malacañang’s priority bills.

I asked some friends living in Iloilo City, two of whom are faculty members of UP Visayas, how their experience is with PECO, if bad or good in terms of pricing and power supply stability.

One friend who also frequents Manila and Zambales said, “I haven’t noticed a real difference between PECO and Meralco and the electric cooperative in Zambales. In my 15 years in Iloilo, the reliability of electricity has certainly increased. We used to regularly suffer from blackouts — once a week or more though often for only a few minutes — but that is no longer the case. I am not sure why. It could be because of the coal power plants that were built more than PECO. I’m just offended that Imperial Manila gets to decide this issue. It seems to me that the people who have to live with PECO should be the ones that make the decision.”

Good points – why the franchise and permit to operate electricity DUs and cooperatives are centralized in Congress and not decentralized in provinces and cities where the DUs operate? Because of the Constitution.

A related point, why financially-muscular MORE Power would go for legislation and take over an entire franchise area – which is very politically controversial and generator of business uncertainty – when they can compete with PECO and all other DUs and electric cooperatives nationwide via the retail competition and open access (RCOA) provision of the EPIRA law of 2001?

Becoming a retail electricity supplier (RES) to serve the “contestable customers” (CCs) or those that consume 750 kW or more is not politically controversial, will not require a Congress franchise, only an ERC accreditation, and one can go national and compete with several other RES.

Below are some numbers on the implementation status of retail competition. It is a good guide for those contemplating to enter the Philippines’ electricity supply and distribution sub-sector. Minus the Supreme Court TRO on RCOA implementation around February 2017, the number of CCS and RES players should be expanding fast by now. 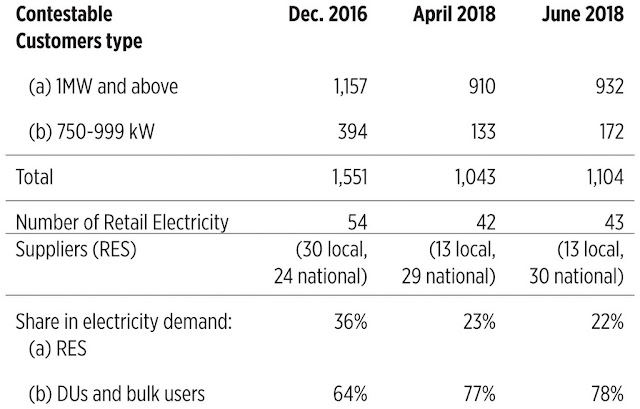 By going through legislative assault where Congress sat and did not act on the franchise renewal of PECO while its own franchise bill was approved in legislative lightning speed, MORE Power has put itself in the eye of public criticism of legislative favoritism if not cronyism.

Perhaps this is a lesson that the power of the legislature to create franchises should be removed in the Constitution. Like power generation, power distribution should be deregulated and non-franchised.

Capitalism in electricity distribution must get accreditation only from DoE and ERC which assess players based on technical grounds, not on political and cronyism factors.
---------------