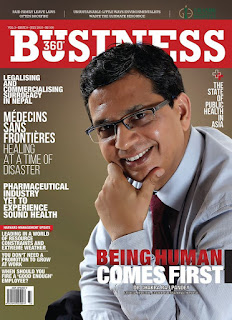 * This is my article for July 2015 issue of the business magazine in Kathmandu, produced monthly by Media 9.


The state of public health in Asia

We often hear complaints and  litanies about how our lives are deteriorating and how our health condition is getting more “critical.” Are there solid basis for these statements aside from the subjective observations and emotional sentiment attached to them?

Let us check some health data and see how valid or invalid those observations are. The Asian Development Bank (ADB) has a good compilation of social and economic data spanning for two decades or more, so  we can see a trend of improvement or deterioration of the social  and  economic lives of Asians. 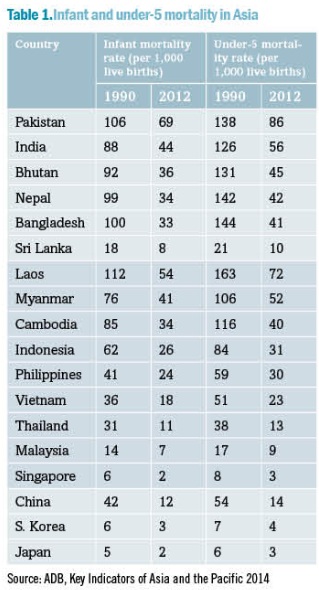 Below, mortality or rate of death among the young, infants and children below five years old.

There have been drastic improvements in the health condition  of young Asians. Mortality rate for both infants and under five years old in just 22 years were slashed by half in India and Pakistan, and by one-third in Nepal, Bhutan and Bangladesh. A great achievement.

The same trend of drastic reduction in mortality rate for the young is observed in South East Asian countries. In the case of developed economies like Singapore, S. Korea and Japan, the already low  figures have further gone down.

In the past, tuberculosis (TB) was a major killer infectious disease in many countries in  the developing  world. Drugs and treatment against various bacteria that cause and spread the disease were not so developed, and the system of isolation for infected people and proper hygiene for the rest were also  not well-developed. 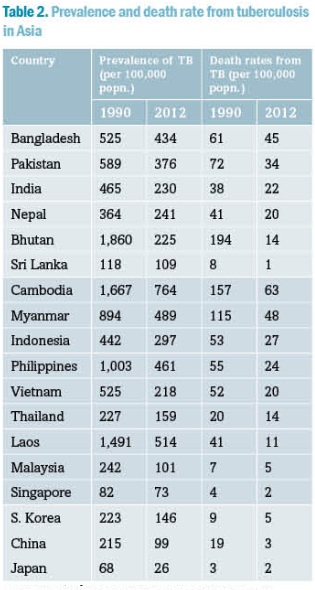 Consistent with the trend and  data in the above table, death rates from tuberculosis have also significantly gone down after 22 years, slashed by half in Nepal, Pakistan  and  India. Bhutan made very significant progress here. Sri Lanka has an excellent record, comparable to the developed Asian economies like Singapore and Japan.

The same trend is observed among South East Asian countries. Cambodia showed good improvement but its death rate from this disease remains very high, 3x that of Nepal, India and Vietnam.

So if less people are dying, that means the average life span of Asians as well as other people in the world is rising, right? 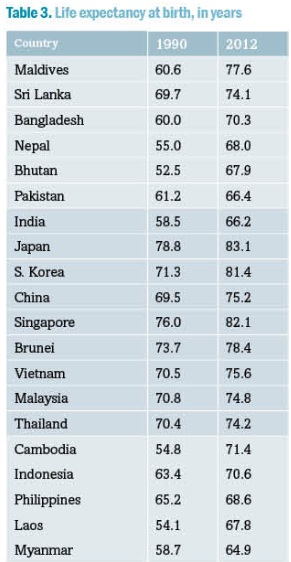 The numbers below confirm this. Many countries in South Asia showed significant improvement here, life span rose by an  average of 14 years after 22 years. For the people in South East Asia, the increase in life span has increased by an  average of five years. But in the case of Laos, Cambodia and Myanmar, the harsh dictatorship and even genocide they experienced meant very low life span in the 1970s, 80s up to 1990. Diseases plus political murders have cut short the lives of millions of people there until the 80s.


The three tables and sets of data above have shown  that the pessimistic and emotional view that “our lives are deteriorating, public health is in critical condition” has no basis. Our lives are improving, we are living healthier and longer. And that means we now have longer productive years. Instead of dying at age of late 50s or early 60s, many people now remain productive even in their late 60s or 70s, are able to enjoy the company of their grand children much longer. 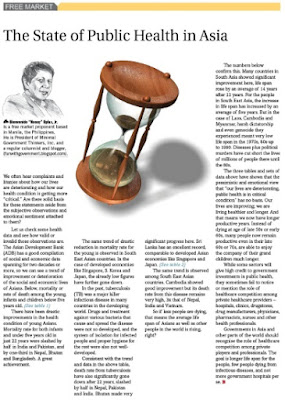 While some sectors will give high credit to government investments in public health, they sometimes  fail to notice or mention the role of healthcare competition among private healthcare providers – hospitals, clinics, drugstores, drug manufacturers, physicians, pharmacists, nurses and other health professionals.


Governments in Asia and other parts of the world should recognize the role of healthcare competition among private players and professionals. The goal is longer life span for  the people, few people dying from infectious diseases, and not more government hospitals per se.
----------