Capital, like labor and technology, simply wants to be mobile across islands, provinces, countries and continents. They are like migratory birds and large fishes/mammals, they go to areas that are hospitable to them, allow them to survive and flourish.

Economies that are more open to global trade tend to attract more foreign direct investments (FDI), like Hong Kong and Singapore, but Japan has a different story. 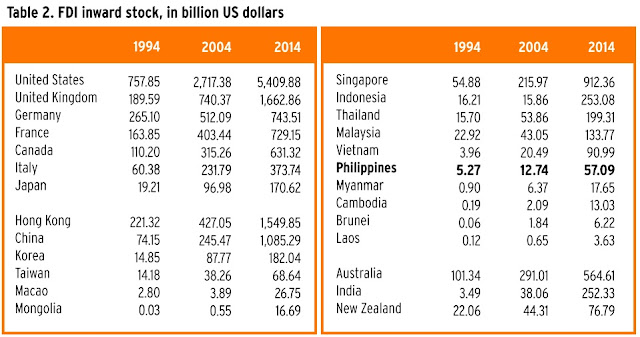 Data is from UNCTAD, World Investment Report (WIR) 2015, http://www.unctad.org/fdistatistics. This table is from a paper produced by my sister's auditing firm. I will blog about it soon here.

Meanwhile, here are some reports and papers on the subject. 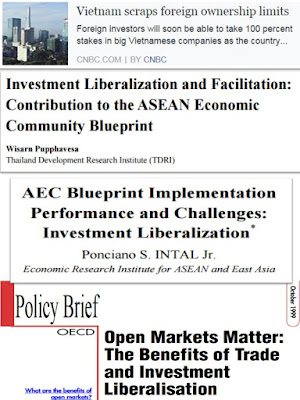 News from CNBC, June 29, 2015, Vietnam is liberalizing further its foreign  investments policy, except that
"The announcement gave few other details, although it said industries such as banking that are covered by separate rules would keep ownership limits at 30 percent."

“In conclusion, it is worth noting that investment liberalization is only one of many factors that determine the investment attractiveness of a country, as we have seen. A number of them are also within the purview of the AEC. Thus, implementing those measures (e.g., regulatory improvement through the National Single Window) should  generate greater synergy between them and investment liberalization, which should result in an improved investment climate.”

The major concerns of foreign investors in many countries, from a presentation by Dr. Rafaelita "Fita" Aldaba of PIDS then, 2012, "INVESTMENT FACILITATION AND LIBERALIZATION IN THE AEC: CHALLENGES FOR THE PHILIPPINES", http://aric.adb.org/.../Investment%20Facilitation%20and... 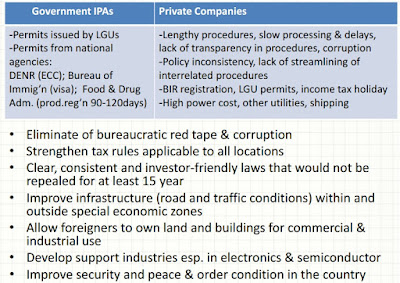 Meanwhile, a note and  warning from this  article, 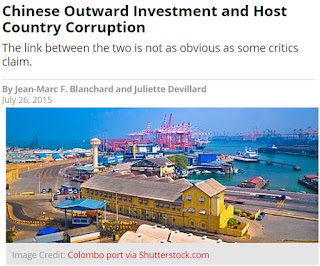 "billions of dollars of Chinese investment in countries such as Angola, Sudan, and Venezuela, which fare quite poorly in the pertinent international rankings. Moreover, there are numerous reports of Chinese companies paying bribes to secure a major port deal in Sri Lanka, to try to obtain a major broadband telecommunications deal in the Philippines, and to secure lucrative oil and gas opportunities in Kazakhstan...." July 26, 2015. http://thediplomat.com/.../chinese-outward-investment.../