Hey Joe, what's happening? An economy that has been on budget deficit for decades should not aspire to have a fiscal surplus? Always living beyond one's means, never living below one's means? Populist but lousy, Joe. 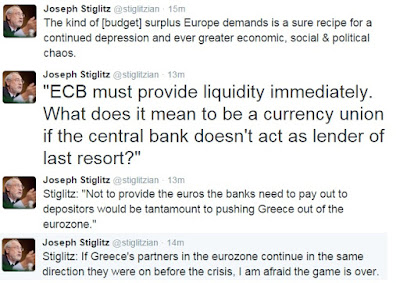 These are screen shots of Joe Stiglitz's tweets last night. The man is playing populist politics here. Tsipras and the Greek majority have declared loudly and clearly that they won't aspire for fiscal surplus, that endless deficit and borrowings are cool and their entitlement mentality is correct. Simply because they are in the Eurozone, they shd be entitled to e ndless bail outs by other Euro economies. Lousy and opportunist thinking.

I replied to Joe Stiglitz on twitter. I doubt if he will bother to respond, the man's head is full of ego and populism. 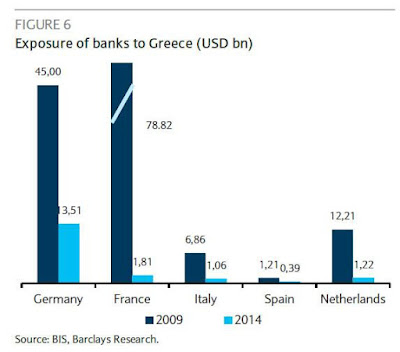 This chart is from zero hedge's tweet yesterday. This is one reason why Greek debt mess isn't spreading to other banks.

Greece debt keeps rising and Joe Stiglitz thinks the debt should continue rising via more EU bailout funds. The creditors are irresponsible and insensitive while the debt addict, the debtor is right and cool? Lousy. 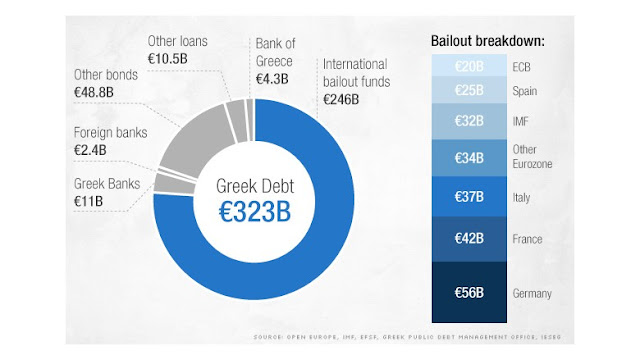 No sympathy for Greece leftism and socialism. EU regional central planning is better for its national central planning. Equally heavily-indebted Cyprus, Ireland and Portugal managed to escape a full blown fiscal crisis because they heeded EU's austerity conditions. Greece did not, and things are worsening, not improving. Chart from Bloomberg. 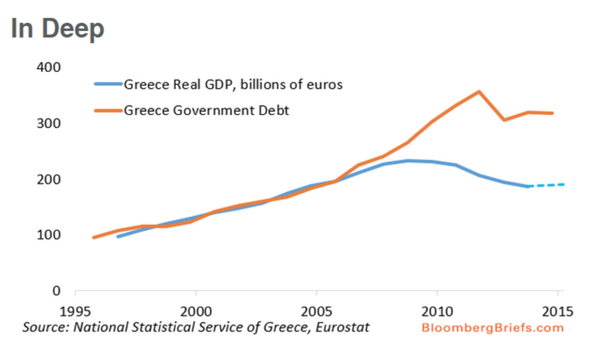 Tsipras and the rest of Greek socialists, other international socialists, should be ashamed of this development. News from Business Insider, 'Events are nowspinning out of control' in Greece
Varoufakis resigned in the middle of the night on Sunday, and news broke that Tsipras and Varoufakis' replacement — Euclid Tsakalotos — would head to Brussels for an emergency meeting on Tuesday. When they showed up at the meeting on Tuesday, they didn't have a plan.

A report from Reuters on Tuesday indicated that Greece's banks only have 2 days of cash left. And this after ATM withdrawals have been limited to 60 euros per day for over a week now.

And from Bloomberg,  EU Tells Tsipras the Party’s Over as Euro Exit DoorSwings Open, July 08, 2015.

"In a tense and at times emotional meeting, Tsipras’s European peers told him he’d failed to appreciate the efforts the continent’s voters and taxpayers had made to help the Greek people and blamed him for escalating tensions across the region. Six officials agreed to share their knowledge of the private talks while asking not to be named because of the sensitivity of the historical moment.

“Party time at the expense of others in Greece has come to an end,” Lithuanian President Dalia Grybauskaite said. “Europe and the euro area are surely unprepared to pay for the irresponsible behavior of the new Greek government.”

"There's a minuscule chance that a deal can be worked out by Sunday, but it's just that-- minuscule. Greece should now declare a general default and wipe out their debts 100%. Nationalize the banks, introduce a new drachma, force conversion of euro deposits into new drachma, get their public finances under control with sensible expenditure cuts and more serious efforts to curb tax evasion-- essentially self-directed austerity. To cushion the economic blow the government should seek aid and investment from expatriate Greeks (privatize those ports and utilities) and try to get direct financial support from potentially sympathetic countries like China, India, the US, the trade surplus countries of the Middle East and Southeast Asia, and maybe even Russia. The EU should in turn own up to their own failings and facilitate this exit by at the very least not taking any punitive measures such as rescinding Greek membership in the European economic community, and by providing humanitarian aid. The monetary union never made sense for Greece, and Greece didn't make sense for the monetary union. But they can and should remain in the EU--just not the eurozone. Preserving their membership in the European common economic area and EU nationality of their citizens will help in the coming adjustment.

It's looking to be a very hard road ahead for the Greeks. But on the upside their young citizens can now hope for growth at the end of the hardship. It has been done before-- Argentina in 2002 and before that Malaysia in 1998 were able to survive being cut off from world capital markets and were able to grow again within four years of their crisis. Much will have to change internally to get there. I only hope for them that the Tsipras government or whatever government comes after can rise to the enormous challenges ahead."

I agree with Butch. The Greeks should end their hypocrisy and opportunism of getting money from the Eurozone countries while ignoring the conditions set by their Euro creditors. Call it a spade. If they must ignore the austerity conditions, they should be consistent and ignore, dump the Euro as well. They will get more respect from other countries if they become more realistic than continuing the hypocrisy. 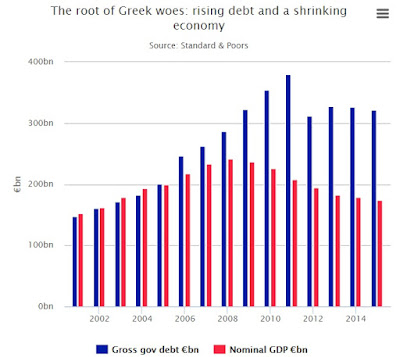 A good chart from The Telegraph, Europe is blowing itself apart over Greece - and nobody seems able to stop it, July 07, 2015.

The Greek majority should kick out socialist thinking in their minds. Tsipras and Varoufakis are just the embodiment of their socialist aspiration. They can never socialize wealth forever. They can only socialize poverty forever.
-----------