It has been raining since Saturday last week. Downpour in the morning, then the Sun showed up in the afternoon. The rains were back at night, until whole day of Sunday. Last Monday, it was cloudy but Mr. Sun would peep somehow. Later that day,  the rains are back, all afternoon classes have been suspended.

Last Tuesday, it was warm and sunny, there were classes, nice to see the Sun again for several hours. Then downpour by night, until yesterday whole day, and classes were suspended Metro Manila wide by the Department of Education (DepEd). 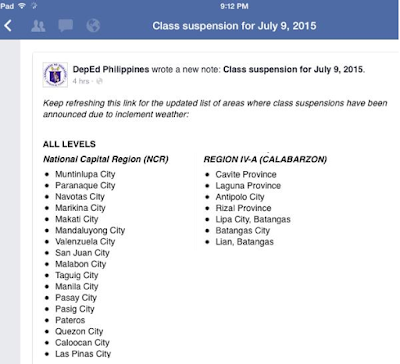 Here in Makati today, the rains have stopped since early morning perhaps. It was cloudy but not raining until about 8am, then rains on and off until noon time.

No typhoon signal today in these areas. DepEd decides on the basis of PAGASA weather forecast for the next 24 hours.

There are two important issues here. One, DepEd should limit the scope of its power to suspend classes to public schools only, and leave the private schools to decide whether to have classes or not.

Two, DepEd should consider moving the school opening to September, instead of June.

Every year, rainy season in the country is June-October, and July-September are the wettest months with an average of about three storms per month. I remember in August 2013, for two weeks, my older daughter went to school for two days only. Four days per week, classes were suspended because of almost non-stop rains.
DepEd relies on forecasts by PAGASA, whose forecasts are not exactly accurate. In fairness to PAGASA though, I think no meteorological agency in the planet can give 90-100% accuracy of weather forecast for the next 12 hours.

Notice also "Mang Tany" Nathaniel Cruz, weatherman of GMA7 and former PAGASA weather forecaster. During the hot months of March-May, his reporting on temperature forecasts was mainly about the "init factor", which on average, are 4-9 degree C hotter than the projected maximum temperatire So a projected max temp the next day of 35 C, Mang Tany (and perhaps many other weathermen and women) would report 39-44 C. It's like Middle east summer.

But they do not report "lamig factor" when it's rainy or typhoon season. Kasama kasi sa "man-made" warming religion ang reporting nila.

DepEd, please consider moving the school opening to September, not June. That way, there will be fewer class suspension. For now, even moderate rains, the tendency of DepEd and local governments is to cancel classes. Bondying na yon. 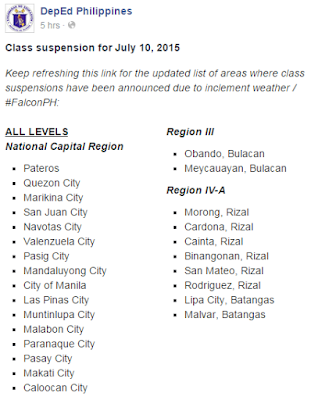 Meanwhile, another class suspension by DepEd for tomorrow. No typhoon signal anywhere in the country from PAGASA, storm "Falcon" is far out in the sea.

DepEd has lengthened basic and secondary education from 10 to 12 years. Then DepEd reduces education with frequent class suspensions. This whole week, it has suspended classes in 4 out of 5 days.

If DepEd keeps this practice of frequent class suspensions knowing that July-September are the wettest months and refuses to move school opening from June to September, then DepEd is among the major contributors of wastes in the country.

Email ThisBlogThis!Share to TwitterShare to FacebookShare to Pinterest
Labels: Department of Education, PAGASA

i am very positive to move opening of class from june to september since we enjoy a very long vacation as of this school year. i strongly recommend the author of this bill to work fast before june comes week...huh