* This is my article in BusinessWorld Weekender yesterday. 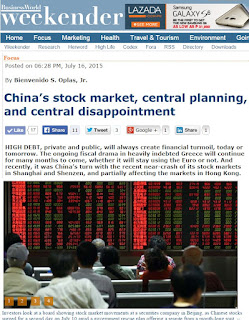 HIGH DEBT, private and public, will always create financial turmoil, today or tomorrow. The ongoing fiscal drama in heavily indebted Greece will continue for many months to come, whether it will stay using the Euro or not. And recently, it was China’s turn with the recent near-crash of its stock markets in Shanghai and Shenzen, and partially affecting the markets in Hong Kong.

Unlike the markets in the US, Japan, UK, Germany and other democratic countries, the case of China will always be internally conflicting. It is a dictatorship that abhors political competition and yet it wants to mimic economies that allow market competition.

HIGH PUBLIC DEBT
Officially, China has a gross public debt/GDP ratio of only 41% in 2014, manageable and just slightly higher than the debt/GDP ratio of Taiwan and South Korea (38% and 36%, respectively). But China has more debt than what it will officially admit.

A report by McKinsey Global Institute recently said that China’s total borrowings (individuals + companies + local and central governments + state enterprises) was 282% of GDP in 2014. This is very high for a non-industrialized economy like China.

There is high-margin lending (borrowed funds for stocks investment), reaching $323 billion last month alone, invested in the stock market by many novice, first-time stock investors numbering in tens of thousands.

STOCK MARKET BUBBLE
From 2010-2014, China’s stock market capitalization/GDP ratio averaged only about 45%. By June 12 this year, it rose to almost 100%, showing a huge asset price bubble in the first half of this year. 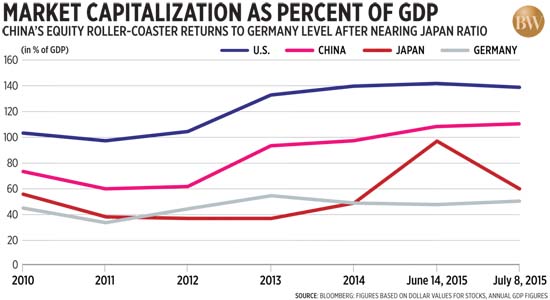 The bubble started last year when government media repeatedly announced that stocks were cheap, with the implicit understanding that the central planning authorities can control prices from falling. Millions of novice and first-time stock investors came in droves, China’s market capitalization tripled and reached $9.8 trillion, according to a Bloomberg report last June 30.

BUBBLE CRASHED
Why did the bubble burst so suddenly? There are several explanations and hypotheses for this.

One is that China is experiencing a GDP growth slowdown of “only” 7% or less, compared to 9-12% per year for the last three decades or more. Two, some government stimulus programs to shield China from various global turmoil have to end. Three, finance also follows the law of gravity: the speed and height of price rise is somehow directly proportional to the speed and depth of price decline.

The magnitude of the stock price decline was $3.9 trillion, according to the Bloomberg China Market Cap index. That was equivalent to the GDP size of Germany, larger than the GDP sizes of UK or France or Brazil, and twice the GDP of Russia. 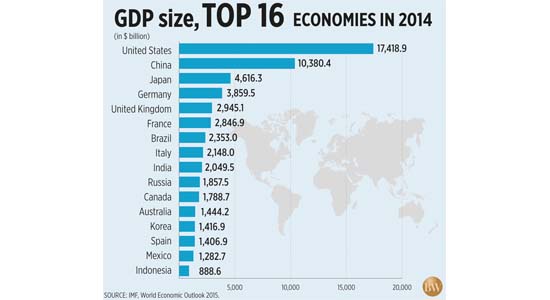 The bulk of China stock investors are the more than 90 million individuals who make up about 80% of the market, according to a survey of households.

The stocks crash was worse than the US property crisis in 2008-09, although in terms of global interconnection and contagion, the US financial turmoil last decade had a larger impact. Significant deterioration in the public debt of Greece, Spain, Portugal, Ireland, Cyprus, Italy, etc. occurred in 2009 and 2010, obviously a result of contagion from the US.

Compared to the Greece debt problem, this is much larger. Greece’s GDP size in 2014 was only $238 billion, and its total public debt was about $320 billion.

CENTRAL PLANNING FIGHTS BACK
China’s government responded with several measures. One, the central bank cut interest rates, hoping that more savings from the banks will go to the stocks market. Two, some stock traders and speculators were investigated with threats of prosecution for stock rumor mongering. Three, a number of planned initial public offerings (IPOs) were suspended. Four, outright stop in trading.

“At least 1,301 companies have halted trading on mainland Chinese exchanges, locking up $2.6 trillion of shares, or about 40 percent of China’s market capitalization. The China Financial Futures Exchange raised margin requirements for sell orders on CSI 500 index futures, while the central bank will provide “ample liquidity” to the stock market. China Securities Finance Corp. said it will buy more shares of small- and mid-cap companies.” (July 8)

“Official measures to support shares became more extreme during the week as declines deepened. They include a ban on stockholders and executives from selling stakes in listed companies for six months, an order for companies to buy equities and an investigation by the nation’s public security bureau into short-selling.” (July 10)

LESSONS FOR SOUTHEAST ASIA
Emerging economies in the region like the Philippines can draw lessons from this latest episode in regional and global economics.

1 Moral hazards. When a central planning government rallied the public to invest in the market, many investors with little or zero experience in the market came believing they couldn’t lose money since the government is big enough to guarantee returns or bail them out later.

2 Adverse selection. Millions of new novice investors have picked up the wrong timing, at a time when fiscal uncertainty hounds the EU and China was experiencing growth slowdown. Adverse selection often results in adverse results.

3 Debts and uncertainty. As public and private debts become bigger and bigger, the economic uncertainty also becomes bigger. People will never know who can pay back and when, and who will default.

4 Corporate fundamentals. Investors should do hard analyses of the fundamentals of companies whose stocks they are buying, and not just wait for cues and pronouncements from government. It can be a case where as government intervenes more, it creates more panic and price volatility.

6 Role of government. The state and its various agencies, from local governments to different regulatory agencies to monetary authorities, should focus on ensuring fair market rules rather than guaranteeing outcomes.