Transport Econ 15, On having 2 cars or more 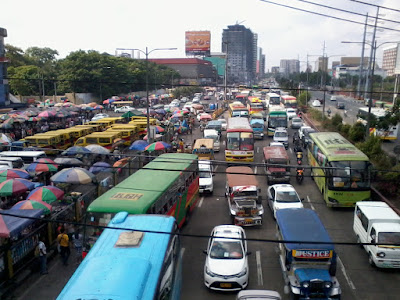 Heavy traffic in many areas of Metro Manila is a daily reality. Here for instance, Roxas Blvd. in Pasay near the Baclaran Church. I took this one Saturday morning last month, I was on a pedestrian  overpass.

Because almost everyone experiences heavy traffic, then almost everyone has a proposed solution how to solve it, which is not really a bad thing. What makes things bad is when  some people would propose solutions that will impose more restrictions on the rest of society. Like (a) prohibiting people from driving and using their own cars one day a week (aka plate "number coding" ban). Or (b) prohibiting certain modes of transportation and ride sharing (air-con vans, some provincial buses). 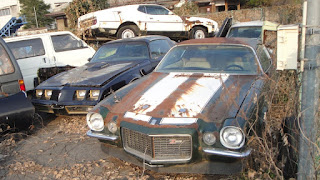 One solution proposed by some people and represented by these old, abandoned cars, is that we "bury our irrational desire for more private vehicles, have more space for mass public transportation," and "moderate our greed for cars."

People respond to incentives and disincentives. When government imposed that we cannot drive/use our car, our own private property, one day a week, some people who can afford started buying a second car, or at least a motorcycle.

Again, if you live in UP Village, or Filinvest QC, and you are going to Makati CBD or Ortigas , if you take the public transpo, it's four rides one way: (a) tricycle from house to Commonwealth ave or Philcoa, (b) jeep to MRT station, (c) MRT ride, then (d) jeep or van to destination. Coming home, the same four rides, or eight rides a day. It may be cool if one is wearing shorts and rubber shoes, but if wearing barong or corporate attire, carrying a laptop and other important docs, or big cash, would you dare taking those 8 rides a day? Most likely not.

So people endure driving their cars even in heavy traffic. But other people should not blame the hapless middle class motorists who refuse to be harassed with 8 rides a day. That's unfair. Those who wish to endure it, fine. Those who don't want to, we should not call them "moderate their greed for cars," and "greed" is defined as having two or more cars.

When the MMDA and LGUs prohibited people from driving our own cars one day a week, that is already wrong. But people comply with this ruling, and some buy a 2nd car for coding day of the main car, or when the other car is in a repair shop. But why call them "greedy" for having a second car?

Not that I own two or more cars, I own only one, an old one. But I will debate people who say that owning 2 or 3 cars are greedy. What do they know of the circumstances why some households have opted that way, an expensive way?

If parents also have to bring the kids to school before going to work, that makes 4-5 rides one way, or 8-10 rides a day or more. This is not nice nor cool. Thus people have to drive their cars. Then there are households with special needs, like bringing a sickly child or grandpa/grandma to regular medical check ups, then the couple must drive to work too, they will need 2 cars at least. Maski luma or bulok basta may air-con and functioning. To condemn them of being "greedy with cars" despite their special condition is wrong and irresponsible.

One solution to reduce traffic in Metro Manila and other major cities in the country is to allow various forms of ride-sharing and car pooling, government agencies like LTFRB, MMDA and LGUs should step back from more prohibitions, more regulations, more bureaucratism. People simply want to take one ride from house to work whenever possible. If air-con vans, if Uber system can provide this, why over-regulate and prohibit them?
Akin ang Tondo, Sa Iyo Ang Cavite" -- dividing roads in Metro Manila, 1/2 or 2/3 to cars and buses, 1/2 or 1/3 to bicycles and pedestrians.

proposal. You do not mix cars with bicycles and even pedestrians in Edsa, a very congested and major road. Not everyone is careful, whether the cyclist or motorist or pedestrian. If one or more people die in an accident in Edsa, say a novice bicyclist who suddenly swerves to the lane for cars, or a novice or sleepy or drunk motorist who swerves to the bicycle lane, who is to blame? The bicyclist, the motorist, the government, or Tony Oposa and his supporters?

Do NOT mix them in Edsa, it is a stupid idea. Bicycles and pedestrians should have their own lanes, elevated from the main road, so that cars and buses cannot easily swerve onto them.
-------------

Email ThisBlogThis!Share to TwitterShare to FacebookShare to Pinterest
Labels: traffic