* This is my article in BWorld last Friday. 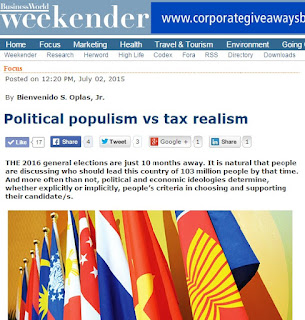 
THE 2016 general elections are just 10 months away. It is natural that people are discussing who should lead this country of 103 million people by that time. And more often than not, political and economic ideologies determine, whether explicitly or implicitly, people’s criteria in choosing and supporting their candidate/s.

The Philippines has a personality-oriented politics, not philosophy- or ideology-oriented. This is also true of other countries, to be sure. Political parties have come and gone, and others are moribund, depending on whether the key party figure remains visible and influential. Either way, candidates are easily swayed by the populist aspirations and welfarist demands of many voters.

During the two-party system that dominated Philippine politics until the Marcos dictatorship beginning in the 1970s, an ideological line, in hindsight, was supposed to distinguish the Nacionalista Party (NP) and the breakaway Liberal Party (LP). The Nacionalistas were supposed to be nationalists and trade protectionists, more state-oriented; and the Liberals were supposed to be globalists and free traders, more market-oriented. Yet both parties were ruled by the same elite, and the line that was supposed to distinguish them was blurred further by turncoatism. Two Liberals among the roster of presidents in the postwar Third Republic ran under the rival banner of the Nacionalistas and went on to uphold the supposed ideology of the Liberals. And then as now, as the presidency had always demonstrated, Philippine politics was and remains personality-driven.

Post-Marcos politics gave way to the multiparty system in effect until today, with other parties, other advocacies, giving voice to past attempts in the two-party system to present an alternative politics. Yet all these parties must accord with the practicalities of political survival by forming coalitions -- including the ruling coalition led by the LP and including its odd ally, the NP.

The foremost consideration for survival is the pulse of the electorate, and thus the mentality and behavior of politicians may generally be deemed a reflection of the mentality and behavior of the voters, as influenced further by the mainstream media and various advocacy groups. If voters think politicians are opportunistic and corrupt, politicians too -- without articulating it, of course -- think voters are just as opportunistic and corrupt. Many politicians feel there is high pressure from the voters for an entitlement and welfarist set of policies. These voters and pressure groups (including non-voters like those below 18 years old) feel that they are entitled to be given free healthcare, free education, free or highly-subsidized housing, credit, tractors, burial, etc.

It is always easy and populist to blame politicians who, in turn, take advantage of populism and the entitlement mentality by supporting high and multiple taxes, or pushing for a further increase in those taxes, so they will have additional revenues to fund various types of subsidies, including corporate welfare for crony firms.

Such political populism and welfarism coupled with corruption are costly to the taxpayers. While the politicians and governments of other countries, our neighboring countries, in particular, have their own brand of populism, their taxes are not as high as those in the Philippines. 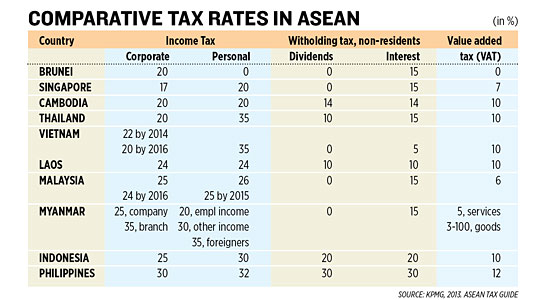 Notice that Vietnam is rather aggressive in cutting its tax rates, coupled with liberalizing their economy to more investors, local and multinational. That is a good formula to broaden the tax base and possibly realize even bigger tax revenues.

If Philippine politicians and presidentiables cannot escape following political populism, then this should be complemented by tax realism -- people and businesses dislike high and multiple taxes, so the tax base becomes narrow, the temptation/incidence of tax avoidance rises, and overall tax collection becomes smaller than its potential.

Consider also that after almost one-third of people’s monthly incomes has been taken by the government, there are other mandatory and forced contributions to government-owned social security agencies (SSS, GSIS, PhilHealth, Pag-IBIG, etc.). And from the take-home pay (net of personal income tax and mandatory contributions), government further collects many other taxes and fees -- VAT for almost everything on consumer items, vehicle registration tax for cars, franchise tax for businesses, real-property tax, etc.

And that is one criticism of the ruling LP, that it is not acting liberal enough. Many of its adopted and implemented policies are far from liberal and closer to the populist and welfarist philosophy, while eschewing tax realism too.

Another example that the LP diverges from (classical) liberal philosophy of more freedom for the citizens and limited government is the proposed Cavite-Laguna Expressway (CALAX) -- about which Dr. Raul Fabella noted in an article that “the bid parameter should have been the lowest toll charge rather than highest premium payment to the government.”

Thus, future CALAX users should pay lower toll fees (more savings in their pockets) and not pay more because of the higher payment to the current government.

Tax competition among ASEAN member-countries is happening and winners, very often, are those who offer low tax rates and carry out tax regulations that are easy to remember and manage.

Presidentiables and political parties should consider campaigning and advocating for drastic cuts in both corporate and personal income tax, withholding tax, VAT, and other types of taxes.

Bienvenido S. Oplas, Jr. is the head of Minimal Government Thinkers, a Manila-based think tank that advocates classical liberal ideas, and a fellow of the South East Asia Network for Development (SEANET), a regional center that advocates economic freedom in the region.
-----------