* This is my article yesterday in BusinessWorld's Special 27th Anniversary Report, coinciding with President Aquino's 6th and last State of the Nation Address (SONA).
---------- 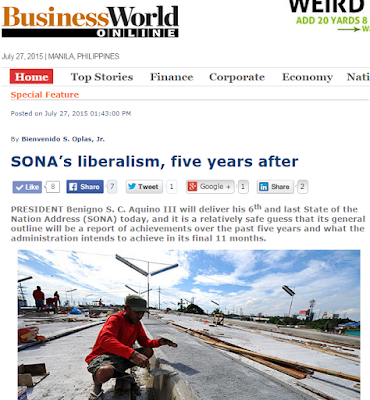 PRESIDENT Benigno S. C. Aquino III will deliver his 6th and last State of the Nation Address (SONA) today, and it is a relatively safe guess that its general outline will be a report of achievements over the past five years and what the administration intends to achieve in its final 11 months.

Reviewing the past five SONAs, 2010 to 2014, it appears that in his first SONA in 2010, the President wanted to affirm the liberal ideals of a limited and clean government, dynamic market, and principled civil society. The President is from the Liberal Party, not from a nationalist or socialist party and somehow, those ideals should be reflected in his policy formulations.

The succeeding SONA from 2012 to 2014 focused more on the various welfare and subsidy programs of the administration, especially the implementation of the conditional cash transfer program. Liberalism in theory is not focused on heavy state welfare and political populism as these are the realm of socialism and conservatism. Liberalism is about having rule of law, government as enabler, judge, and policeman of the people’s three basic rights and freedom -- right to private property, right to life against aggressors, and right to liberty against dictators and bullies.

Public-private partnerships (PPPs) were among the salient pronouncements and promises of the President’s first SONA 2010. In particular:

1. Expressways: “Some… want to build an expressway from Manila that will pass through Bulacan, Nueva Ecija, Nueva Vizcaya, until the end of Cagayan Valley, without the government having to spend a single peso.”

2. National defense. “Some... will rent the Navy headquarters on Roxas Boulevard and the Naval Station in Fort Bonifacio. They will take care of the funding necessary to transfer the Navy Headquarters to Camp Aguinaldo. Immediately, we will be given $100 million.”

3. Build-Operate-Transfer (BOT): “Projects will undergo quick and efficient processes…. a process that used to take as short as a year and as long as a decade will now only take six months.”

4. Business registration: “The never-ending horror story of registering business names, which used to take a minimum of four to eight hours depending on the day, will be cut down drastically to fifteen minutes. What used to be a check list of 36 documents will be shortened to a list of six, and the old eight-page application form will be whittled down to one page.”

Among the bills that Mr. Aquino sought from Congress were the Antitrust Law (“No monopolies, no cartels that kill competition”) and Whistleblower’s Bill “to eradicate the prevalent culture of fear and silence that has hounded our system. From 2009 to 2010 alone, cases which involved the participation of witnesses under the Witness Protection Program resulted in a ninety-five percent conviction.”

The four items above are consistent with liberalism, of lesser government intervention and more private enterprises involvement and dynamism. Also the two (and more) legislative measures.

After five years, from July 2010 to July 2015, were those four (and more) plans and promises fulfilled? Were those legislative proposals enacted into laws?

This writer interviewed Communications Secretary Herminio B. Coloma, Jr. of the Presidential Communications Operations Office about some of those issues. In particular, about #4, the business bureaucracies. Mr. Coloma said that after SONA 2010, “DTI buckled down to work immediately to simplify business registration procedures. The Philippine Economic Zone Authority also introduced minimum procedures in business registrations.”

The World Bank has been producing an important study, the Doing Business (DB) annual reports, on how easy or difficult it is to do business in different countries. Here is a summary on the Philippines. The fourth column is not part of the report, it is only added here for a comparison of positive changes or improvements, and reduction in bureaucracies; a negative figure means deterioration or increase in bureaucracies. (See chart)

Apparently, Item #s 1 and 2 in SONA 2010, the expressway to Cagayan Valley and rental of Navy HQ in Roxas Boulevard, did not take off.

Item #3 on BOT seems to be on track as there are plenty of big PPP projects that are on-stream or being implemented. These include the North-South Railway Project, NLEx-SLEx Connector Road, and NAIA Development. PPP projects for approval include LRT Lines 4 and 6, and the Batangas-Manila (BatMan) 1 natural gas pipeline project.

The proposed Whistleblower’s Law is still pending in Congress, and it is hoped that it will become law before the end of Mr. Aquino’s term and of the current Congress.

We also asked Mr. Coloma why Mr. Aquino doesn’t seem too enthusiastic in the moves to amend the Constitution and remove economic restrictions like the prohibition or limitation of foreign investments in certain sectors and sub-sectors of the economy.

Mr. Coloma said “the President has adopted a hands-off stance so far, [is] not against it but reasonably open to it.” He added that the President is just being careful because Congress might interpret it differently and this might lead to a comprehensive amendment of the charter, not just the economic provisions.

Looking up to SONA 2015, what would be the outlook for the Palace in the next 11 months?

Mr. Coloma expressed the hope that certain priority bills would become law, like the Rationalization of Fiscal Incentives, the Tax Incentives Management and Transparency Act, and others. He also pointed out the continuing need for good governance, transparency, and institutional moorings.

It should be noted that there is more emphasis on “good governance” by the Palace as the political heat leading to the 2016 presidential election rises. The liberal ideals of limited government and, by extension, “less governance” has been muted.

The political opposition and militant civil society do not show any interest in limited government. On the contrary, they show voracious appetite for further expansion of government, provided that they are the ones occupying high government positions.

Between a liberal government with muted aspiration for more market competition and a political opposition with expressed desire for a more welfarist, more populist and interventionist government, the public have a choice.

If they wish to see a more dynamic, more competitive private enterprise, they should call for less governance. If they wish to try a welfarist, interventionist government system, the case of Greece and its huge debt and fiscally unstable economy should be a gentle reminder of the danger of this option.
-----------