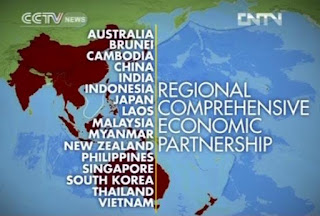 A lot of the discussions in the Philippines and other Asian countries focused on the ASEAN Economic Community (AEC), the Trans Pacific Partnership (TPP) and the Asia Pacific Economic Cooperation (APEC). Lesser known but equally important is the Regional Comprehensive Economic Partnership (RCEP), composed of 10 members ASEAN + 6 (Japan, China, S. Korea, India, Australia, NZ). The goal is to have the free trade bloc formalized by end of this year.

Perhaps one reason is that while TPP is US-led, RCEP is said to be China-led and given the negative image of China over the territorial disputes in the SCS/WPS, human rights issue, there is less enthusiasm by the public to be so engaged with them.

I am reposting some recent news in the region about RCEP. Thanks to @RCEPNews for these leads.
------------

"“We are facing a lot of opposition from domestic industries, especially from the steel industry, against opening up the sector for competition. Our domestic steel price is $50 (per tonne) more than international prices. How is this acceptable? We are telling the steel industry don’t say the entire steel sector should be out of RCEP. We are asking them to give us a few tariff lines where we can negotiate. But they are adamant. We have to give somewhere to get somewhere else. If India will become too conservative and protective, we will be out of the race. Ultimately, it is going to be a call taken by the Prime Minister’s Office,” a government official said on condition of anonymity.

Sanak Mishra, secretary general and executive head of Indian Steel Association, said he is convinced steel should not be part of negotiations in RCEP or any other future free trade agreement (FTA). “India is a steel non-mature economy. If we open up for steel imports, then we will become an import dependent country for next 30 years. India has capacity and capability to produce steel for its own consumption. We should only import steel which we cannot produce here which is only 7% of our domestic consumption. We will keep up the pressure on the government not to include steel in RCEP negotiations,” he added." July 08, 2015
http://www.livemint.com/Politics/na8OoxdlWdiDBxriOAyp7N/RCEP-faces-opposition-from-local-industry.html

"Speaking at the conference, Vice Director of the Central Institute for Economic Management (CIEM) Vo Tri Thanh highlighted that RCEP is relevant to Vietnam’s outlook on fostering economic integration with comprehensive economic reforms.

Pham Binh An, Director of the WTO Integration Support Centre in Ho Chi Minh City, said the RCEP pact stipulates drastic reductions on trade tariffs, which will have major positive influences on Vietnam as the country is experiencing a trade deficit with some of the regional nations.

Vietnamese enterprises need to map out effective import-export strategies, he underscored, saying RCEP commits to cut down a raft of tariffs, restructuring trade among well-developed countries in the region." July 10, 2015. http://www.vietnambreakingnews.com/.../rcep-agreement.../ 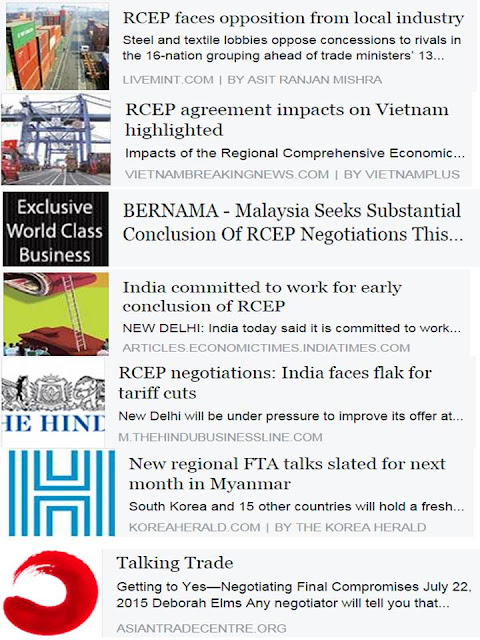 "International Trade and Industry Ministry Secretary-General Tan Sri Dr Rebecca Fatima Sta Maria said a comprehensive closed door meeting, that will gather all 16 countries involved in the RCEP, would be held this Monday.

"The RCEP is an important negotiation for the region. We are trying to see where the bloc is and what we can do to progress this," she told reporters on the sidelines of the ASEAN Senior Economic Official Meeting (SEOM) here Friday." July 10, 2015.
http://www.bernama.com.my/bernama/v8/bu/newsbusiness.php?id=1151711

"She reiterated the importance attached by India to RCEP negotiations and conveyed India's continued commitment to work with other countries to conclude a mutually acceptable RCEP agreement," the Commerce Ministry said in a statement." July 13, 2015. http://articles.economictimes.indiatimes.com/.../64370525...

"India has got “singled out’’ for offering the lowest market openings in goods at the recent ministerial meeting of the 16 countries negotiating a regional comprehensive economic partnership (RCEP) pact. It is under pressure to improve its offers substantially.

New Delhi also conceded to the demand of RCEP members, including the 10-member Asean countries, China, South Korea, Japan, Australia and New Zealand, to agree to a separate group on e-commerce that will hold its meeting early next month, a Government official told BusinessLine.

However, it got itself a breather as the ‘e-commerce’ group is one on cooperation and is not yet a negotiating one. “India need not take any commitment immediately as the committee will have to meet to decide its agenda. It will first start with exchange of information. We have some breathing space,” a government official said." July 16, 2015. http://m.thehindubusinessline.com/.../article7430409.ece

""There is a sense of urgency for a deal among the participating countries as they have set a deadline for negotiations at the end of the year," Deputy Trade Minister Woo Tae-hee told a regular press briefing.

"The countries are making considerable efforts to move their negotiations forward," he added.

Woo, however, noted the countries were still at the stage of setting a guideline or modality for market liberalization under the envisioned free trade pact, which need to be followed by a possibly more strenuous process of drawing up a list of products to be liberalized for each country taking part in the multilateral negotiations." July 21, 2015.
http://www.koreaherald.com/view.php?ud=20150721000646

"RCEP officials are at risk of eating a lot of cheese (or a mountain of dough) on their hypothetical pizza.

The recent ministerial meeting in Malaysia appears to have resulted in a determination that the negotiations will not conclude this year as planned. This is actually very good news, since it provides more time for officials to reach consensus and create higher quality final results.

But the rest of the discussions with RCEP ministers were ominous. For example, officials are trying to figure out how to order one pizza with different toppings on each side. India, in particular, is trying to create market access commitments that vary across the 16 parties of the agreement. South Korea or Singapore might get more liberalization (or pizza toppings) from India than China will receive." -- Dr. Debora Elms, July 22, 2015. http://www.asiantradecentre.org/talkingtrade/

BWorld 2, Benefits of Trade Liberalization for the Philippines, May 16, 2015
BWorld 7, Free Trade vs.Protectionism via Non-Tariff Measures, June 26, 2015
Posted by Bienvenido Oplas Jr at 6:37 AM