Minimal Government Thinkers, Inc. is a partner of two international free market network dealing with property rights protection including intellectual property rights (IPR) -- the Property Rights Alliance (PRA, based in the US) and the Geneva Network (GN, based in UK). PRA is an old, established network and among its important projects is the production of the International Property Rights Index (IPRI) annually. GN is a new network, born only this year and it produces occasional papers and holds some public events/lectures from time to time. PRA is headed by Lorenzo Montanari and GN is headed by Philip Stevens, both are good friends of mine.

GN has produced this week a new paper, 3-pages The TPP, data exclusivity and public spending on medicines. The Trans-Pacific Partnership (TPP) negotiations create a number of conspiracy theories that are, well, unsubstantiated conspiracies. Like if period of regulatory data protection (RDP) aka "data exclusivity" for biologic medicines is increased, then it will increase public spending on new, essential medicines and reduce public access to them and hence, adversely affect public health. 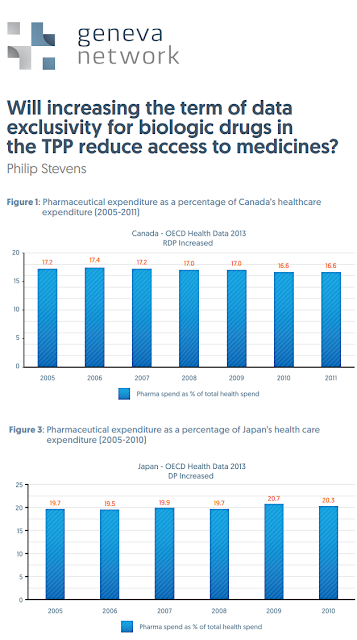 Phil concluded his paper with this observation,


"There could be many explanations for this result, ranging from changes in procurement policies to increases in the number of medicines that whose patent terms have expired. The evidence presented above, however, suggests that those concerned about access to medicines and the financial sustainability of public healthcare systems should focus their attention on policies other than Regulatory Data Protection for medicines."