* This is my article in BusinessWorld Weekender, July 9. 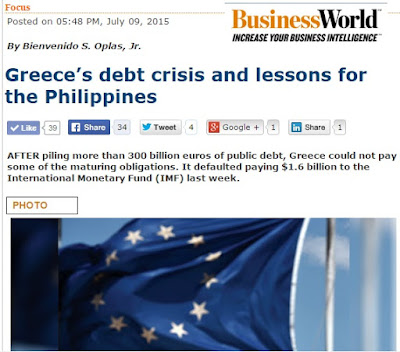 
AFTER piling more than 300 billion euros of public debt, Greece could not pay some of the maturing obligations. It defaulted paying $1.6 billion to the International Monetary Fund (IMF) last week.

How did Greece and its people dig this deep hole of debt?

By living beyond their means, by overspending each year without exception, for decades. It also did not follow many of the conditions of its lenders, especially on spending cuts and revenue increases, a.k.a. “austerity” measures.

Below are the heavily indebted EU economies of the European Union, especially the SPICy-G countries (Spain, Portugal, Ireland, Cyprus, Greece) that have adopted the euro. The United Kingdom is part of the EU but does not adopt the euro and is excluded in this list. Germany is not exactly heavily indebted, but it is the main lender to its highly indebted neighbors, so it is included here for comparison. (See Figure 1)

The turning point for these indebted countries was the housing and properties bubble burst that started in the United States in 2008. By 2009, the contagion affected many EU economies. The SPICy-G countries suffered significant increase in their debt/GDP ratio from 2009-2013. But all of them have somehow stabilized by 2014 by biting the bitter bullet of austerity measures, except Greece.

When majority of Greece voters supported the socialist-leaning Syriza Party headed by Alexis Tsipras in January 2015, they also supported Mr. Tsipras’s agenda to fight austerity measures that were stipulated in previous bailout funds.

Among the factors why Greece’s public finance is heavily compromised is their generous retirement and pension system, which required additional public borrowings. In December 2014, Greek Labor Minister Yiannis Vroutsis reported to the parliament, as quoted by news reports:

A Filipino friend went to Greece a few years ago and stayed for four months. He observed that people had time to rally almost daily, demanding higher salaries but lesser work hours. Their lunch break was from 12 noon until 3-4 pm.

Last Sunday, July 5, the Greek majority voted NO to austerity measures that their country’s leaders earlier agreed upon with creditors. That vote may find resonance in that country’s being the birthplace of democracy. But the Tsipras government and its supporters effectively do not want to pay many of their huge debts, money that were used mainly to pay for the salaries and perks of government personnel and finance various welfare and pension subsidies.

THE PHILIPPINES AND SOUTHEAST ASIAN DEBT

Unlike in the critical 1980s, the Philippines today is much like its neighbors in the ASEAN. They are nowhere near the situation of Greece or the SPICy countries. The level of public indebtedness in ASEAN is just one-half or even one-fourth of those in the SPICy-G. The Philippines and Indonesia, in particular, have relatively low debt/GDP ratio. The denominator, the GDP, is rising faster than the numerator and, hence, the ratio for the Philippines is consistently declining. (See Figure 2) 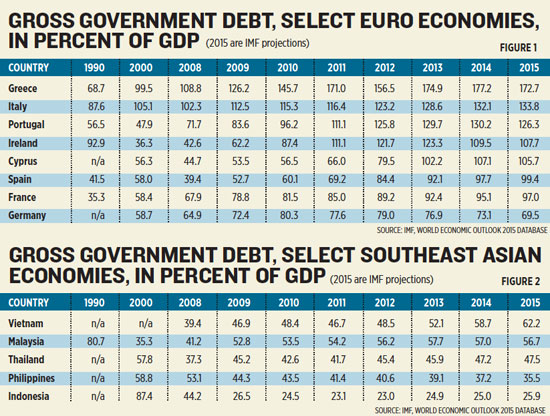 LESSONS FROM THE GREEK FISCAL CRISIS

1. SHORT WORK: Early retirement with pension may be cool but it will punch a big hole in the annual budget, as the number of workers decreases while the number of pensioners increases, requiring additional public borrowings.

2. RULE OF LAW: If you borrow money, pay it. The bigger the debt, the stricter will be the conditions set by creditors. Follow those conditions whenever possible, do not blackmail creditors with emotional cries of “unjust, cruel conditions,” then demand that the terms be changed midway.

3. HUMILITY: If you cannot pay your debt on schedule, humbly ask for reconsideration and debt restructuring. It was you who begged for those loans in the past, not the creditors.

4. SAVINGS: If you can live beyond your means resulting in overspending and borrowings, learn also to live below your means on other years, cut spending and aim to have fiscal surplus and pay back some of those loans.

5. PRIVATIZATION: Other than more taxation and fees, substantial revenues can be realized through privatization of state-owned corporations and banks, wide land holdings, and other assets.

6. ROLE OF GOVERNMENT: Limit it to setting fair rules for all players and become an impartial referee in disputes, enforce the rule of law. Governments should refrain from being businessman-trader and business regulator at the same time. B. Oplas, Jr.