(This is my article last week  in BW Weekender) 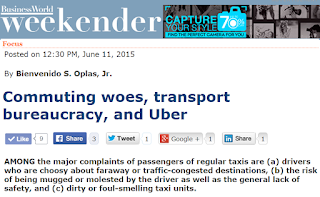 AMONG the major complaints of passengers of regular taxis are (a) drivers who are choosy about faraway or traffic-congested destinations, (b) the risk of being mugged or molested by the driver as well as the general lack of safety, and (c) dirty or foul-smelling taxi units.

Uber, a technology-based system of ride-sharing, was introduced in the United States in 2009 and soon enough adopted in other countries. In February 2014, the company and its services came to Manila. What are the features, advantages, and disadvantages of this mode of transportation?

One, transparency and security -- as passengers themselves would attest to. Both passengers and drivers have accounts with Uber, somehow they know each other before the driver picks up the passenger. The passenger knows beforehand the model and plate number of the vehicle that will pick him/her up.

This disclosure of information should serve to discourage criminality either on the part of the driver or the passenger. There is also the system wherein the driver rates the passenger, among whom those reported to be prone to verbal abuse eventually lose access to the system. So only well-behaved passengers can avail themselves of the system and get a ride.

Uber’s system also serves to ease traffic and enhance mobility. A passenger need not bring his/her car, brave the heavy traffic, and worry about parking. Uber is a ride-sharing scheme wherein the motorist picks up a passenger going in the same direction.

From passenger observations, private-owned cars are generally cleaner than taxis, and their drivers, who are also subject to a rating system, are said to be friendlier. Another now-common compliment about Uber is that no passenger is turned down all because of the remote or traffic-heavy destination.

Yet the same service that encourages passengers to leave their cars at home may also aggravate traffic congestion with its network of vehicles, and this in turn prompts taxi operators keeping up with Uber’s service to expand their fleet. Moreover, cab operators are subject to stringent and costly regulations from which Uber so far has been spared. Also, there’s a premium to passenger safety and convenience, thus the perception that Uber somewhat more expensive compared with a regular taxi.

On May 10, the DoTC enacted a new order on “Promoting Mobility” that aims to modernize and improve transport services to the commuting public. Among the order’s guidelines and accreditation requirements for Uber and other ride-sharing services: passenger personal accident insurance; maximum vehicle age limit of seven years from the date of manufacture; one-year validity of accreditation; registration with the Bureau of Internal Revenue and provision of receipts to passengers; and an accreditation fee of P10,000 and application fee of P510 for the first two cars.

Meanwhile, a technical working group of the House committee on transportation wants these ride-sharing services suspended, amid the still-unresolved legalities over whether such services fall under “colorum” transport, among other concerns such as passenger safety and tax liability.

On the other hand, Uber’s patrons themselves have been critical of the many requirements by the Land Transportation Franchising and Regulatory Board for ride-sharing operations to be validated by transport authorities. But the government should step back from its customary bureaucratism and recognize this development in public transportation as filling in the sorry gaps in this very component of public service.