I am reposting portions of a great piece written by a friend, Jayant Bhandari. Jayant is a Canada-based Indian consultant who constantly travels the world looking for investment opportunities, particularly in the natural resource sector, and advises institutional investors about his finds. I met him about three years ago  when he came to Manila. Jayant also runs a yearly seminar in Vancouver entitled "Capitalism & Morality." 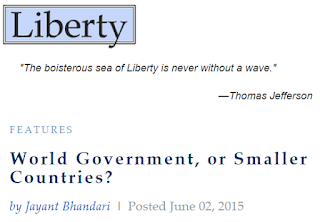 Some believe that we are rapidly moving towards a world government. The European Union was one of the most visible expressions of this motion. NAFTA, ASEAN, and other trading blocks were seen as small moves in the same direction. The UN was the dream of the mushy-headed, those living on intellectual welfare with no real-life experience of how wealth is created.

A world government would be unsustainable if it ever came to pass, for the kind of people who work in governments always take pride at backstabbing one another, as well as their competitors in other governments. People’s lives have changed tremendously, given easy travel and high technology, but the structure of governments has not changed.

The world is becoming increasingly complex, but the institution of the state has remained mostly unchanged, making large governments very brittle….

So far from world government being likely to happen, the future belongs to smaller states. But this will happen after a lot of turmoil.

Most banks comply with US bullying, although the cost of compliance is horrendous for financial institutions around the world. One day a breaking point will come and they will stop. Perhaps an alternative international currency will trigger this….

The bigger states will break

Before the world starts ignoring the diktats of the United States, America will become increasingly heavy-handed. Anything it doesn’t like will be considered "terrorism." For Americans, privacy will cease to exist. This is not based on prophecy, but on the history of how human civilizations have evolved and gone out of existence. The Roman Empire disappeared. So did the English and the French empires.

In other large countries — India, Brazil, France, the UK, etc. — the institution of government will come under huge amounts of stress, as heightened expectations of a populations hugely influenced by the modern-day welfare system can no longer be met. The world is becoming increasingly complex, with new technologies and cheap traveling, but the institution of the state has remained mostly unchanged, making large governments very brittle.

While all conventional religions are tribal in nature, they at least have elements of compassion, honesty, and other virtues. But statism thrives on hatred for other people.

To me the “Arab Spring” was the first visible sign of this. So was the democratic movement in Hong Kong. Behind the facade of higher vision and increased nationalism is indoctrination of a populace that is incapable of critical thinking, the kind of populace that in earlier generations would have stayed out of having an opinion on public policy. They have come to see democracy as a magic wand that delivers whatever one aspires for, merely through the vote. Nationalism is the emotional crutch for their failure to be self-dependent and their lack of self-confidence. None of these fake, irrational values can keep big nation-states glued together when the crunch time comes.

The result will be the possible breakup of many of the larger states. Would the US also break up? The irrational tribal slogan — “we are the biggest and the best” — can keep the US together for only so long. So far from world government being likely to happen, the future belongs to smaller states. But this will happen after a lot of turmoil, ironically made worse by the fact that in general, today’s populace is likely more statist and patriotic than the previous generations.

I have been very impressed with how well Hong Kong and Singapore are organized. In fact, I have become enamored with small countries.

I recently spent two months travelling in Central America, trying to understand its economy and people….

These small states recognize the economic importance of expatriates and mostly let them get on with their lives. Protecting property rights is their core competence. Nicaragua, for example, has become an attractive place for property investment, offering the cheapest options for those who can navigate this emerging country. In terms of expense, Panama is in between Costa Rica and Nicaragua.

Panama offers quality at a reasonable price. It also uses the US dollar, which is not the best way to run a monetary policy, for it is still dependent on a fiat currency, but this ensures that Panamanians cannot run their own printing press. Of course, they have no central bank of their own, and hence no cartel that comes with it.

Why is a place such as this, relatively conflict-free and wth enormous natural resources, not very rich?

Not only Americans and Canadians but also those from Ecuador, Venezuela, and other countries are finding safety in Panama. As a rule of thumb, small countries offer asset protection that big counties don't, for if these small countries stop respecting property rights, expatriates will fly away with their money.

Neither Costa Rica nor Panama has a military. This not only saves what would have been about 5% of the GDP in wastage but it sets a certain way of thinking among the citizenry. War is the health of the state, and statism is the worst religion. While all conventional religions are tribal in nature, they at least have elements of compassion, honesty, and other virtues. But statism thrives on hatred for other people. When you have the military solely for defence, narrowly defined (as is the case with Singapore and Switzerland) or have no military at all (as in Panama and Costa Rica), the social mindset is not about hatred for people who are different.

The repercussions are far-reaching. Less hatred also means fewer social conflicts within such societies, and hence a lack of civil wars within these countries. One must still be cautious about isolated crimes….


When traveling around in Costa Rica and Panama one must wonder — as I did — why a place that has been relatively conflict-free and has enormous natural resources is not a very rich place. Businesses tend to hire expatriates as much as they can. Locals are not known for their work ethic. Why this is the case, I am not sure. But that is why I travel, for it forces me to think about issues that would otherwise not occur to me. It hones my understanding of cultures, politics, and economics. Again, as an individualist, what I care about most is what affects me; and I doubt that the realm of One World Government would stimulate me much.
-----------