Many sectors have been hoodwinked into believing that solar power is "free" and "reliable". At day time, yes, it is free, one does not need a single power plant to produce lights.

Here is the case of renewables in Europe. Solar power's actual power output is on average, only 11.2 percent of its rated or installed capacity. And the cost, solar power is up to 34 times the cost of putting up a natural gas power plant. wow.

Source: Charting the costs and effectiveness of Renewable Energy in Europe,
https://edmhdotme.wordpress.com/2015/01/22/charting-the-effectiveness-of-renewable-energy-in-europe/

Capacity factor of only 11.2 percent of its rated or installed capacity, wow. Meaning a 100 MW solar power plant can produce on average, only 11 MW. Well at night time, output is zero; on cloudy days, output may be 20-30 MW and on cloudless, sunny day, output may be 50 MW and higher. So you get an average capacity factor of 11 percent.

In Germany, the King of wind and solar power installation in the whole planet, here are the numbers. 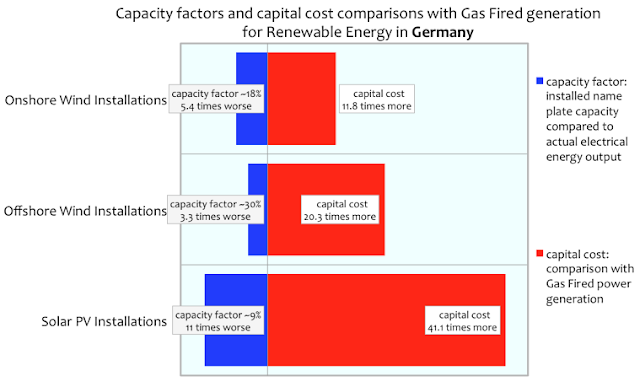 Source: same as above.

Solar power is fine, they expand energy production  in the planet. But giving it huge subsidy and priority in the national grid is not fine because such policy is forcing the rest of energy consumers to pay for expensive electricity. 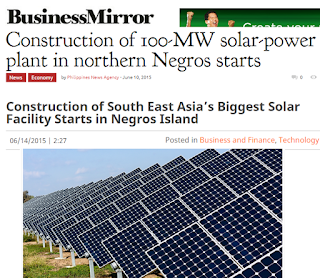 Here is one clear example of energy cronyism, in Cadiz City, Negros Occidental: a 150-MW coal power plant has been scrapped, while a 100-MW solar power has been approved, with huge fanfare.


BACOLOD CITY—Construction of the 100-megawatt (MW) solar-power facility of Equis Funds Group, which is considered the biggest in Southeast Asia, has started at Hacienda Paz, Barangay Tinampaan, Cadiz City in northern Negros Occidental.

Equis Funds, Asia’s largest independent energy and infrastructure private equity fund manager, is expected to complete the project by the end of the year.

Representatives of Equis Funds, led by its Chief Technology Officer Michael Vukelic, met with Gov. Alfredo Marañon Jr. and Cadiz City Mayor Patrick Escalante at the Provincial Capitol on Tuesday. Escalante said the solar-plant project, worth $175 million, is on a 175-hectare land area.


Craig Marsh, Equis Funds Group director, and executives from Soleq, led by its chief technology officer Michael Vukelic, paid a courtesy call on Gov. Alfredo Marañon Jr. at the Capitol yesterday, to brief him on their solar project.

The plan to build a coal-fired power plant in Cadiz City has been scrapped but the construction of a diesel-powered plant is still ongoing, he added.

150 MW coal power has been scrapped? To be replaced by 100 MW of solar which has a potential average output of only 11 MW of more expensive electricity?

Electricity from solar and wind is expensive, about 2x from coal or natural gas because of feed in tariff (FIT) and renewable portfolio standards (RPS) provisions of the RE law of 2008 (RA 9513).

The solar plant and other facilities will occupy 175 hectares. That's a wide area of land. Compare it with Sual coal plant in Pangasinan, 1,218 MW occupying only 280 hectares (power plant + other facilities + ash disposal area).  Source, http://www.teamenergy.ph/about01_sual.php

Coal, natural gas, big hydro, geothermal, are "dispatchable" energy sources. Meaning a power plant can dispatch based on power demand. Solar and wind are "non-dispatchable" based on demand because they are dependent on the weather and time of the day. When the wind does not blow, when the Sun does not shine, a 100 MW solar and 500 MW wind will have great, combined output of zero. They are not useful for baseload (always "on" 24/7) electricity production, yet are expensive.