Fiscal Irresponsibility 29, On the so-called DBM "Underspending" in 2014 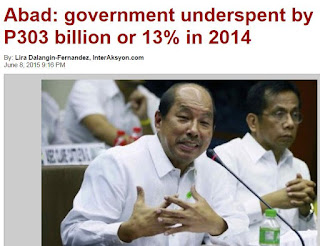 Abad attributed the sluggish spending mainly to the "structural weaknesses within national government agencies and government owned-or-controlled corporations (GOCCS), (42 percent); peculiar problems of small agencies (30 percent); savings generated from lower interest payments and net lending (14 percent); others reasons beyond the control of the agencies (12 percent); refocusing of efforts to Yolanda rehabilitation and recovery (1 percent); and, unutilized funds due to the Supreme Court decision on the Priority Development Assistance Fund and the Disbursement Acceleration program (DAP), (1 percent).

No administration in the country since Marcos (then Cory, FV Ramos, Erap, Gloria, PNoy) knows how to "underspend", to have fiscal surplus during period of no crisis and pay previous debts incurred during crisis or financial turmoil years. Each year, government over-spends, expenditures > revenues, always, resulting in annual budget deficit and annual borrowings. Here is the annual budget deficit, 2000-2014. Average around P180 B a year. 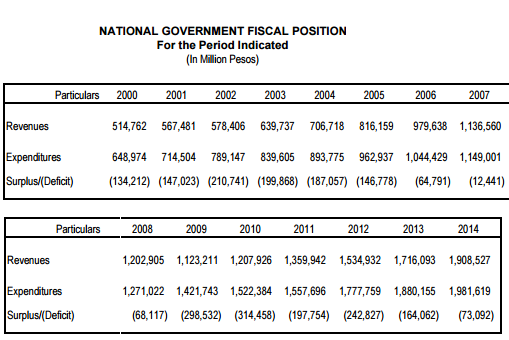 source: http://www.treasury.gov.ph/.../2015/03/yr_cor_fiscal.pdf
PH public or government debt stock keeps rising by an average of P192 B a year from 2004-2014, with or without a crisis. Meaning the PH government, regardless of administrations, just keeps the spend-spend-spend, borrow-borrow-borrow policy.

and DBM "do not want to invest in more health human resource in the face of a growing population. The primary care coaltion is lobbying for more Health human resource, with decent and attractive compensation, and the government answers with a small govt paradigm, cutbacks and contractualization disguised as "rationalization ".imagine what we could have done with P303 billion in advancing universal health care."

Hmmm, "a small govt paradigm, cutbacks and contractualization", he could be referring to Hong Kong. The PH is definitely among the big government models. Combine the cost of national govt + local govt + government corporations (GOCCs, like SSS, GSIS, PhilHealth, PagIBIG) + cost of compliance of various regulations, the cost is big.

Besides, P192 billion a year net increase in public debt stock with or without a crisis is not enough? How much do they want, P300 B year, P500 B a year, increases in public debt?

The "underspending" of P303 billion in 2014 was not directly used to pay our public debt, but rather, it represented money that should have been borrowed and the borrowing by that amount did not materialize.

It is understandable that the health sector will lobby to use that "underspent" P303 billion for more  health spending, like hiring more health human resource as "we don't even have 1 midwife or nurse per barangay."

nnual over-spending, living beyond its means, endless borrowings, is a virtue so long as the money goes to their favorite sector/s.

Consider this: A person who earns P100k a month but spends P110k a month, with or without health emergencies and borrows P10K a month on average will be called "mayabang", "maluho", "magarbo", "hindi marunong magtipid", "palautang", other unkind adjectives.

But when a government does the same, it is ok, it is fine, it is good governance. There is double standard and double talk here. In this example, that irresponsible individual can finance his endless borrowings by selling some of his assets and properties, or resort to stealing from other people, then pay his debts. An irresponsible government can finance its endless borrowings also through large-scale privatization of its assets and corporations, or resort also to stealing -- from the pockets of future taxpayers. Whether they steal from current or future people, it is a criminal act.

In addition, it has barangay health centers + clinic within city hall + private hospitals giving subsidized treatment to indigent residents of the city.

Is there an existing study/ies showing that the residents of Manila City are the healthiest people in the PH? I doubt it, but in case there is one, I want to see that paper.
------------