I do not want to do serious political analysis of the coming May 2016 Presidential, Senatorial and local elections in the Philippines for several reasons. First, my hands are full  with other papers to write and I often miss deadlines. Second, there is no single free market-leaning national candidate or political party. And third, there are so many analysts of this subject around, it is entertaining to read them, from the sensical ones to the absurd.

So I resort to reposting the ideas of some friends whom I think make useful analysis. Below, some random thoughts posted by a friend way back from UP Diliman in the 80s, Bernard Ong, in his fb wall. Reposting these with his permission.
----------

June 16:
Serge Osmena is the premier campaign strategist of the Philippines. Local version of Karl Rove or David Axelrod. He saved the Pnoy candidacy in 2010. Villar was polling well vs Pnoy, until Serge took over the campaign management & messaging.

Here's what he has to say for 2016: Grace Poe should run as an independent. She can win w/o a party. Like Miriam or Roco before, plus the FPJ magic. Poe should drop Chiz. He will be a baggage to Poe for people who don't like him.

Exactly my thoughts. The added bonus is she can govern w/o political debts afterward. Our current party system is a joke - local parties are mainly a mix between personality cult, marketplace for exchanging political favors, and exclusive club for rich families.

Law on premature campaigning is flawed. It only covers acts after one files his candidacy. Any campaigning before that is allowed. It should be amended to cover retroactive acts by eventual candidates. Meanwhile we should not vote those who use technicalities to go around the spirit of the law. Like this thief & liar.
----------

Biggest gainers in lastest survey: Poe & Duterte. Biggest losers: Binay & Others. Shortlist seems to be Poe, Duterte, Binay, Roxas (unless he drops out). Erap only comes in if Binay can't run. Otherwise, he "endorses" Binay but his followers vote FPJ/Poe. 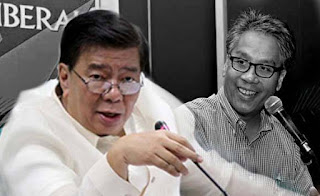 Drilon said "No party convention needed. Mar is the man." Good. I'd like Mar to run for President. It will cure his itch & redistribute some of that fabled Roxas-Araneta-Ayala wealth.

More important, it will keep Grace Poe free of Liberal Party baggage. Beyond May 2016, those responsible for PDAF, DAP & Mamasapano should be held accountable. Without political debts to worry about.

"A P-Noy endorsement of Roxas is clearly a secret vote for Binay. Roxas is one weak challenger to Binay and it is doubtful public sentiment will drastically change." 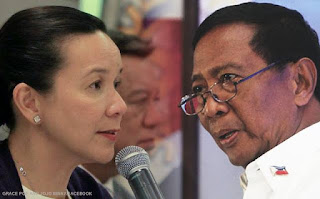 Binay's preemptive strikes (residency, citizenship) & half-baked apologies backfired big time. It firmed up Poe's resolve. And changed the storyline from Binay-vs-Others (where he had a comfortable lead) to Binay-vs-Poe. Or more accurately Looter-vs-Orphan. Unwinnable for him without Smartmatic intervention.

In effect, Binay annointed Poe to be the anti-Binay alternative. Drove most of the "Anybody But Binay" millions into one candidate. Under the spotlight, Poe parried the attacks skillfully. And now we have Poe-vs-the-Rest. Salamat Toby Tiangco!

Personally, I wish that Sen. Grace Poe will run for President. Her being a "newbie" compared to Binay, Roxas, Duterte, Estrada, etc. is for me, an advantage. It means less political baggage and old compromises. When a candidate is financially- and politically-indebted to certain economic interests, it  is hard to decline their political and business "requests." Thus, it is easier for that "newbie" to further advance trade and investment liberalization in the country than candidates who were long indebted or engaged to local monopolists, duopolists and oligopolists.
--------