The ASEAN Economic Community (AEC) will materialize in just six months, at end-December 2015. Many people both within and outside the region are excited about this common market project, composed of some 630 million people. Free movement of people and commodities, free mobility of goods and services within the 10 member-countries. That is economic freedom.

But not full mobility yet, there are still pockets of protectionism especially in services, in almost all member countries. But the trend is towards gradual phase out of those non-tariff barriers (NTBs) in  goods and protectionism in services. 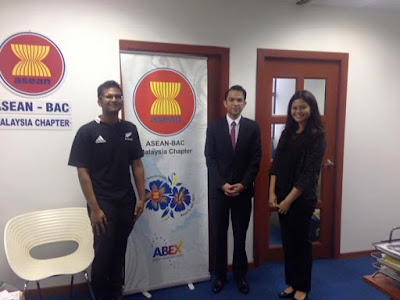 In its facebook page, SEANET reported that the discussion focused on the various challenges and prospects that ASEAN and regional small and medium enterprises (SME's) face, and the necessary steps that must be taken to ensure that economic integration is equitable and sustainable in the long run.

On a related note, our ally and fellow free market think tank based in Kuala Lumpur, the Institute for Democracy and Economic Affairs (IDEAS), has partnered with the global publishing and consultancy firm Oxford Business Group (OBG). The two think tanks will produce a report about Malaysia and the ASEAN economic integration.

IDEAS is the "mother entity" of SEANET. It is also a member of the Economic Freedom Network (EFN) Asia. Photo below, IDEAS CEO Wan Saiful Wan Jan and OBG’s Regional Manager for Asia Lauren Denny. 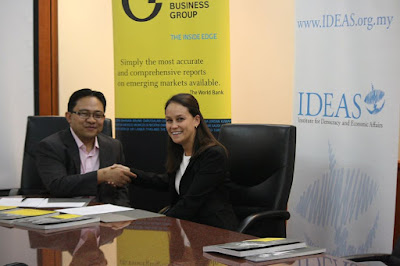 The Report: Malaysia 2016 will provide detailed analysis of what the launch of the ASEAN Economic Community at the end of 2015 signals for both the regional and global economy. The publication will chart ASEAN’s drive to ensure people and their needs remain the top priority in the nations’ efforts to promote regional cooperation and solidarity.

Other issues set for coverage include ASEAN’s push to boost the part played by small and medium-sized enterprises (SMEs) in regional economic development and its efforts to promote more public-private sector partnerships (PPPs).

In other analysis, The Report: Malaysia 2016 will explore the achievements of the 10th Malaysia Plan, as well as the launch and goals of the new 11th Malaysia Plan which will lead the country to Developed Nation status by 2020.The publication will also shine the spotlight on the Malaysian states of Sabah and Penang, where there is evidence of significant economic potential; as well as the opportunities for foreign direct investment (FDI) emerging across many of the sectors of the country’s economy.

The Institute for Democracy and Economic Affairs (IDEAS) has signed a Memorandum of Understanding (MOU) on research with OBG for its forthcoming report on the country’s economy. Under the first-time MOU, OBG will work with the leading think-tank, which promotes market-based solutions to public policy challenges, to compile and produce The Report: Malaysia 2016.

Wan Saiful Wan Jan, Founding Chief Executive of IDEAS said he is excited to contribute to The Report especially this year as IDEAS has just started their project on ASEAN.

"This is an exciting time for Malaysia and for the region. The birth of the ASEAN Community and the ongoing negotiations around the TPP hold huge potential for growth in this region and if done correctly Malaysia will certainly benefit from them. The government too has introduced some important structural changes in our economy which shows their commitment to improve the investment climate. My team has been looking into these issues and we are very keen help OBG capture these important developments in The Report."

OBG’s Regional Manager for Asia Lauren Denny said she was delighted that the Group’s team in Malaysia would benefit from IDEAS’ local knowledge in what marks its ten-year anniversary of analysing the country’s economy. 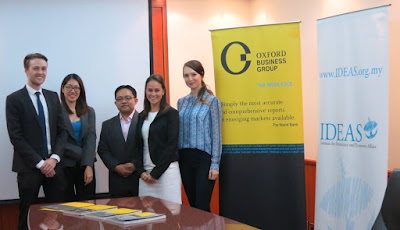 “Oxford Business Group has long recognised the importance of working closely with local partners who bring on-the-ground insight and expertise to the table,” she said. “The Institute for Democracy and Economic Affairs and Oxford Business Ground share plenty of common ground when it comes to areas of research, especially in the fields of economics and education. I am thrilled that our team will benefit from the institute’s contribution to our forthcoming report, which we’re sure will be a valuable tool for investors.”