CSOs and State 20, Gawad Kalinga and Housing for the Poor

Below are some thoughts from Benito Claudio, a friend of my former professor in UP Diliman in the 80s, Dr. Doy Romero. This was posted last week by Benito and sir Doy in fb and  was read by many people. I like this very successful civil society initiative, Gawad Kalinga (GK). It is very successful that it is being replicated in other Asian countries, and there are GK offices in  the  US, Europe, other countries. Reposting this with my comments below. The images I got from the web and adding them here. 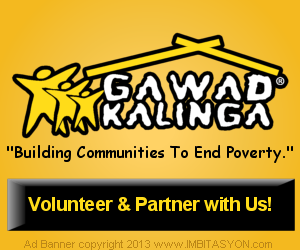 Doy I speak from my personal participation in three project sites of GK where about 400 houses were built in two sites and about 80 houses and a school were re roofed after a super typhoon in another site. I led a team of volunteers twice to re roof about 80 houses and rebuild a school and provide learning materials and two teachers for a year.

I volunteered in the other two sites. What was so noticeable in the site where we re roofed the houses and rebuilt the school was a working community with sense of involvement and belongingness. The project was well planned with common areas for school, livelihood and open spaces. In effect GK built a community not just houses.

This did not happen by chance but by meticulous planning and highly committed implementation by silent and unsung volunteers. Gk has teams of social workers, construction engineers, educators, livelihood trainors and site managers who oversee the community after the houses were built.
"House owners who were obviously poor in material things donated their service as their equity and I believe this provided a basis for ownership and pride. Livelihood volunteers provided the know how to create common plots for vegetables for the community and other entrepreneurial undertakings. Social workers ensure that community members gel.

In short what I am describing is the building of a wholistic communities where the members can live with dignity. It is so inspiring that my fellow employees grouped themselves to pool resources for a house they helped build. Others spent their vacation leaves to individually volunteer.

But all of these pale in comparison to the commitment of the Meloto family. I suggest the commentators start their research there. A foreign government was so impressed with GK that it provided an office in their country so that GK's effort can go international. . . I believe rightly so.
"The poor will always be with us but it was heart breaking to see a widow covering her young famished children with plastic sheathing against a pouring rain under a roofless house. And I wondered why so few people are lifting their fingers to help. 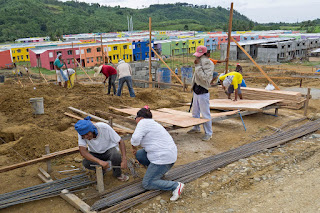 the GK communities we visited appeared better organized than many of the non-GK resettlements we visited later. We did not see the lamentable condition of government resettled informal settlers that we documented in our study. In the end, we who observe from a distance really will not matter. The poor who need shelter will get them from GK and not from any other provider, if GK it is that is able to galvanize the energy and passion to get them done.

thanked sir Doy for those notes  and observations. GK is a clear example of civil society role at the max, government role at the minimum. People and beneficiaries behave differently if the project implementer is government, national or local. They tend to downshift to dependence, complacency and feeling of entitlement. “Money is from taxes and fees, those politicians are courting our votes, so we sit back and wait.” And just wait for the government housing to be turned over to them by some political bigwigs, with glare and flare of  tv cameras and other media coverage.

In a GK and civil society project, money is from donation, not from coercion. Beneficiaries behave differently. “Those talents and engineers are volunteers, not political appointees and hired paid for by taxes. If we do not help here, those volunteers will pack away and find other beneficiaries who are willing to help themselves and the project.”

GK, Rotary Homes, Books for the Barrios, etc. These initiatives build not only wholistic communities but also mature, self-reliant and non-corrupt, non-entitlement-minded people, especially the poor.

I have a friend from UP, now based in California. He regularly donates to GK and GK updates him and other donors of new projects, how funds are used, etc. He is satisfied so he keeps giving. But he told me that the moment he sees or reads and confirms wasteful use of funds or other shenanigans, his donation will abruptly end.

This threat of fund/donations discontinuity, plus any criminal charges to be filed, is the best regulator of civil society organizations like GK. It’s not the SEC or Congress or BIR that forces transparency and accountability, but the private donors who give in cash or in kind.

One implication here, it is possible to abolish some government housing agencies like the National Housing Authority, in exchange for some tax cuts somewhere. The poor do not care much who can give them free or subsidized, nice housing, whether civil society or government. If dynamic civil society like GK, Rotary Homes, etc. can do the job at little or zero cost to taxpayers, government should step back from more housing bureaucracies and more taxation.

* Digression 1: About relocation of M.Manila squatters to secluded municipalities in Bulacan, Rizal, Cavite and Laguna. A better option is high rise, vertical housing for the informal settlers within M.Manila. Beneficiaries will pay of course, not free, no subsidy. Otherwise, there will be one million more migrants from other provinces seeking free condo in MM. Beneficiaries can pay because they can retain their current jobs and income, the cost of transportation to work is lower, and they will have peace of mind of having ownership of the place where they live. Those who are too poor to pay even small condo units should not begrudge being  brought to  far away resettlement areas. They can have highly subsidized housing there but they will suffer temporary economic dislocation.

The cost of condo units can be reduced via drastic reduction of various taxes, fees, permits imposed by national and local governments. Real property tax (RPT) alone by LGUs can be very high, and that contributes to high cost of condo housing.

* Digression 2, on "We should not give up on encouraging government agencies to improve their performance."

True, but only for agencies that are directly related to rule of law, protection of private property and citizens life, and protection of individual liberty. That means the justice system, the courts, the police, correctional, etc. If there is government failure in this very basic function of government, we can expect government failure in many other agencies that are not even related to rule of law implementation. Like housing, education, healthcare, pension, credit, etc. And that is precisely what's happening now. Government has expanded too much, the taxes, interventions and bureaucracies have expanded but the basic function of protecting our lives and private properties, there is government failure. So peace and order has been privatized, private security guards protecting our villages, shops, malls, schools, offices, airports, seaports, bus terminals, There is widespread and large scale distrust of government peace & order agencies.