The South East Asia Network for Development  (SEANET) website, http://seanetwork.asia/, has been expanded. It now has more pages, more contents. Check it guys, thanks.

Yesterday, I attended this lecture at the Philippine Institute for Development Studies (PIDS) here in Makati. It's a USAID-funded study aimed to assess the Philippine government’s commitments on the financial services sector under the ASEAN Framework Agreement on Services (AFAS), the status of its compliance, and the country’s financial services sector’s competitiveness in comparison to other ASEAN Member States (AMSs). 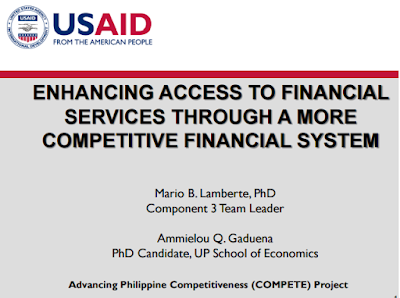 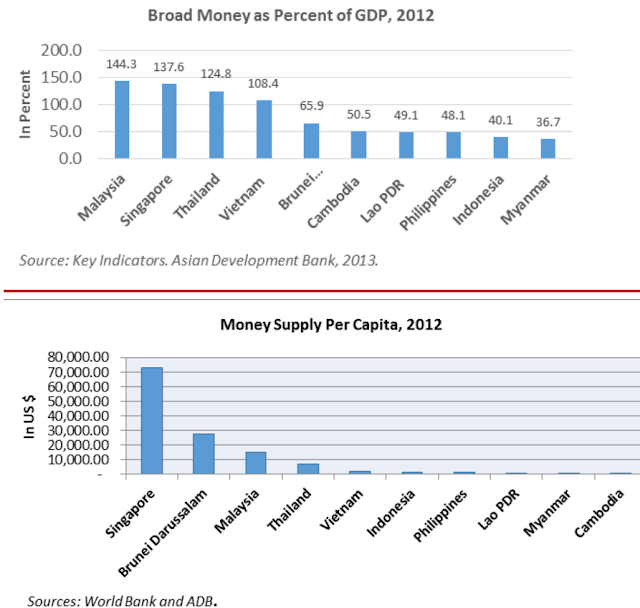 In non-life insurance market, the Philippines’ was the smallest both in terms of assets and 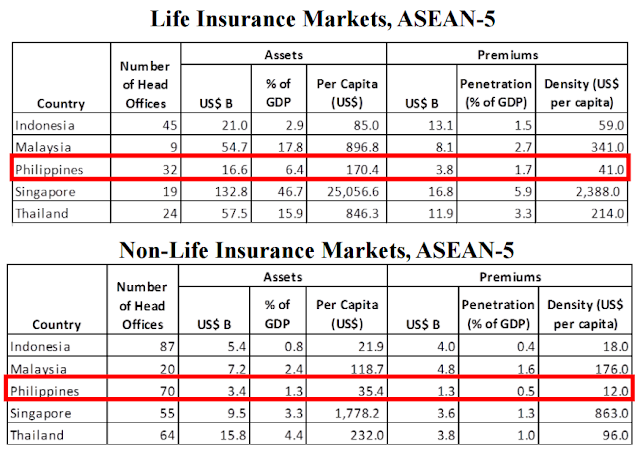 
In market capitalization, Malaysia and Singapore stood out as consistent leaders in the region despite a sharp decline in their capitalization in 2008. The relatively few firms listed in the Philippine Stock Exchange, accompanied by a relatively high market capitalization, suggest that only a few large firms carry the ball compared with Thailand. And this also suggests that a few stocks tend to be highly priced, making the stock market greatly vulnerable to sudden withdrawal by investors as happened in the last global financial crisis. 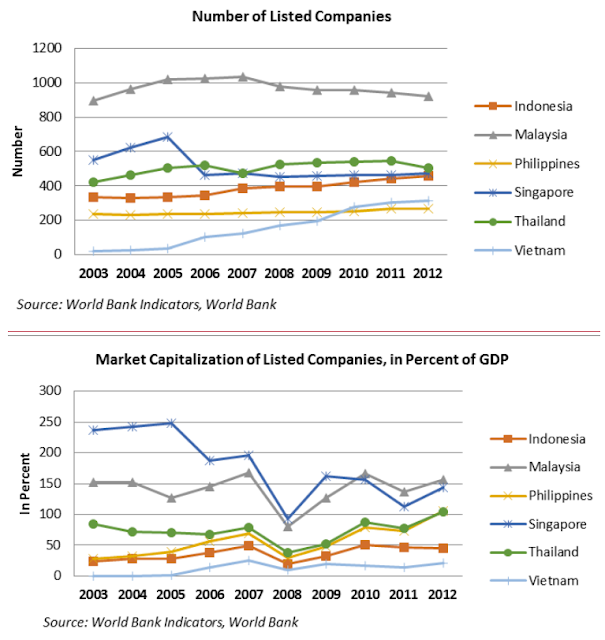 In capital account openness index De Jure, this index takes on higher values the more open the country is to cross-border capital transactions. Singapore has the highest degree of capital openness among AMSs.  The Philippines has the same degree of restrictiveness as Thailand, Malaysia and Lao PDR, all of which are more restrictive compared with Vietnam’s and Indonesia’s.

In De Facto openness index, second chart below, the higher the ratio of total stock of foreign assets and liabilities to GDP indicates that the country concerned has a de facto higher degree of capital account openness. Singapore is still the most open, the Philippines is less financially integrated with the rest of the world compared with other AMSs. This is possibly due to, among others, the size of the markets for financial instruments in the country and investment climate. 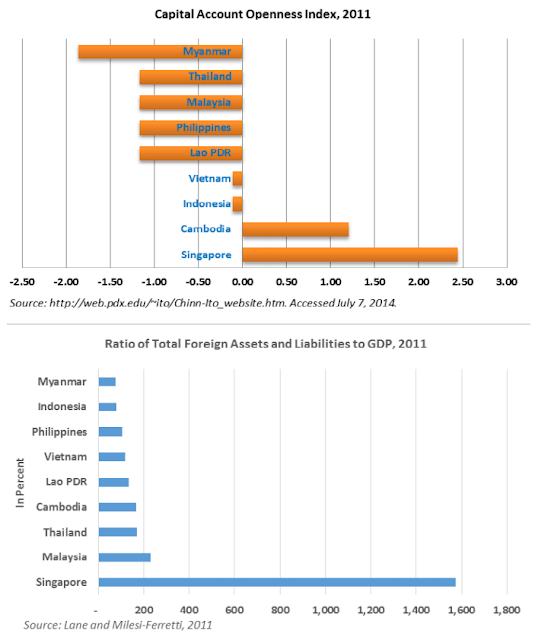 In financial regulaton, AFAS commitments, the Philippines’ recent equity cap reform for banks is not yet reflected in the AFAS commitments. AMSs apply different degrees of restrictiveness on the equity participation of foreign players. Market entry can be further limited by imposing the requirement that the majority of the board members be nationals.

hares of foreign banks in total deposits is less than 10% in Indonesia, Lao PDR, the Philippines and Thailand. Foreign banks seem to focus more on wholesale banking, probably due to the limited number of branches in countries where they operate. ASEAN banks still have much room to expand their presence in the Philippines in the near term, while it is a big challenge for Philippine banks to penetrate the banking markets in other AMSs. 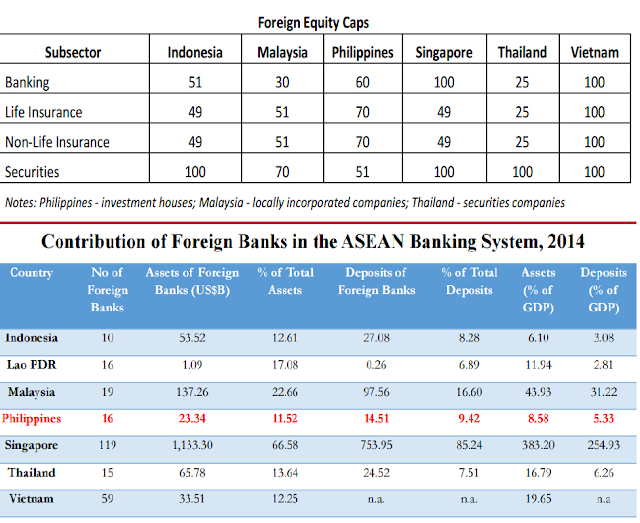 On the competitiveness of ASEAN narkets and financial institutions, descriptive analysis, banking subsector. 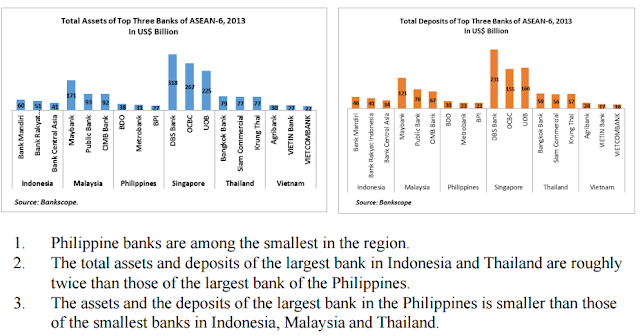 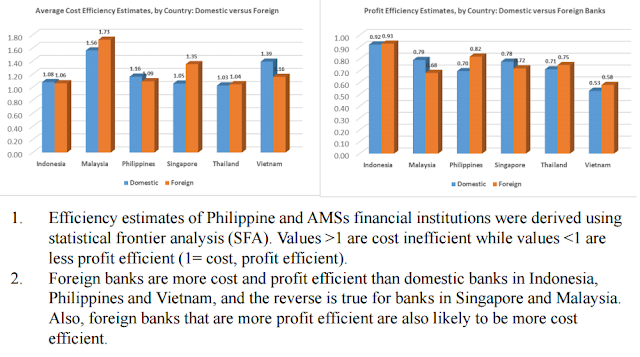 The paper's recommendations as discussed by Dr. Lamberte.

1. Unlock the power of the banking system through the reduction of intermediation taxes (reserve ratio) and unwinding the special deposit accounts (SDA).

2. Continue the liberalization of the financial system, particularly by encouraging more foreign players to enter the domestic financial market.

3. Combine liberalization with a strong merger and consolidation policy. Having subsidiaries will allow foreign partners to play a bigger role in the domestic financial system than if confined to being branches of their head offices.


4. Introduce measures to support SMEs to scale up their operations. Raise competitiveness by allowing more branches on the basis of capital and SME loan portfolio.

Durng the open forum, I noted that the recommendations did not expound much on how the various government regulatory agencies should step back from costly regulations -- Bangko Sentral ng Pilipinas (BSP), SEC and the Bureau of Internal Revenue (BIR) especially. Their regulate-regulate-regulate, tax-tax-tax policies often tie the hands of players, existing and potential players, from engaging in more dynamic competition that benefit the borrowers and the public.

Dr. Lamberte replied that this is the latest paper in a series of studies they have done on the financial sector of the Philippines. Previous papers have touched on those regulatory agencies.

Well, this is a USAID-funded paper and I don't expect that it will take a more radical, less-government role in the financial sector perspective, as the US government itself (SEC, Fed, etc.) keeps piling up plentier and thicker set of regulations yearly. Nonetheless, the data presented by the paper are informative and useful.
----------