* This is my article in BusinessWorld Weekender yesterday.
------ 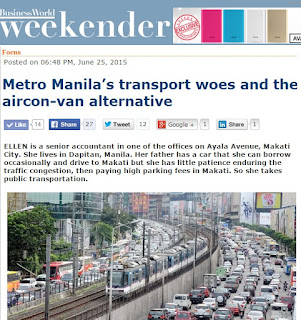 ELLEN is a senior accountant in one of the offices on Ayala Avenue, Makati City. She lives in Dapitan, Manila. Her father has a car that she can borrow occasionally and drive to Makati but she has little patience enduring the traffic congestion, then paying high parking fees in Makati. So she takes public transportation.

If she takes the regular transportation route to Ayala, that means three rides: jeep from Dapitan to LRT Tayuman Station, then LRT to Buendia Station, then aircon bus to Ayala. Total fare would be P35 but travel time will be between 1.5 and 2 hours one way due to the traffic and the inconvenience of walking and queuing to ride the train then the bus.

There is an alternative to multiple and inconvenient rides, the air-con vans. Only one ride from Dapitan to Makati, travel time is one hour or less, fare is P60 for the legal, franchised vans up to Ayala, and P45 for the non-franchised “colorum” vans that stop only at Makati Central Post Office, at the Buendia-Ayala intersection. To save money, she takes the “colorum” van, gets off at Makati Post Office, then walks two blocks to her office.

While the colorum van drivers can somehow deal with the “yellow boys,” officers of the Makati Public Safety Authority (MAPSA), they will have difficulty dealing with another bureaucracy, the “blue boys” of the Makati Parking Authority (MAPA) keeping watch on Ayala Avenue. These officers are often stricter and more inclined, shall we just say, to slapping penalties on both public and private vehicles.

SERIAL HARASSMENT
Being robbed in an air-con van by a fellow passenger is a possibility, of course, but that risk is minimal, compared with the risk of being robbed in a jeepney or on the streets, as one commutes from one ride to the next. It is also inconvenient, obviously, to be out in the streets when it is raining and the streets are flooded.

Queuing at Dapitan can be long, because of the many residents who commute to Makati where they work, and the number of aircon vans is not enough. Normally, Ellen would be in a queue for 30 to 45 minutes until a new, empty van arrives, but she prefers the relative convenience of taking only one ride in an air-con van.

Therefore, with or without a regular franchise from the LTFRB, those vans provide real public service to regular passengers like Ellen. She feels that her energy and work productivity are higher if she takes the van than if she goes through the three-ride system or drives a car.

Government officials have yet to acknowledge this view, going by the serial harassment of drivers of “colorum” vans -- who can avoid the harassment and penalties if they bribe the officers, but this “cost” is passed on to the passengers, naturally.

Ellen has noticed that a number of these colorum drivers are off-duty policemen or their siblings, even officers at the usual government offices, or barangay chairmen. She believes roughly one-third of these drivers belong to those categories. Asked how she knows this, she says these drivers show their IDs, and they have these unique hand signals that traffic officers recognize to spare these drivers from their usual harassment. This is what happens when you have an observant passenger on board, as opposed to a commuter who is lost in his headset or social media.

HARRIED EMPLOYEES
Makati’s Central Business District (CBD) is a premier area for the Philippine economy. Business groups surely recognize this distinction as sustained through the decades by their harried employees. Data from the city government’s website show that as of 2012, there are 472 banks, 3,279 insurance and other finance-related institutions, and 48 shopping malls in Makati. Data as of 2013 show that there are 41 PEZA-registered IT buildings, 47 embassies, 40 consulates, and 20 international organizations like the UN and its various offices located in the city.

These banks, hotels, shops, restaurants, malls, and other establishments employ roughly a few hundred thousands of people. Those employees, from the clerical to the managerial levels, need convenient transportation to be able to arrive at their offices promptly and render efficient work. Otherwise, employees beyond the frontline services may be spared the trouble of commuting to work, but many employers are still not open-minded enough to accommodate flexible time or work from home -- options that should ease Metro Manila traffic considerably.

This daily scenario is common everywhere in the National Capital Region, which, in the given year of 2013, contributed P4.29 trillion or 37.2% of P11.55 trillion in GDP. In the services sector in particular, 2013’s national output at current prices was P6.66 trillion, of which P3.49 trillion or 52.7% was contributed by the NCR.

The NCR’s registered population in 2013 was 12.5 million or only 12.8 percent of the total Philippine population of 98.2 million that year. But NCR’s weekday population can soar up to 15 million, as residents, including university students, from the neighboring big provinces of Rizal, Cavite, Laguna, Bulacan, and Pampanga would troop to the NCR to do various businesses.

The development of an integrated and efficient public transport system, as existing in developed economies in Asia and Europe, is the best long-term solution to Metro Manila’s traffic woes. That dream has been articulated for decades, until the gap in public transportation is now being filled by private initiative, to the chagrin of government.

The absence of an efficient and integrated public transport system in Metro Manila can be considered as due both to market failure and government failure. The appearance of air-con vans and other ride-sharing schemes like Uber is a market solution to such previous market failure. Government should not over-bureaucratize and over-tax these transport innovations. By stepping back from too much regulation and taxation, government effectively renders public service.

The services of air-con vans that provide workers and employees with convenient and direct public transportation, similar to school buses that transport students from their homes to school, are the next best thing for people who don’t or would rather not drive and brave the traffic. This is public service, providing an efficient, fast, economical, and safe car pooling system.

But when government agencies and their officers make the franchising system of air-con vans very costly and bureaucratic, many operators skip the franchise system and become “colorum” operators. To avoid the harsh penalties and regular harassment, they must bribe traffic enforcers, and this further compounds the culture of corruption in government. -- Bienvenido S. Oplas, Jr.
----------