* This is my guest article for suarakebebasan.org, a new website for freedom created by some Indonesian friends.
--------- 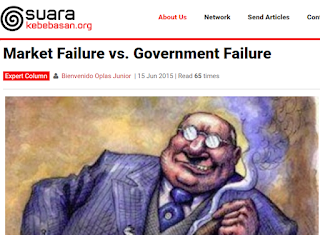 The main reason  why governments (local, national, regional/multilateral) around  the  world keep expanding is because they want to correct and address “market failure”, generally defined as the failure of the market players – firms and households – to supply certain goods and services at prices and  quantity that the public needs and demands.

While this is a generally accepted justification for government intervention, there is also  caution that “market failure” is only a necessary but not sufficient condition for such  intervention. There are two reasons for this.

One, market failure attracts market solutions (not government intervention) and such solutions may not be available today but will be available tomorrow. Good examples are mobile phones. Before, many poor people wanted to have their own phones but could not afford one. Today, prices of this commodity are affordable to the poor, including some of those cute, touch screen and  wifi-ready phones.

Two, it is highly probable that government will only exacerbate the problem and replace market failure with government failure. Good example is healthcare. There is widespread belief that governments should provide free or highly-subsidized healthcare to the poor, but systems are either too bureaucratic, or fast but wasteful and subject to corruption and robbery. And public dissatisfaction with government healthcare remains very high.

In economic theory, the two sources of market failure are identified. First,"public goods" character of a commodity or service. Once it is provided, it is difficult or impossible to exclude non-paying people from enjoying and free-riding the benefits of such good or service; or the cost of excluding the free-riders is high. Examples are national defense, traffic lights, peace and order and justice administration.

With modern technology and management systems, various market solutions have been invented to deal with such perceived market failures. Examples are private villages, townships and industrial and economic zones. Almost everything that governments would normally provide are provided by the private sector there: roads and drainage, security, traffic lights, street lights, garbage collection, public parks, even schools and mini-hospitals. Thus, the “public goods” character of those services is not absolute. Their provision can be done entirely by the private sector, various market players and civil  society organizations.

The externalities aspect of those goods and services can also be internalized. Meaning the private sector players can internalize and absorb the full cost of providing such services, no government taxes and  fees are needed to finance them, partly of fully. These private villages and  ecozones have their  own systems of  internal revenue mobilization and local spending.

After identifying one "market failure" after another, governments began intervening in many sectors and sub-sectors of society. And the first source of failure is created: many bureaucracies. Government should be in healthcare, education, housing, roads, ports, credit, irrigation, trains, media, and so on. And many of those bureaucracies at the national government level are replicated at the state or provincial, city/municipality and barangay/village levels. Duplication, multiplication or missing of functions create wastes and distortions in society, not to  mention big opportunity for corruption in various levels of government.

A second source of failure has to be invented: more taxes, fees, fines, penalties, mandatory contributions, to finance the huge and  expansive bureaucracies. If one will check the World Bank’s “Doing Business” annual reports, as well as Price Waterhouse Coopers (PWC) “Paying Taxes” annual reports, one will see big number of taxes and fees, national and  local, that an average private enterprise will have to pay. Not included there are the costs of getting auditing, business compliance and law firms to help them understand and  comply with new and sometimes  overlapping requirements, permits and  fees to pay.

Since government administrators and officials are spending not their own money, the tendency and temptation to over-spend, to live beyond their means, is high. And huge public debts were invented. Almost all countries in the world now have public debts. While some have a debt/GDP ratio of only 20 percent or lower, many governments have debt/GDP ratio of 50, 80, 100, 200 percent or more.

The litany of reports and citizen complaints of government corruption, plunder and other forms of waste and crimes especially developing countries confirm that government failure is often worse than the market failure that such intervention wanted to correct.

It is now difficult to identify any sector or industry and sub-industries in our social and economic lives where there is no government intervention and registration required. In many cities and countries, ven repairing or remodeling one’s office or condo requires city hall permit or license. And to reoccupy said office after a remodeling would require another city hall permit.

Those in the "informal" or "underground" economy do not exactly escape 100 percent of  those government permits and licenses. It is more like out of 10 or 20 business registrations, taxes and fees required by government, they only managed to escape perhaps 50-70 percent of them.

Very often, government failure is addressed or “corrected” by another set of government intervention. Like creating a new anti-corruption office or task force, creating new internal regulations and mechanisms to check and double check procedures and release of funds. These moves are essentially pouring more public money to determine how much public money have been stolen and wasted already.

The new key word being sold to the public to accept new interventions is "good governance", more transparency and accountability of public institutions and government officials and personnel. Implied in this formulation of course is the retention of a big, expansive, and interventionist bureaucracy; only to expect them to behave more transparently.

An option to go "back to the market" and "less government intervention" is far out among the minds and demands of many groups and people, even from those very vocal sectors and individuals that regularly note government failure, like those in media, the academe, NGOs and civil society groups.

In the book, "Government Failure: A Primer in Public Choice" written by Tullock, Seldon and Brady (2002, published by Cato Institute, Washington DC), Chapter 4 is entitled “The cost of rent-seeking”. Examples of rent-seeking are (a) trade protectionism, where the protected local industry benefits but the local consumers are worse off; (b) private monopolies, and (c) direct income transfers by government where A is taxed and B receives the money.

Trade protectionism is trade dictatorship. The domestic consumers are being told that they can only buy or import from this country but not from other countries; or they can buy from anywhere but only for xx tons volume; or they can buy anywhere at any amount but at 10 percent, or 100 or 500 percent more expensive price because of import tariff and  other national and local taxes and fees.

Private monopolies via government franchising is enterprise dictatorship. The public, the consumers are told that they can only purchase a particular product or service from a single company.

Direct income transfers are political cronyism and nepotism. Very often the targeted beneficiaries are old political supporters, relatives and clan members of the  politicians  and officials in charge of money transfer, in cash or in kind.

In voluntary exchange, producers come or attract consumers to sell their products or services like fruits, fish, beer, hair cut, tutorial, cell phone repair and so on. Consumers choose from various producers who offer the same or  similar goods and services, and chose those who offer them good value for their money.

No one is coerced or arm-twisted to surrender his/her money to someone else. Only when the consumer is satisfied with  the product or  service will  he/she give the money to the product seller.

In forced exchange, people are coerced to surrender their money to a big and armed body or institution. Their monthly salaries are automatically deducted of a certain percentage; their earnings in bank deposits, stocks and commodity markets, are automatically withheld of a certain percentage. When they buy or purchase something like hamburger, the price they pay is higher because of taxes and surcharges imposed on the original price of those services and commodities.

And even if the people do not like the personnel and officers assigned to help them because they are arrogant or lazy or corrupt, their taxes and fees will be used to sustain these people.  Or if people feel that certain services being offered and already budgeted are unnecessary, there is little choice to stop them. Lazy and arrogant government personnel can be kicked out of office, true, but one must set aside substantial time and effort, and money of course, to take short leaves from work and stand up as witness to usually long court procedures.

Markets and trade were invented to fulfill certain human demands for survival and modernization. Fishermen who have surplus fish catch need wood, nails and carpentry tools to build their house. They also need a boat, fuel and fishing gears and equipment. People specialize in doing a particular skill and they can have many things  they want through trade.

Government and the state was invented mainly to help enforce agreements and contracts among people, to have rule of law. Before people will stab or shoot each other over disputes in contracts, verbal or written, misunderstandings and disputes are settled in peaceful and transparent way and the penalties for violators are also made transparent.

Civil society was invented to help address certain government failures. As government deviates from its basic function of promulgating the, rule of law – the law applies equally to unequal people, no one is exempted and no one can grant an exemption – it creates one government failure after another. Civil society is non-state, non-government entities that help people to have mature, responsible and voluntary assistance to other people. The idea of being shamed among peers and neighbors is sometimes a worse punishment than government prison and incarceration.

It is important that individuals should assert their personal freedom, their right to voluntary exchange, and oppose an ever-widening system of forced exchange and government intervention. This is not a call for zero government. Government has an important but limited function in our lives. Its expansion to so many sectors and facets of our lives however, is not only dangerous, but has already wreaked havoc to our lives. The task of asserting our individual liberty is a continuing challenge for all of us. 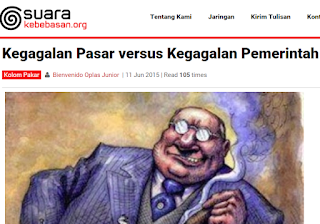