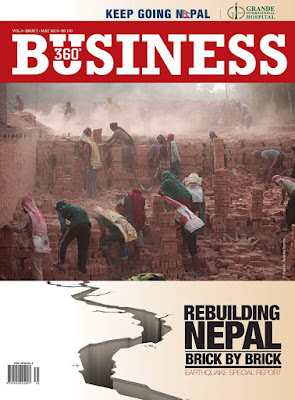 Economic liberalization, such as having freer trade in goods, freer mobility of people and  services, a better flow of investments and capital across countries and continents, almost always unleashes human potentials and talents. Where there used to be “impossible” mindset, slowly they become possible as economic, social and cultural changes unfold.

South Asia has huge potential, mainly because of its huge population and diverse geography -- from  world-class beach resorts of Maldives to the scenic mountains of Bhutan and India, up to the sky-hugging Himalayas of Nepal. What land-locked countries lack in terms of access to the ocean, they make up with mountains that can easily attract visitors and investors from around the world. The infrastructure to make this happen, such airline liberalization and competition, airport modernization and electricity supply stabilization, should be put in place.

The International Monetary Fund (IMF) released its annual World Economic Outlook report in mid-April this year. It points out some interesting points, such as the fact that in the Purchasing Power Parity (PPP) valuation of Gross Domestic Product (GDP),  China has overtaken the US in 2014 as the world’s largest economy. In terms of nominal values though, the US is still number one.

Below are the numbers for South Asian economies.

The column on Multiple is not part of the IMF report, it was added in this paper.

A number of South Asian economies are not liberalizing fast enough. That is displayed by  rather low expansion of their GDP size, only 3-4 times of expansion after two decades. Bhutan, India and Maldives have displayed good and impressive economic expansion.

In comparison, four South East Asian economies that liberalized only over the past two decades, and liberalized fast enough, have experienced GDP expansion of 5-6 times. These are Cambodia, Laos, Myanmar and Vietnam (CLMV). Indonesia is added in this table because it is the biggest economy and has the biggest population in the respective region.

The agreement among the 10-members Association of South East Asian Nations (ASEAN) was faster and accelerated liberalization in trade and investments. So these four economies that emerged from big political instabilities and even civil wars until the 70s started with protectionist mindsets. Their membership in the ASEAN slowly changed their mindsets to embrace faster economic liberalization, at least among their neighbors in the region. So far, the results for them have been generally positive. 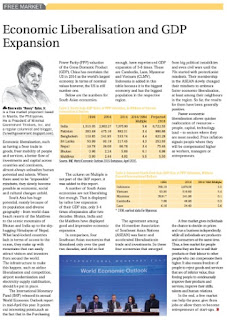 Faster economic liberalization allows quicker reallocation of resources – people, capital, technology, land – to sectors where they are most needed. Price inflation signals people where they will be compensated higher, as workers, managers or entrepreneurs.

A free market gives individuals the chance to decide on prices and run a business independently, while all individuals are producers and consumers at the same time. Thus, a free market for people means they are free to sell their products or their labor to other people who can compensate them higher. It also means freedom of people to reject goods and services that are of inferior value, thus forcing people to continuously improve their products and services, improve their skills, talents and human relations.

In the end, a free market can help the poor, give them jobs, or allowthem to become start up entrepreneurs.
-----------