* This is my article in BusinessWorld Weekender. Posted online yesterday, hard copy is published today.
------- 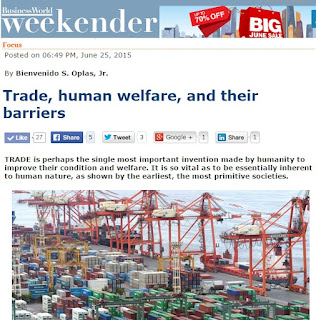 Trade, human welfare, and their barriers

TRADE is perhaps the single most important invention made by humanity to improve their condition and welfare. It is so vital as to be essentially inherent to human nature, as shown by the earliest, the most primitive societies.

This is because no man, no matter how bright and resourceful, is capable of producing everything that he needs for himself and his family, especially in modern societies. Modernization is possible only through specialization of labor and skills, making efficient production of certain goods and services, generating big surplus and using the surplus to procure other goods and services that are more efficiently produced by other people somewhere else.

While trade is vital to human welfare and progress, it is also the object of envy and contention among certain sectors of society in different countries. While it is human nature to have free trade among people, politics and governments come in to cater to special interests in society and deprive many consumers of the freedom of choice, by erecting various tariff and non-tariff barriers (NTBs) to trade. And this creates trade disputes among participating governments.

The World Trade Organization (WTO) was established in 1995 mainly to pave the way for a rules-based global trading regime. The rules are transparent and apply to all member-countries.

In a forum at the Asian Development Bank on May 21, WTO director-general Roberto Azevedo said the organization supports global trade and development via five schemes.

1. Providing a rules-based trading system that now covers around 98% of global commerce.

2. Serving as a forum where countries can sit down and monitor each other’s practices and regulations to ensure that agreements are observed and respected.

3. Offering a settlement mechanism for trade disputes between and among countries. Almost 500 trade disputes have been heard by the WTO, helping members to resolve their differences in a fair, open and transparent manner.

4. Fighting protectionism. During the 1929-1933 Depression, retaliatory trade restrictions wiped out two-thirds of world trade. Such practice was not repeated when the world experienced heavy fiscal and financial turmoil in 2008, and response by governments was mostly calm and restrained. Under the WTO, member-states knew that they were bound by rules and obligations, so they had the confidence to resist domestic protectionist pressure.

5. Providing a place where developing and least-developed countries have a seat at the table and an equal voice in global trade issues. These countries are also afforded special and differential treatment, and technical assistance to help improve their trading capacity.

While tariffs have generally gone down across many countries, there are various non-tariff measures (NTMs) and barriers that restrict free trade. The most prominent is restriction via various bureaucracies or trade bureaucratism, a serious problem for many exporters and importers.

In December 2013, a historic WTO ministerial conference in Bali produced an important output, the Trade Facilitation Agreement (TFA). Its goal is to make faster, easier, and cheaper the movement of goods across countries and borders. The WTO estimates that the TFA can reduce trade costs at the border by up to 15% for developing countries, and inject up to $1 trillion per year into the global economy, creating some 21 million new jobs worldwide.

The next challenge for the WTO is the TFA’s ratification by at least two-thirds of the member-states.

There are many other barriers to free trade. Here are the eight non-tariff measures (NTMs) imposed by different governments that limit or restrict the movement of goods and services across borders: Sanitary and phytosanitary (SPS), technical barriers to trade (TBT), anti-dumping, countervailing duties, safeguards, special safeguards, quantitative restrictions (QRs), and state trading enterprises (STEs).

STEs are also known as state-owned/operated enterprises (SOEs) and, in the Philippines, they are called government-owned and -controlled corporations (GOCCs).

In East and South Asia, the NTMs are plentiful. See these charts. In the first row are charts for the Philippines, Thailand, Indonesia, Malaysia; second row has India, China, Japan, USA. 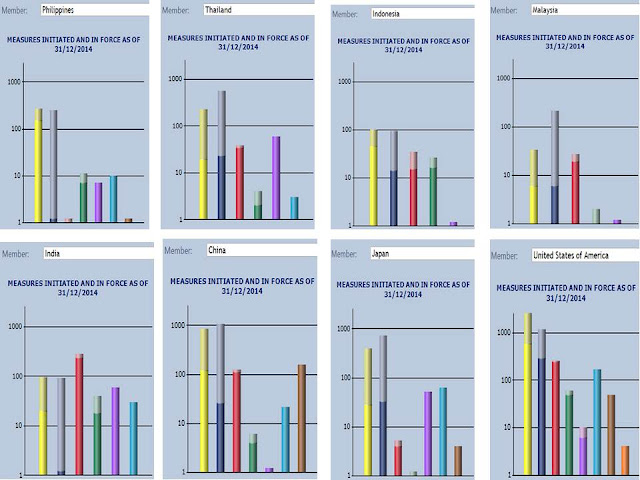 The US, falsely labeled by many people as the “chief ideologue” of the “jobs-killing free trade” philosophy, is actually a practitioner of multiple NTMs and other forms of trade restrictions.

Hong Kong and Singapore are the known practitioners of unilateral trade liberalization in goods in this part of the planet. Their NTMs are few compared to their neighbors in East Asia. UAE and Qatar used to be very small economies that became super rich largely through trade opening. 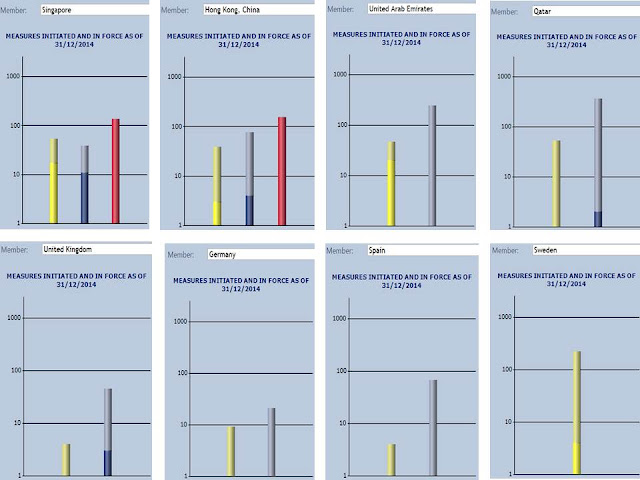 UK, Germany, and other EU member-countries have strict observation of the free mobility of goods and people across the Union. Thus, their NTMs are very few, except for SPS measures. Freeing trade is among the most important policies that any nation can undertake to unleash the entrepreneurial skills and potentials of its people.

Whether high tariffs or low tariffs but multiple NTMs, such policies deprive the people of the freedom to choose and buy those goods and services that maximize their individual and household welfare. When households make big and regular savings via purchase of cheaper, freely-traded commodities, they can use those savings and surplus to procure other goods and services that otherwise they could not buy. This expands the range of commodities among consumers and, in turn, this expands business and employment opportunities for many other people.

Free trade simply expands human welfare, whether people realize it or not.