There is an interesting article yesterday in WUWT, Presentation of Evidence Suggesting Temperature DrivesAtmospheric CO2 more than CO2 Drives Temperature. The author is right on target when  he  wrote,


The IPCC’s position that increased CO2 is the primary cause of global warming is not supported by the temperature data.

In fact, strong evidence exists that disproves the IPCC’s scientific position. The attached Excel spreadsheet (“CO2 vs T”) shows that variations in atmospheric CO2 concentration lag (occur after) variations in Earth’s Surface Temperature by ~9 months (Figures 2, 3 and 4). The IPCC states that increasing atmospheric CO2 is the primary cause of global warming – in effect, the IPCC states that the future is causing the past. The IPCC’s core scientific conclusion is illogical and false.... 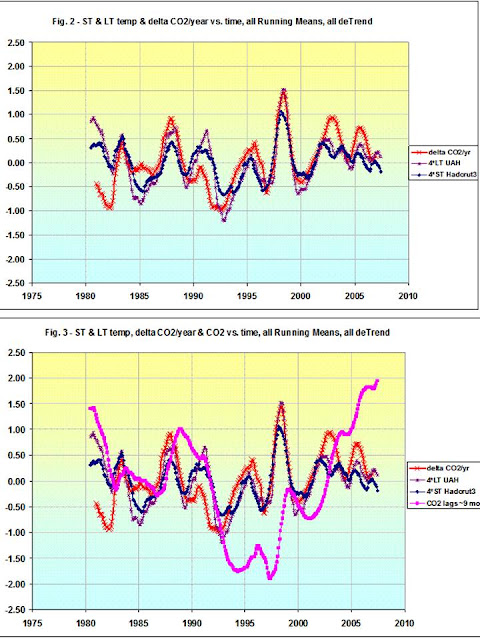 Veizer’s approach is credible and consistent with the data. The IPCC’s core scientific position is disproved – CO2 lags temperature by ~9 months – the future can not cause the past.

While further research is warranted, it is appropriate to cease all CO2 abatement programs that are not cost-effective, and focus efforts on sensible energy efficiency, clean water and the abatement of real atmospheric pollution, including airborne NOx, SOx and particulate emissions.

The tens of trillions of dollars contemplated for CO2 abatement should, given the balance of evidence, be saved or re-allocated to truly important global priorities.

How Much of Atmospheric CO2 Increase is Natural? (August 27th, 2014). He showed these two charts with a note,

But what if (I’m NOT necessarily advocating this) most of the CO2 humans produce, which is near the land surface, is absorbed by vegetation, and the observed global increase is partly or mostly due to outgassing of the oceans?

Scientists seem to make the assumption that nature is always in balance. But this clearly isn’t the case for natural sources and sinks of CO2 (you can find such plots in the IPCC reports, too).... 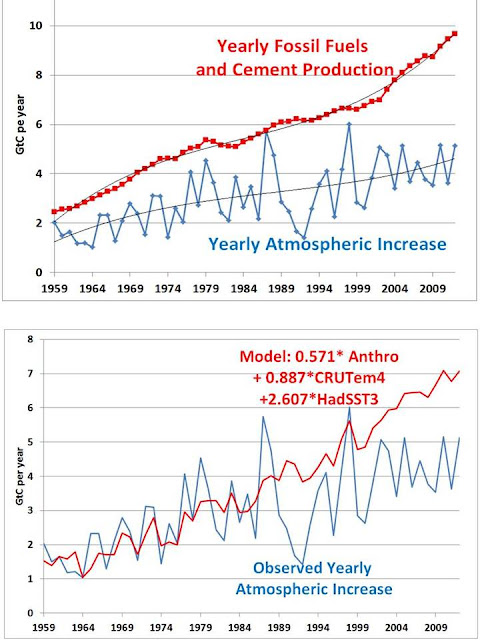 We should remember how much we have anthropomorphized recent warming: Human activities produce CO2 in reasonably well known amounts, humans do the monitoring of CO2, then humans do the modeling. Since we really don’t understand the natural sources and sinks very well — not to the <1% level needed to document that a “natural balance” exists (since human emissions are now close to 5% of natural sources and sinks) -- we just assume they are “in balance”. There, problem solved.

So, we impose a human explanation on what we observe in nature. A common tendency throughout human history. We are searching for answers at night under the only streetlamp where we can see.
http://friendsofscience.org/. Lower troposphere global temperature, monthly data from January 2002 to April 2015, vs. CO2 concentration in the planet. Note the lack of "causality" between the two. 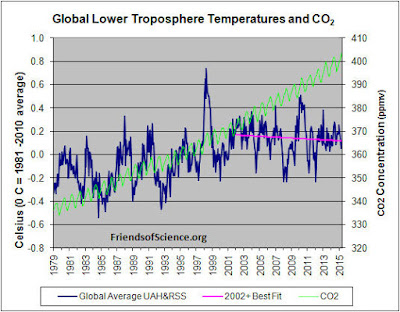 Dr. Tim Ball made a good discussion paper on this subject, Plants encouraged as CO2 levels reach 400 ppm (May 9, 2015) and observed,

All life on Earth exists because of CO2. It is essential to flora, which then produce oxygen essential to fauna.... Most plants, especially the complex vascular plants evolved in the last 300 million years. The average level of atmospheric CO2 over that period was approximately 1200 ppm....

The longer geologic record produced by Scotese and Bernier (Figure 1) shows that for most of Earth’s history the level was well above the current level. The only time when levels were commensurate with today was from 315 million years ago (mya) to 270 mya, yet for over half of that period temperature was similar to today.

Most plants, especially the complex vascular plants evolved in the last 300 million years. The average level of atmospheric CO2 over that period was approximately 1200 ppm. 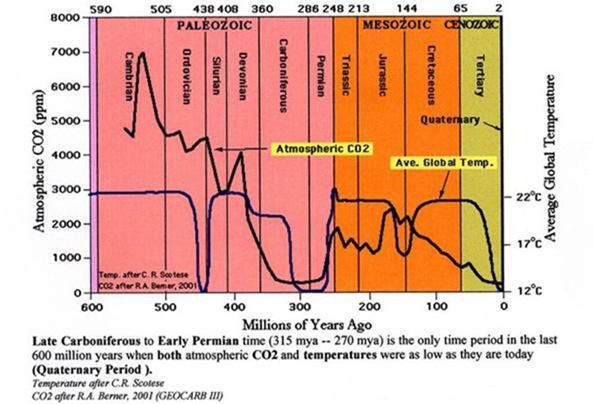 Some government units are more honest than others (many are outright lying when it comes to CO2 and climate). From Ontario government, "Carbon dioxide in greenhouses", http://www.omafra.gov.on.ca/english/crops/facts/00-077.htm

CO2 increases productivity through improved plant growth and vigour. Some ways in which productivity is increased by CO2 include earlier flowering, higher fruit yields, reduced bud abortion in roses, improved stem strength and flower size. Growers should regard CO2 as a nutrient.

For the majority of greenhouse crops, net photosynthesis increases as CO2 levels increase from 340–1,000 ppm (parts per million). Most crops show that for any given level of photosynthetically active radiation (PAR), increasing the CO2 level to 1,000 ppm will increase the photosynthesis by about 50% over ambient CO2 levels.

In many or most modern greenhouse farming in the world, farmers use CO2 generators and inflate the CO2 level from 400 ppm outside to at least 500 ppm inside. Here in one farm in Israel, they use 500 ppm. In many farms in the US, they inflate up to 800-1,000 ppm. More CO2, more and faster plant growth, more food for humanity, organic products. 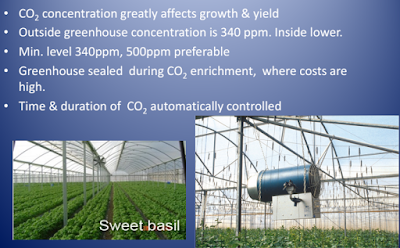 Just 0.04 percent only of total GHGs in the entire planet. More CO2 means more plant growth, more trees, more vegetables, more rice, thank you gas-of-life, CO2. Only dishonest entities like the UN, Al Gore, and many other "planet saviours" keep saying that CO2 is a pollutant, if not evil gas, that must be demonized, over-regulated, over-taxed and must be cut.