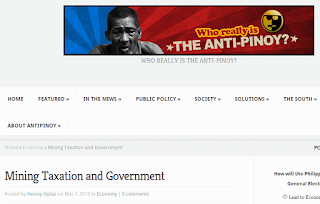 In addition, big mining companies are also expected to provide various hard and social infrastructures to the residents and workers of the mining area, on top of the various taxes and fees to the national and local governments.

In contrast, the small-scale  mining enterprises are minimally  taxed and regulated.

On top of these, there were a few recent moves by the government that expands the taxation base of big mining companies. One is the draft scheme by the Mining Industry Coordinating Council (MICC) through the Department of Finance and the Department of Environment and Natural Resources where big mining companies will be taxed twice, first on the gross revenue and second, on the end of year net income.

The other is the Revenue Memorandum Circular (RMC) No. 17-2013 dated February 15, 2013, saying that companies under the Financial or Technical Assistance Agreement (FTAA) must pay taxes throughout the duration of their contract with the government, and not just after the cost recovery period as provided under RA 7942 or the Philippine Mining Act of 1995.

These new revenue measures are created to further tax the sector which many people believe is “not taxed enough” yet and hence, endangers the environment.

Let us review how valid is this statement.

In 2010, the different players in the mining sector paid P13.4 billion in various taxes and fees to the government. There are different interpretations of what this figure represents as share of the government, local and national.

The three tables below collapsed into one image are from Dr. Artemio F. Disini, Chairman of the Chamber of Mines of the Philippines (CMP) in his paper, Getting a Fair Share: The Industry Perspective on Mining Taxation, presented at the Philippine Economic Society (PES) 50th Annual Conference last  November 27, 2012, held at the PICC, Manila.

I attended that conference and the panel on mining taxation. The other speakers in the panel were Shanaka Peiris, IMF Resident Representative to the Philippines, Tristan Canare of the Asian Institute of Management (AIM), and Donna Gasgonia of the UNDP. 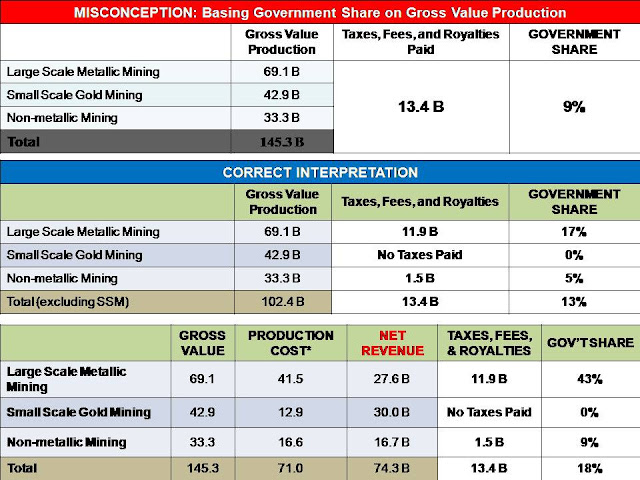 Dr. Disini was saying that the actual contribution of the large scale metallic mining industry to the government coffers was not just 9 percent but 13 percent of gross value production, as the small scale mining (SSM) sub-sector does not pay any taxes, at least to the national government.

After deduction of production cost, 60 percent for metallic and 50 percent for non-metallic, the total taxes, fees and royalties paid to the government of P11.9 billion in 2010 comprised 43 percent of the large scale mining companies’ net revenue.

This government share of nearly P12 billion in 2010 alone and constituting nearly one-half of big mining companies’ net revenue is big. It is hard to find other sectors that are taxed this much.

Thus, the statement that large scale mining is “not taxed enough” is not valid.

For one, humanity benefits from mining because no mining and mineral products means no modern life. From spoon and fork, nails and hammer, cellphones and laptops, cars and airplanes, engines and buildings, all of these came from mining. A mining expert Kennedy “Kori” Coronel aptly put it this way: “Everything that humanity needs that cannot be grown, must be mined.”

So, a “No to mining whatsoever” statement is a non-option. A corollary statement “tax mining as prohibitively as possible” is next to non-option as this will drive the legal, large and responsible mining companies and leave the country’s mineral resources to the guerilla type small-scale mining enterprises that are hardly taxed and regulated.

The appropriate attitude for government and the rest of society is to keep taxation at the minimum and go for full transparency and accountability of all mining companies, from small to medium to large firms. Putting strict regulations and high taxes only to large players but allowing small players that are often owned or protected by local politicians to disobey those regulations do more harm than good, to the environment, economy and society.
---------------

'no to mining' po ba talaga ang sinusulong ng mga taong against the mining act of 1995?

it's good to have statistics, yet it's also good to see the real picture of what we say as 'responsible mining'. salamat po sa blog na to,

So if statistics don't convince you, perhaps actual photos can. Salamat ulit,