Below are several comments I got in my various exchanges in facebook on the subject, made last week.
-------------


1. The institutional/constitutional prohibition on ownership of mining lands. History has it that private property ownership promotes responsible business and proprietorial activities. It promotes responsible stewardship. Here in RP all lands of public domains, including mineral and mining lands, are owned by the State. In the U.S. mineral and mining lands can be owned by private citizens/individuals. Today millions of American land-owners have shares in big and small mining and oil companies. 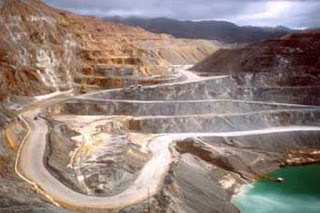 If people are prohibited from owning mining and mineral lands, they would have less incentive to improve their property and to invest in long-term venture like tourism, parks, real estate, community building, etc. I think that if mining companies were allowed to own mining lands, they would have more incentive and reason to protect their property, invest in technology innovation to reduce waste, turn nearby areas into parks, tourism spots or new communities for their employees, etc.

2. Lack of competition due to protectionism. Under Philippine mining laws, foreign corporations may only be qualified to join the country's mining industry for purposes of granting an exploration permit, financial or technical assistance agreement or mineral processing permit. This system protects Filipino cronies and oligarchs against DIRECT foreign competition.

How does this promote irresponsible mining? The mining industry is technology intensive. It requires not only technology transfer but also intellectual capital. When it comes to mining technology innovation and developments are investments made by big mining companies. And these mining companies cannot just transfer their technology or teach us how to be responsible miners without getting something in return. They want trade. Unfortunately our Constitution is in breach of "free trade" and the reciprocity principle in international law.

Lack of competition means mining companies would have less incentive to innovate, to provide better compensation package to their employees, to improve their operations and systems, to reduce wastes, etc.

3. Environmental laws that make it almost impossible for mining firms to operate. These environmental regulations add costs. In other words, regulations have economic costs. and they also impact people's and organizational behaviors.

Nonoy: Thanks Froi. The industry -- (a) big metallic mining in particular -- is absolutely the most regulated, most taxed in this country. The two other players in the industry, (b) "small scale" metallic mining and (c) non-metallic big mining like coal, cement, quarrying, are not as taxed.

On top of the usual taxes that apply to corporations in other sectors (food/resto, transpo, shops and malls, beverage, etc.), there are additonal taxes and fees like: excise tax, contractor's income tax, royalties, occupation fees (to LGUs), royalties to indigenous people, royalty to surface private owners. Then there are mandatory CSR projects to communities like putting up health facilities if not a hospital, a private school but free to students, roads and street lighting network, etc., ON TOP of various taxes and fees collected by the national and local governments.

Jayant:  Filipino regulations are so difficult that good people cannot do business in mining. So mostly only crooked foreigners can manage to do mining.

I have been following a lot of mining companies in Philippines. As you can see in the responses you get on your comments about mining from your own friends (expect in the above rare case), well-educated Filipino take pride in being armchair economists. They know exactly how mining is not helping the locals and they know exactly what the regulations should be like. This despite that they have no clue what mining is about, how capital intensive and risky it is. But this has lead to a regulatory regime where... foreigners must own no more than 49% of a mine. Now, mining companies end up owning 100% but they do accounting and legal juggling to achieve this. So, while on paper their ownership is only 49%, they do transfer of profits to accrue 99% of the profits to themselves. Now, this requires help from corrupt locals. You end up with opaque financials. Also, the kind of manipulations this requires ensure that only corrupt people using other people's money run such mines. Now this is really, really bad for Philippines. But the normal guy is incapable for understanding this causality. He acts as if he knows exactly how Philippines should be run. But Philippines somehow creates some of the world's worst minds--they seriously lack critical thinking. You end up with people who are incapable of being leaders. The people who write on your blog about why foreigners should not be allowed in into mining fail to see that so many Filipinos end up being maids and prostitutes as a result. It is a sorry state of affairs.

Nonoy: There are 3 types of mining in the country, other countries. (1) large-scale metallic mining, (2) "small-scale" mining, mainly gold, and (3) non-metallic mining (coal, cement, etc.) The anger of many anti-mining groups is often directed at (1) but they are silent on the damages caused by (2), especiallly in Diwalwal.

There are many responsible miners in (1) but there are also irresponsible ones there. Those in (1) are regulated by (a) MGB-DENR, (b) LGUs and (c) COMP, the private sector self-regulation industry association. I think many companies in (3) are also members of COMP.

Those in (2) I think have no industry association. Based on the laws that allow "small scale" mining, they are not supposed to use bulldozers, backhoes, huge trucks. Since many of them use these heavy equipment, that alone are violations of the law. But they are not and cannot be penalized by the MGB-DENR as many of them are owned or protected by local politicians.

Other than the Consti provision restricting and limiting foreign investments in certain sectors, no one among the local investors is prevented from putting up metals manufacturing or processing plants here. If no one puts up a manufacturing plant for,say, cobalt and silver, then mining companies that extract cobalt and silver should not be prevented from extracting these minerals and export them for processing abroad.

There is one nickel refinery plant being constructed in Rio Tuba, Bataraza, southern Palawan, I saw it two months ago. 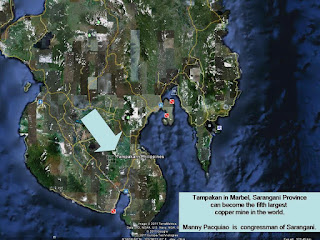 Arthur: The Tampakan Copper and Gold Project would bring in about US$6B in investment- the biggest single investment in the country. But its practically 100 percent export of extracted metallic mineral ores. If something can be done that the ores are processed in South Cotabato or Gensan, then it would give impetus to ancillary businesses in the locality, generating indirect employment and creating wealth for the people. The project would directly employ some 10K workers at the peak in 5 year period.

Nonoy: In the absence of a company or group of companies that will put up a copper, gold, molybdenum, etc. processing plant in Tampakan, should we discourage or prohibit SMI from extracting those metallic products and export them? I think No, we should not prohibit them.

Other than the consti restrictions for such high capex ventures like metals processing plants, there are bureaucracies and taxes, national and local, that make the investments in metals processing rather costly here, at least for now.

about the IPs support for SMI Tampakan project. I heard two B'laan women leaders in a forum in DLSU last January, they now have free modern hospital and healthcare, private but free basic education, cemented roads, street lights, various jobs directly or indirectly related to mining. Restrictions by the LGUs -- Provincial or City governments -- in direct opposition to an approved permit by a national government regulatory office (MGB DENR, in this case), is one clear danger to foreign investors, even if the Consti restriction has been lifted and removed.
----------