In most free market literatures, a very important concept is the "rule of law" to mean that the law, rules and regulations apply to all players and citizens. The opposite is the "rule of men", meaning that government administrators and leaders selectively apply the law to certain people while others are exempted from the restrictions and punishments of those laws.

The term "weak state" is heard more in academic discourses on political economy. As the term implies, it is an opposite of a "strong state".

A friend for more than a decade now, F. Kennedy Coronel, aka "Citizen Kori" in our frequent discussions and debates in pilipinasforum yahoogroups early of last decade (no facebook, no twitter or youtube then), made a presentation during the Mining Conference 2012, and I am making some quick comments in his paper below.

As a backgrounder, here are some of the papers of Citizen Kori some 12 years ago, posted in this blog:

Counting the Cost of Corruption in the Philippines, June 29, 2001
Discussion on the Church and Galileo, July 25, 2001
On the Nature of Government: Some Commentaries on Governance in Crisis, October 21, 2001. 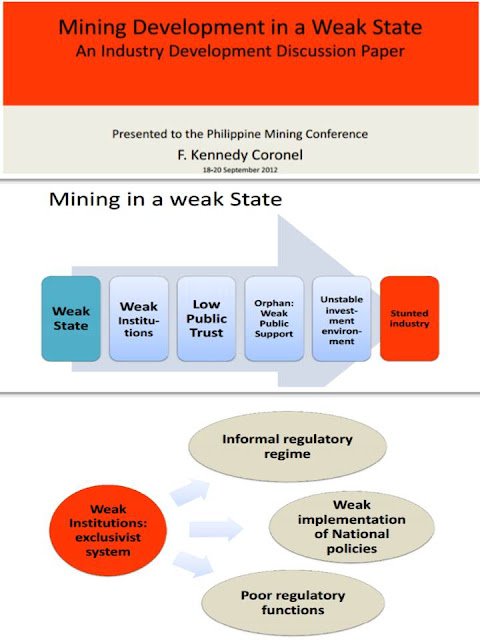 The meaning of a "weak state", he adapted Alex Magno's definition,

• “vulnerable to political accommodation, compromising the integrity of policies to suit immediate contingencies…that are insistently noisy rather than ideas that are fundamentally sound”‐ A. Magno, 2012

As I discussed above, these characteristics refer more to the "rule of men" and not "rule of law." State leaders allow certain exemptions to the restrictions of the laws, very often to their families and friends,   political allies, supporters and financiers. For non-friends or non-allies of state administrators, the restrictions of the laws fully apply, woe unto them.

A corollary to the "weak state" is the weak regulatory capability, defined by Kori as: 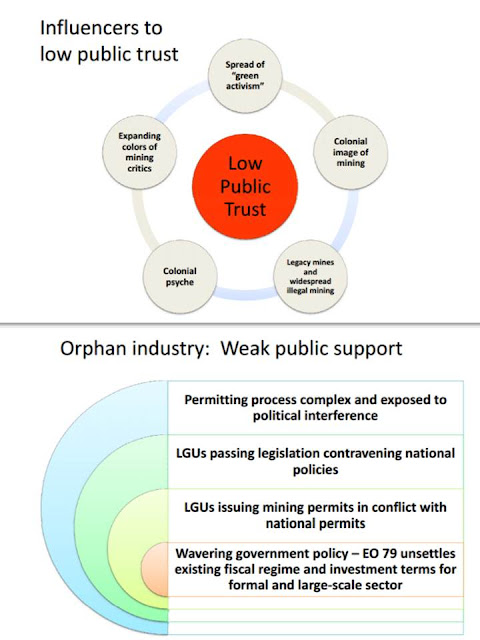 The term "orphan industry" means it is an industry that has no political parents, populist politicians do not want to be associated with being too friendly with or supportive of, large-scale corporate mining.

Then he discussed the uncertainties in the sector, and the new opportunities. 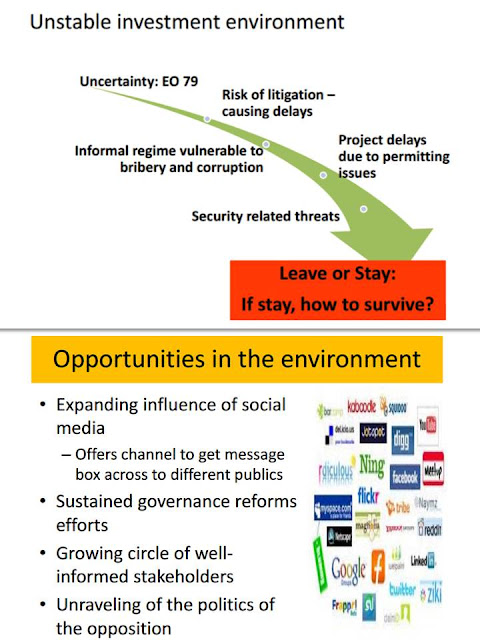 The options and strategies for the private sector to combat the "orphan industry" and general public dislike of large scale mining, according to Kori, are the following.

Come with clean hands mean (a) Consistency in words and deeds, corporate behavior must reflect policies and principles, (b) Ensure that corporate conduct is all above board and no skeletons to
surprise you, (c) Good housekeeping provides support in managing issues - Environmental responsibility and accountability, Fairlabor practices, Good corporate citizenship.

Build constituencies mean (a) Identify sectors critical to a project, seek ways of connecting, (b) Seek common grounds – Community development, Environmental awards, No to bribery, Be a preferred
employer.

Avail of institutional remedies mean (a) Seek relief and clarification from the Courts, (b) Engage the AFP, PNP on security issues based on community development principles, engage in confidence‐
building programs, and (c) Work with the Commission of Human Rights to assist the State in promoting
human rights.

The last three strategies are below: 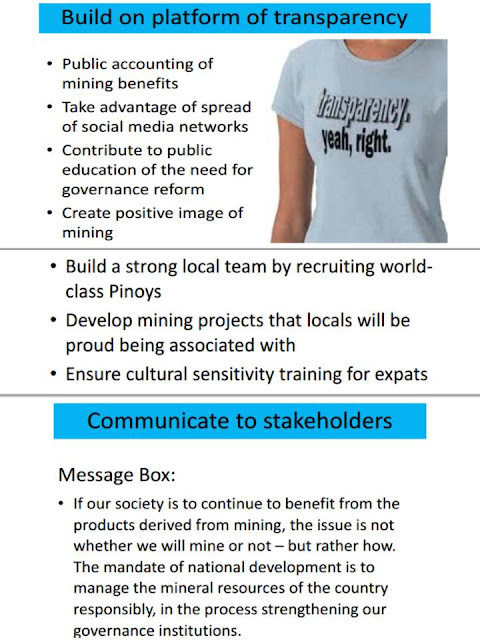 His suggestions for government reforms that are doable in the short term, meaning no need for a new legislation and much less a take over of government by any bleeding heart group are... 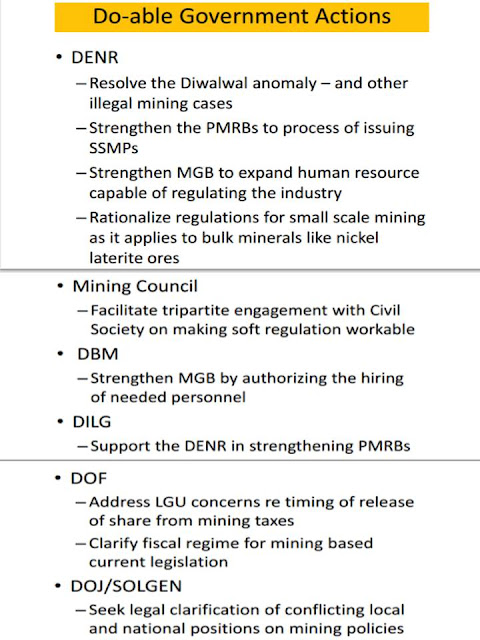 Cool and doable suggestions. The Diwalwal anomaly -- so many "small scale mining" and political fiefdoms engaged in gold mining, paying zero tax, doing zero forest rehabilitation, making zero mine tailing impoundment, etc. -- is one clear example of the rule of men. Mining laws and regulations apply only to large-scale metallic mining but not to "small scale" mining. 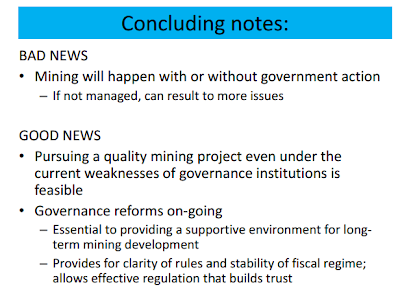 Amend to his conclusions. As Kori said in his talk at a DLSU forum last January, "What cannot be grown, must be mined." So a mining ban today (at worst) can only mean mining resumption tomorrow.
-----------