Last April 12, 2013, Food and Drugs Administration (FDA) Director, Dr. Kenneth Hartigan-Go gave a lecture at the AIM, part of the MeTA Philippines discussion series. I was not able to attend it as I attended a lecture on mining taxation at UP Diliman that afternoon. So my discussions below will be limited to his presentations. The 69-slides presentation is available here. 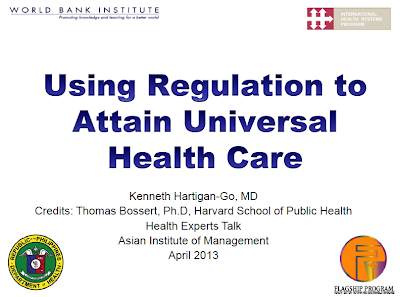 Dr. KHG's talk started with photos and lessons from the movie, "The Untouchables". The lessons were very telling, like:


Walls have ears. Colleagues could be moles. Information from one trusted source could be wrong. Intel is critical but can you trust your boss? Media sometimes gets into the way of your operations. A good regulator can also experience fear (and temptation). Sin of omission is equally as dangerous as commission of crime. The Modus Operandi of Evil – bribe, extort, threat and lastly, harm.


This illustration or model below caught my attention. There is (government) regulation but nothing on (players) competition. Not everything can be provided or regulated by the government. Competition among players is often the best self-regulation that players do, they cannot over-price or sell inferior or harmful products as the customers can boycott them anytime, if not haul them to court. I will make no comments to the next two slides. 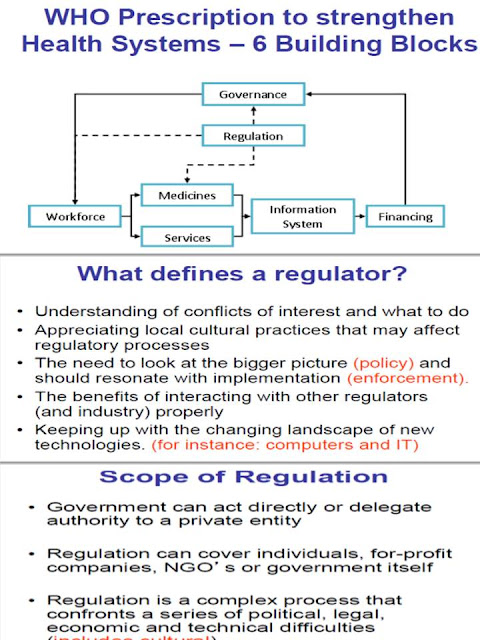 It is good that Doc KHG used the term "coercive power of the state" as government by nature, is force and coercion. It is not a voluntary organization like a tennis club or running club or rotary club that one can join and pay annual dues, then quit membership and stop paying the dues. And Yes, regulation is coercion. It is prohibition, telling players -- corporations, NGOs and individuals -- that certain things are prohibited and limited, and there are penalties for violating the regulations.

The illustration below shows the four elements of regulation. No comment. 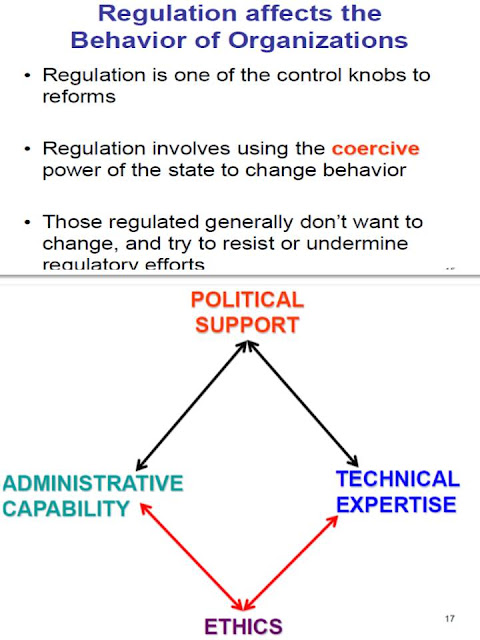 These ethical considerations are informative. They present certain dilemma to regulators. If people are allowed to free ride, they will. Like non-poor people to get UP education subsidy or DOH and PhilHealth subsidy, and keep more of their money for various personal spending. That is why government subsidies should be limited whenever possible.

About the practice of certain physicians who prescribe and dispense at the same time certain medicines and vaccines, there is indeed some "conflict of interest" there. Like they will use medicines and/or vaccines where they can get the maximum profit margin. But in certain cases, that is not the end of the story. The physicians who do this would also bend backwards and exert extra effort to serve their patients. Like spending an hour with the patients and their parents/guardians instead of the usual five-minutes visit then call the next patient waiting outside. Or they make sure that the medicines to be administered are well-handled/transported and well-stored before being finally given to the patients. 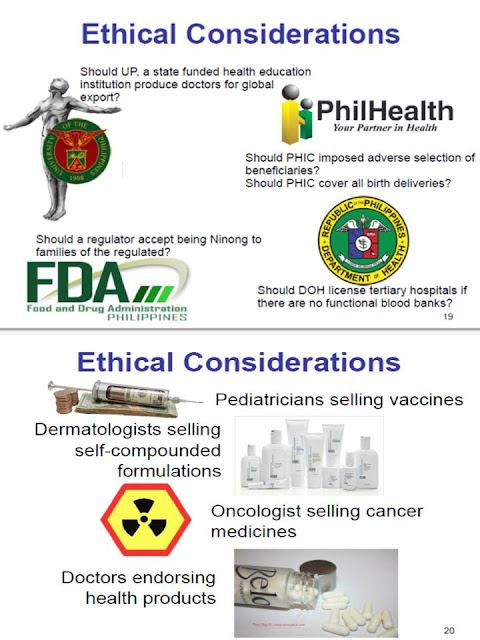 Then Doc KHG showed the six aspects of regulatory cycle. And the explanations for each component. (1) Decision to regulate can be hampered by the lack of sufficient or reliable data. If a regulation has been decided, (2) securing legal authority can be hampered by opposition by those who will be regulated. Remember, regulation almost always means prohibitions and restrictions, telling someone "you cannot do or sell this unless..."

If a legal authority (a Republic Act, Executive Order, Administrative Order, Department Ordinance, Provincial or City Ordinance, etc.) has been secured, the next hurdle will be writing rules that will require mastery of technical details. Then (4) monitor compliance, gather evidence against violators, penalize them. 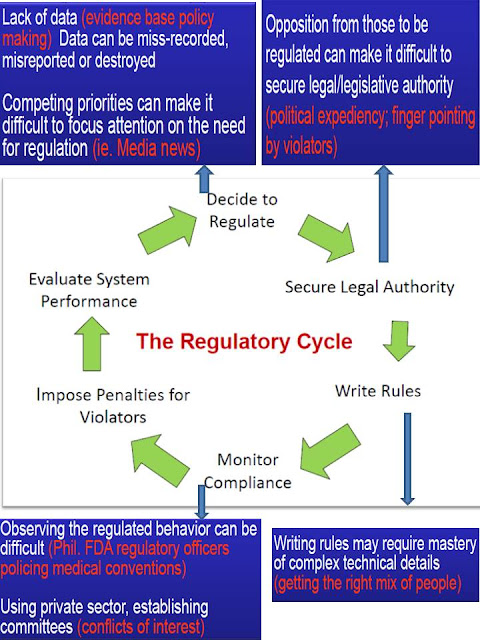 Then (5) impose penalties against violators, but inspectors can be bribed and corrupted, and (6) evaluate system performance, which again will require new sets of data. Creating regulations almost always results in some distortions that almost always requires another regulations, that cause another set of distortions, and so on.

In my book, Health Choices and Responsibilities published in January 2011, I wrote at the back cover about the experience of the drug price control policy,


And thus, the regulator will be forced to use administrative discretion, or allowing certain exemptions if only to  minimize the distortions somewhere. But if other players will notice the exemption or lax implementation given to certain players, that will create tension and ill will against the regulators and the favored players. 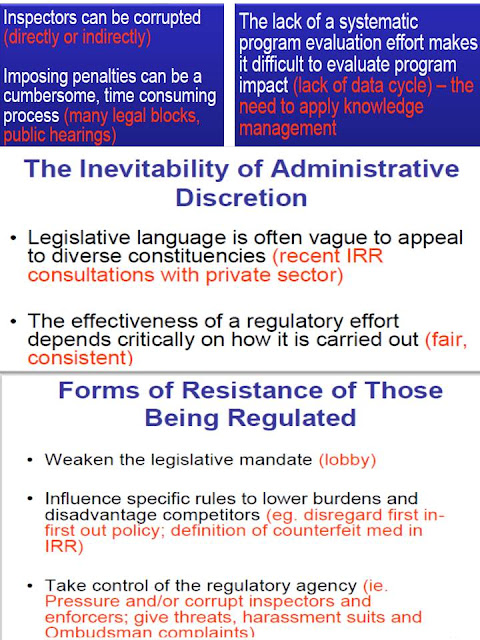 I agree with many points raised by Doc KHG here, but I think they are lacking. On top of (1) strong administrative leadership, (2) motivated and well-rewarded staff, (3) leadership with integrity and commitment, and (4) strong political support from above (President, DOH Secretary, key legislators).

Going back to the points I mentioned above, the act of more regulations simply invite more distortions and hence, more restrictions and ill-will against many of the regulated players. I firmly believe that the best regulations are (a) competition among different players in the same sector or industry and (b) rule of law, the almost certainty of punishment against violators of clear and few prohibitions. Just one law against producing and selling counterfeit or substandard medicines, if properly implemented, is enough. There is no need to create 5 or 10 new regulations on the same subject.

In the next slide, Doc KHG has implicitly recognized this problem. When there are too many violations against too many regulations, inspectors cannot just single out one or few violators, they will be accused of arbitrary punishment while allowing other violators to be free. Thus, the need to rely on voluntary compliance so that only a few violations can be expected. 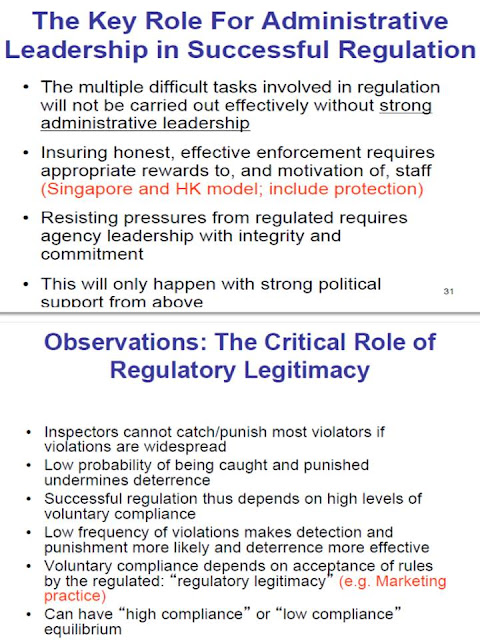 One good mechanism for voluntary compliance is via industry associations or professional associations. Each of those association has its own rules, they have their own system of rewards and punishment. If violations can be minimized if not prevented at the association level, then the job of the government regulator is made much much easy.

Market failure. Yes, they exist, along with market solutions to those failures. 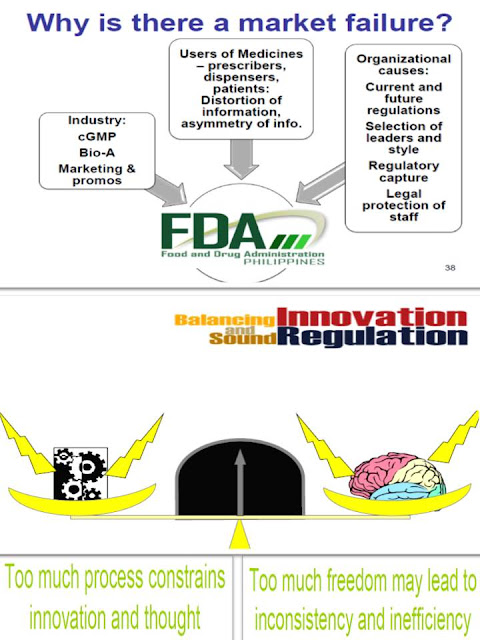 But how about government failures?