The Senatorial and local elections are just six days away. Yesterday and today, two groups in the health sector released their own separate statements endorsing certain Senatorial candidates with their respective reasons.

I got this today from the President of the Private Hospitals Association of the Philippines, Inc. (PHAPI) and a friend, Dr. Rustico "Rusty"Jimenez. This is a joint statement of PHAPI and the mostly government hospitals association, the PHA. 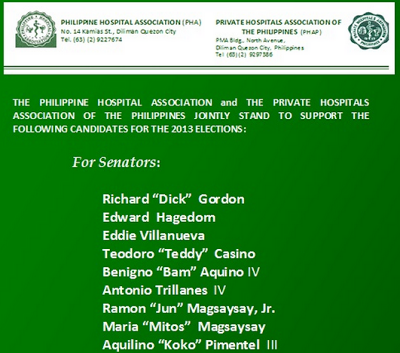 They also endorsed four party list (PL) groups, but am skipping those. Am not interested in any of those groups, I am boycotting the PL system. Here now are the reasons why the two hospital associations have endorsed the nine Senatorial candidates above. Note the last item -- overregulation of private hospitals by various government bureaucracies, local and national. 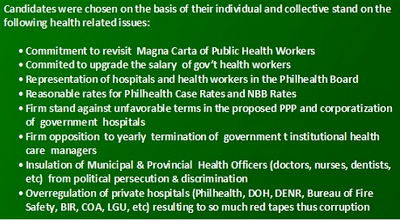 The ugly habit and corrupt nature of many government bureaucrats would show up just anywhere.

Meanwhile, here's another statement from another group of health groups. The main coordinator, Dr. Tony Leachon, is another friend of mine. They endorsed only four candidates, but mentioned eight candidates that voters should never support, based on the criteria they laid out.

Only Koko Pimentel and Sonny Trillanes are the common candidates of the two groups.
----------

Doctors Prescribe: Go Out and Vote for Health

Manila, Philippines (6 May 2013).  Trust your doctor. Doctors and health advocates called on their patients and colleagues to go out and vote for health on May 13. “Exercising your right to vote is good for your health,” said Dr. Tony Leachon, Secretary of Philippine College of Physicians, “This is a powerful opportunity for us to flex our muscles to put true health champions in Senate, who will fight for health.”

“Six out of 10 Filipinos die without ever seeing a doctor,” added Dr. Tony Dans, President of Philippine Society of General Internal Medicine (PSGIM), “The high cost of health care in the country prevents people from accessing life-saving services, and drowns families further into poverty.”

In 2010, Filipino families spent more than half of the country’s annual health expenditure according to the National Statistical Coordination Board. “Mahal magkasakit. Mabuti kung may bulsa na puwede paghugutan, kung wala mamatay ka na lang?” added May-i Fabros from WomanHealth Philippines, “Enshrined in our Constitution is our right to health, which is why we need to ensure that those who we elect into power will push for health reform policies that will make access to health services equitable for all, regardless if you have money or not.”

Sin Tax Law as Criteria in Voting for Health

“Although health is just one of the considerations when choosing candidates, its impact in our lives resonate, we need a health criteria to help us vote for true champions for health,” said Jo-Ann Latuja, Senior Economist of policy think tank, Action for Economic Reforms. “We can use their position on the Sin Tax Law as a proxy measure for health and societal reform since it addresses the issues on health financing, universal health care, governance, corruption, economic reform, and vested interests, among others.”

The Sin Tax Law or Republic Act 10351 was one of the critical and highly controversial health reform measures that passed into law before the end of 2012, amidst the strong tobacco industry lobby. "Words are cheap, what we need are true champions for health who will battle it out with vested interests in the halls of congress," said Dr. Maricar Limpin, Executive Director of Framework Convention on Tobacco Control Alliance Philippines (FCAP), one of the first tobacco control groups who fought against the anti-health Sin Tax Law of 2004, or Republic Act 9334, which maintained the status quo and kept tax rates pegged at 1996 prices. "We will vote for legislators who will fight for health, and reject those who will most likely fight against health."

"What we are presenting are Pro-Health and Anti-Health candidates based on our critical appraisal of their health position particularly on Sin Tax," continued Latuja, "With health as our criterion, we encourage the public to assess the track record of the candidates for local and national positions, particularly those who have the obligation to pass national policies that will health our health system.

The doctors, economists and health advocates presented their review process of the 33 senatorial candidates. First, they identified the incumbent candidates who had the chance to vote for what they referred to as the effective and pro-health Sin Tax Law of 2012 or the defective and anti-health Sin Tax Law of 2004. After which they assessed the most recent statements on RA 10351 of the candidates, whether they are for or against it.

Tony Leachon,MD
Consultant of the Department of Health on Noncommunicable Diseases
Director,University of the Philippines Manila,Information,Publications & Public Affairs
----------

i dont understand. do you agree with their position and endorsements? why?