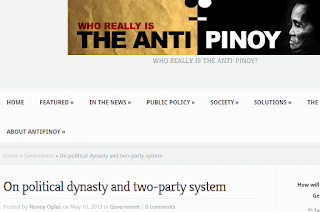 Getting voters’ support is mainly about political branding. Political parties as engines of politicians to capture political power, national and local, are originally Ideology-based. Meaning they represent unique ideologies and political philosophies that are distinguishable from each other.

This is not happening in the Philippines and many other countries. Here, almost all political parties promise or say the same things – more populism, expand welfare and subsidies, expand regulations, do not cut or reduce taxes, good governance, fight corruption – even if many of the politicians in those parties are associated with corrupt practices in the past and present.

So voters cannot distinguish one political party from the other. The only clear distinction they can make is on the personalities who lead those parties. The old political names and clans that have been there for several decades. In short, the use of clans as main political brand, not the political parties, and many voters have accepted this shift in political branding.

The major political ideologies are socialism/communism, liberalism/free market, and conservatism/authorititarity. See an earlier discourse with definitions here, Collectivism, Conservatism and Liberalism. But variants have been invented, like social democracy (soc-dem), liberal democracy (lib-dem), national democracy (nat-dem), social liberals (soc-libs), social conservatism, christian democracy, environmentalism, and so on. Their definitions can interlap and be varied, depending on who is defining what.

Nancy Binay is a never-heard lady nationally until November 2012. When she was drafted to the UNA senatorial slate last December, she suddenly belonged to the top 15. Now she is ranked 3-4. She is the eldest daughter of Vice President Jojo Binay, her sister is Makati Congresswoman Abi Binay, and her brother is Makati Mayor Junjun Binay.

Bam Aquino is the first cousin of President Noynoy Aquino, who is the son of former President Cory Aquino and nephew of former Senators Butz Aquino and Tessie Aquino-Oreta.

JV Ejercito is the son with the other woman of former Vice President Erap Estrada. His half brother is current Senator Jinggoy Estrada, whose mother, Loi Estrada, was also a former Senator.

A friend, Singapore-based Pinoy, Doods de los Reyes, made this observation about Nancy Binay and the other political clans.

(Let us go back to the two-party system to stop padding of candidates and only the chosen ones can run. Like in a basketball league, there are many teams but only a few good players in each team. The former ballboys for 20 years in other teams are tapped just to complete the 12 players roster.

Compare it with the All Star game, only two teams and both are good and deserving. Then you get players from both teams and get the cream of the crop to be called the Dream Team. Filipinos deserve a Dream Team to represent Philippine politics. Enough of coconut games, let us support a Dream team)

I like Doods’ proposal to go back to the two-party system. Usually the debates in public policy can be narrowed down to public choice of more or less government. Do we need more regulations or less? More taxes or less? Are 10 signatures and permits to start and renew a business enough (and be increased) or should they be reduced? The two-party system can address that debate in a clear, direct and more explicit way. Many opportunists and thieves hide in grey areas aka 3rd or 4th or 5th opinion and political parties.

Like the basketball league example of Doods, politicians in a two-party system are forced to undergo a party convention. They have to convince their party mates first before they can convince the rest of the voters. In a multi-party system with no follow up elections for the top two parties, even the lousiest but megalomaniac and moneyed candidates can put up a party anytime and run for elections.

Typical Philippine scenario: a political personality is not picked up as a candidate by any existing party so he sets up his own. Checks the surveys to see what issues the voting majority care about and then bases the new party's platform on these issues while taking the popular position. Forms his team from whoever is available with the name, looks, personality, political pedigree (however long ago that was), or a last name that fits with whatever catchy acronym the party can come up with a-la Words With Friends. Launch the party and barnstorm the countryside with backup dancers and karaoke CDs, dance choreographers, and cohorts who will ask the planted questions. Wash, rinse, and repeat as necessary for the succeeding elections.

Again, I agree with Doods’ observation. One good example was former President Fidel V. Ramos (FVR). He has no political party then, so he joined Laban Party and squared with former House Speaker Ramon Mitra in the 1991 Party convention. He lost, so he put up his own political party, Lakas. With many other Presidential candidates in the 1991 elections, Ramos got only about one third of the total votes but he was number 1, so he became President.

Another example is Senator Miriam Santiago. It seemed that no major political party was interested to get her and endure her mouth, so she put up her own party, the People's Reform Party (PRP) where she ran for President also in the 1992 elections. Her party did not attract many known politicians, it was put up mainly for her candidacy.

Uf people have to finger-point "who's to blame" for the low political maturity of the Filipino voters, we can point the finger to the political parties themselves because of their failure to stick to ideology-based political branding.

The party list (PL) system has further bastardized and idiotized the ideology-based political branding. There are too many PLs that advance no unique political ideology, they only advance their sectoral, parochial, or industry interests. Thus, they only contribute to political opportunism and corruption in the country.

There is no need to enact an “anti-political dynasty” law. So long as political parties say and promise the same things, political dynasties and the politics of personalities are here to stay.

So in the next round of Constitutional change, the PL system should be abolished and we must consider a return to the two party system.
-----------

Hi, thanks for sharing your nice blog. If anybody needs a Election consultant, agency, political career path, you can contact at any time.
Political campaign management companies in india
political marketing in India
How To Become a Politician In India