Late last month, I have a debate with a friend and fellow UPSE alumni, Mike Alunan, about markets and regulation. Among his arguments, below.

“Survival  of  the fittest” thinking  is inhuman? Human beings  are  not  like  animals  as  they have  the  capacity  to  surpass the  limits  of  nature by doing  more  than  simply  adapting  to  nature  as most animals  do---but they have the capacity  to  even conquer  nature  through  their  creativity  that leads  to  science  and technology.

And if we believe that  Darwin’s  dictum  of  “survival  of  the  fittest”  also  applies  to  human  beings,  then  we  have reduced  ourselves  to  the  level  of  the  beasts, which  only  survive  for  the  present  and even  devour their off-springs only  to survive for  the  day.  Darwinism  is  a  kind  of  free  market  competition  for  survival  among  beasts  fighting in  the  wild  jungles.

Social Darwinism basically  justifies  also  the  free  market  competition  of  man vs. man  as  a perceived  normal order of things that  escalates, at  times,   into  their  worst situations like  wars, similar  to  the  Peloponnesian  Wars  among  the  ancient Greeks  that led  to  the  downfall  of  Athens and the  Greek  civilization…. 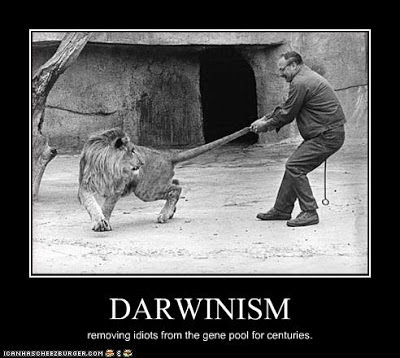 I told him that his arguments are terribly wrong, in both economics and natural science aspects. The Darwinian definition of "survival of the fittest" does not mean only the ability to eat and eat to survive. It is also the ability to evade predators and "murderers" in the natural world. That is how animals "chose" their skin colors and textures to look like their natural environment so that they cannot easily be detected by their would-be food or would-be murderers. So chameleon, monitor lizards, butterflies, birds, etc. have skin or feather colors that look somehow similar to their natural environment.

In the economics aspect, there is nothing, zero, nada, in free market philosophy that people should harm other people -- eat them, butcher them, stab them, etc. just to survive and prosper. Free market and free individuals simply mean that people are free to do what they like. They can over-work or underwork, over-sleep or under-sleep, over-sit and over-eat or go on a hunger strike, over-drink and over-smoke or avoid these temptations, over-sex, what have you. So long as people harm no one. Be as fat as a pig, no problem. Be as rich as Henry Sy or Zuckerberg, no problem. Be as drunkard as Erap, no problem. People are free to be industrious or lazy, to be responsible or irresponsible, to be efficient or lousy. That is free market and free individuals.

When government comes it, it usually distorts this freedom of individuals. Thus, even those who wish to meet their creator early by over-eating or over-drinking and over-smoking and become sickly later, are prevented by government from doing so. Government over-taxes you and me, those who take care of their body more responsibly and work hard, so that government will have more money so it can subsidize the healthcare and prolong the life of these people, on top of hiring too many government personnel to do endless subsidies. This is not cool, it is simply irrational.

His words that "Social Darwinism basically justifies  the free market competition of man vs. man... that  escalates, at  times, into  their  worst situations  like  wars..."  is of course, wrong.

ALL big wars, no, zero, nada exception, are instigated and initiated by governments, or armed/rebel elements wanting to overthrow an existing government so that they will be the new government. Free market means freedom to exchange, voluntary exchange. I sell you tomatoes and onions, you do not like my products' quality, or you may like them but you do not like my price, you walk away and look for another seller of tomatoes and onions. I did not nor will I ever put a gun on your head so that you buy my tomatoes whether you like it or not. Zero war, zero coercion, nothing.

In government, I give you the lousiest policeman or a stupid teacher or a terribly corrupt but shrewd Mayor, you have to pay for them, by hook or by hook. There is threat of prison and political harassment, so that you pay various taxes, fees, fines and mandatory contributions,  whether you like it or not, to pay for these thick army of politicians and bureaucrats. Expand this coercion to a national and international scale, and you have wars, bombings, destruction. The more armed government wants to impose its will and biases on other people or governments.

Mike also complained that "The problem with Nonoy’s free market extremism is that he labels  everyone not agreeing with his brand of free market and minimalist government as statists and socialists. Isn’t labelling and stereo-typing by itself a form of statism, being devoid of dynamism."

This is wrong. There are other proposals or advocacy that are more extremist than mine. Like the anarchists -- they want zero, nada, authority and government. Even the protection of private property rights should not be given to government. I am a "minarchist" and respects that there is role for government. I believe in big government -- only in promulgating the rule of law and protecting people's right to peaceful life. Thus, armed and organized criminals and robbers, armed rapists and murderers, armed and organized land grabbers and carnappers, should be met by a bigger armed government plus a credible justice system.

I label "statists and socialists" those who are explicit in begging for "more state intervention please, more forced collectivism please." People want to forcibly collectivize education, healthcare, housing, pension, etc. -- by collectivizing also your own income, your own savings and investments. The role for personal and parental responsibility is blurred and negated if not corrupted, by more government responsibility. And this results in often lazy thinking. Edukasyon sa mahirap at di mahirap (ala UP), gobyerno. Medicines sa mahirap at di mahirap, gobyerno. Tractors sa mahirap at di mahirap, gobyerno. Condoms and pills sa mahirap, gobyerno. Do not ask why some people are poor, do not dig for laziness and personal irresponsibility, just close your eyes, for any problem of the poor, there is only one solution -- gobyerno. This is lousy and lazy thinking. And people complain when they are called as statists and socialists.

There was no follow up from Mike after that.

To follow was our debate on his proposal to impose a fishery taxation...