The Metropolitan Manila Development Authority (MMDA) is among the huge bureaucracies in the country. It is supposed to solve problems related to heavy traffic congestion, street flooding, dirty streets, undisciplined motorists, and other functions to develop Metro Manila and its component cities and municipalities. 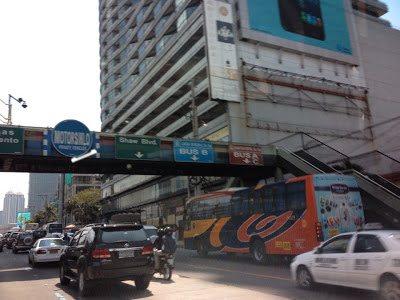 Today, a friend, JB Baylon, posted in his facebook wall about the MMDA. He wrote,

The MMDA has, over the years, tried so many schemes to bring sanity to our traffic: bus lanes, color coding, motorsiklo lanes, yellow lanes and yellow boxes, designated bus stops, even timers at bus stops (!!!) etc. But the MMDA has never been consistent and persistent in implementing these schemes, so, except for the color coding, everything else eventually is forgotten/fails. Not the Gates of Hell, perhaps, but definitely a metropolis of indiscipline, of "regulations-as-recommendations", of anything goes! Traffic - it's more fun in Metro Manila, the Philippines!

I suggest, Nonoy, its because they don't have the right goals in mind: 1) traffic safety 2) traffic ease. Most of these guys don't drive, so they don't have to feel the pain of drivers. Most policy makers have drivers who take the strain, and the enforcers use public transportation. Neither are behind the steering wheel. Poor quality and non-standard signage is one example of this fact. The US, Australia, Europe and other nations have adopted a Uniform Signage code so that signs are at a uniform style/type, height, location and so on. Privately owned roads, such as the majority of the roads in Makati, but which are open to the public must conform.

I told Steve that these guys have clear and explicit goals in mind -- they are the central planners who will influence everyone else's behavior as motorists or commuters. More prohibition means (a) more revenues for MMDA and LGUs due to lots of acts that are prohibited, and/or (b) more extortion as many innocent motorists who are less informed of certain traffic rules will be forced to negotiate with them to spare further hassle and trouble.

Traffic congestion is very often an engineering problem with engineering solutions. If bureaucratic solutions are adopted, more problems are created than solved.

Someone suggested that “laws that make traffic violations be made a criminal offense, and said laws enforced, make the driver spend 30 days in jail when he makes an illegal U-turn, or 45 days when he fails to stop at a red light. Hopefully spending time in jail would make drivers think twice about breaking traffic rules. And don't improve the conditions of the penitentiaries. Let the driver suffer.”

Most likely this person does not drive here in Metro Manila, or does not drive often. In this country, all  traffic prohibitions apply only to ordinary motorists. Red plate vehicles, police vehicles, low-numbered plates (6, 7,... 16 or 4 - 5 digits, etc.), armored vans, or ordinary civilan cars but with political VIPs inside, are all exempted from those prohibitions. The government is the worst violator of the rule of law, and it  wants to impose more prohibitions, more restrictions.

Another suggested that MMDA should be abolished. I support his proposal but one problem there is that once a bureaucracy is abolished or shrunk, LGUs themselves will put up a new inter-LGUs body with a bureaucracy similar to MMDA. So one bad reality we have to live with is that bureaucracies just sprout like amoeba, they are everywhere, expanding or perpetuating themselves. The least we can expect from them is to limit their powers to create and expand the list of prohibited acts as if we ordinary motorists and commuters are their slaves.

1. MMDA and LGUs want people to take public transpo, to car pool and reduce traffic in MM. Fine. But they make commuting hard and very inconvenient. For instance, you ride a bus from Ayala or Edsa, going to LRT taft to go to Monumento or nearby. MMDA forces commuters to get off about 300 meters away from the LRT station, they have to walk under the sun, or under the rain and flood, or avoid possible pick pockets along that distance. Fine if one is not carrying anything heavy or feeling well. But if one is sick, or carrying heavy things, such a huge discomfort to commute.

2. In Buendia, Makati city govt created a long line of "No jaywalking" along the island, sometimes as far as 200 meters. So to go to the other side, one walks 200 meters east or west, cross the street, then walk another 200 meters to one's destination. Again, if one is carrying heavy things, or valuables, or not feeling well, the discomfort of commuting -- and govt says people should commute more and not drive their cars.


People should not be given more prohibitions, like prohibiting crossing across an island even if traffic is not moving. Rather, to have pedestrian crossing instead, make people walk as short as possible to get to their destinations. The city hall councilors who made this type of prohibitions never never commute or walk across Buendia everyday. Ordinary employees who pay taxes to makati city hall do.

Makati City hall collects P200 per jaywalker + the hassle of getting one's ID confiscated by a city hall bureaucrat, to be redeemed at an office near the railway tracks. I used to observe the local bureaucrats who penalize ordinary folks. They inspect IDs. If the person can name drop some big names or present a govt-related ID, say a former soldier or former govt personnel, no penalties, they can walk freely. I saw also some extortion, some jaywalkers would rather offer to pay P100 and be spared of the trouble.

Nonoy, the problems you describe arise from the lack of experience of the policy makers. They don't walk anywhere, nor do they drive themselves. Thus, they have no "frame of reference." They may have "bad" motives, but just as likely they just don't have a frame of reference that helps them to see the issue. Another example of this is the use of relatively thin metal railings as lane dividers. Some even have small, but bright, yellow warning lights. From the side they look impressive BUT from the perspective of approaching drivers they are only an inch or two wide. Difficult to see. Many of the blinking warning lights are the same. Driver's have a hard time seeing them early enough to easily and safely change lanes or take avoidance.

Another example of the lack of frame of reference is with motorcycles. Drivers of motorcycles have no vision of how difficult it is for car/truck drivers to see them. The cyclist can see everyone, so he assumes (wrongly) everyone can see him. He wears dark clothes, at night, with a motorcycle that doesn't have working lights. It would help matters greatly if we could see things through the eyes of the user.

I suggested that the air-con vans are the best car pool that can greatly reduce traffic and the need for people to bring their cars from home to office. It's like a school bus -- from residential village (even from the house if one knows personally the driver) to office, very convenient, instead of taking 3-4 rides to office (tricycle from village to highway, jeep to MRT/LRT station, then train, then jeep to office) . If one is carrying heavy things or valuable items, taking 3-4 rides is very inconvenient, so driving one's car becomes a hard choice even if there is heavy traffic and office parking is  expensive. The air-con vans eliminate this inconvenience, people ride comfortably to their destinations. But these air-con vans are under heavy regulation, high franchise fee, even high extortion by the LTO and/or LGUs.

In another note, JB Baylon suggested,

Our VIPS (political, business, social - a small group) are easily divorced from the day to day woes that bear down on the ordinary Pinoy: lining up to do various things; hiding from credit card collectors; falling late in payments for utilities; waiting for over-loaded public transport or sitting behind the wheel as traffic inches forward; worrying about wet market prices and comparing grocery prices, etc., etc., etc...and yet they are quick to speak of addressing the peoples' NEEDS and PROBLEMS! How would they know what that means? We must really search for the next leader who has himself FELT the pain the rest of us feel!

I told JB that I disagree with his point. People experience different types of daily realities. Commuters of buses and trains have different realities compared to motorists and drivers of private vehicles, and each group wants things and regulations to be done in their favor. Thus, commuters want bus or jeepney stops to be right in front of train stations, causing traffic congestion, while motorists want the bus and jeepney stops to be far from train stations to reduce congestion.

What we need is the abolition of central planning thinking and bureaucratism in many services and sectors in society. To limit central planning to basic rights, like protecting the people's right to private property, right o life and liberty, have strong rule of law there. Thus, government can centralize the police and justice administration system, but government should step back from over-regulating public transpo, etc.

My favorite example is the food vs. health sectors. In food, there is not a single government carinderia or resto, not a single government super market or talipapa, and yet people are eating. In health, there are tens of thousands of government barangay health centers, tens of thousands of DOH-sponsored pharmacies/ Botika ng Barangay and Botika ng Bayan, there are dozens and dozens of DOH and LGU hospitals, there is drug price control policy, a mandatory 32% discount for medicines of senior citizens and persons with disabilities, a government health insurance monopoly, and health problems are expanding, not declining.