Being populist and highly welfarist to get high public and voters' support is a scourge of many legislators and politicians. They propose more public spending, or more anti-business policies just to say they have authored or co-authored a pro-poor bill or law.

One such law is the mandatory discount of 20 percent + 12 percent VAT-free credit for a 32 percent effective mandatory discount, for senior citizens (60 years or older) in their purchase of medicines, hospitalization and healthcare bill, plane fare, restaurants bill, and so on. The law does not distinguish rich and poor senior citizens. So that even the richest senior citizens in the country can get nearly one-third price off from various private enterprises and businesses, even if they can afford those prices without any discount, and even if certain drugstores, restaurants, bus lines or airlines, other business entities are struggling financially just to survive. 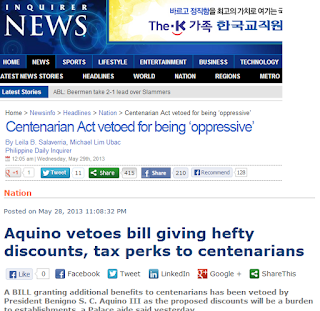 And I read yesterday stories like this (headline stories by the Inquirer and BusinessWorld, upper and lower photos, respectively.

About 7,000 Filipinos aged 100 years old and above will have to hang on a little bit longer before they get additional benefits after President Aquino vetoed the proposed Centenarian Act that would have earned them each a P100,000 bonus, plus discounts on purchases.

Aquino vetoed the measure for being “excessive (and) unreasonable” and for being “patently oppressive.”

What caught the attention of the President was a provision in the bill proposing a whopping 75-percent discount on goods and services for the centenarians.

The 75-percent discount would not be tax deductible for business owners and the President said this “exceeds the usual mark-up rate of most businesses and will obliterate profit margins and result in capital loss.”...

Albay Rep. Edcel Lagman, the bill’s main author, was quick to assign the blame on the Senate version principally authored by Sen. Francis Pangilinan that jacked up the discount to 75 percent from the 50 percent in the House version…

Aquino spelled out his reasons for thumbing down the bill in his veto message to Congress dated May 15.

“The 75-percent discount exceeds the usual mark-up of most businesses and will obliterate profit margins and result in capital loss. The provision granting the exorbitant discount may thus be subjected to a constitutional challenge from both retailers and service providers,” Aquino said.

“Furthermore, the 75-percent discount is patently oppressive as it will force retailers and service providers to exclusively bear the income loss as the proposed measure does not provide for a tax deduction to recover the said discount.”

A BILL granting additional benefits to centenarians has been vetoed by President Benigno S. C. Aquino III as the proposed discounts will be a burden to establishments, a Palace aide said yesterday.Under the centenarian bill, Filipinos who reach 100 years old will receive a cash gift of ₱100,000 and value-added tax (VAT) exemption of 75% on the sale of certain goods and services.

Deputy Presidential Spokesperson Abigail F. Valte said the Bureau of Internal Revenue (BIR) has been clear on the government’s position that the VAT exemption "may be too heavy without a tax deduction on the part of the establishment." …


Mandatory, forced and coercive price discounts by law of any amount, whether 10 or 30 or 75 percent or higher, is wrong and confiscatory. Here are some reasons why.

One, those welfarist and populist policies make government even more powerful and bigger. Government does not own private enterprises but it can dictate how owners and managers of those establishments should price their products and services. And assuming that these establishments can survive after being oppressed with forced discounts, government comes in to impose various taxes and fees.

Two, those proposals and laws only impose the full burden to the private enterprises and entrepreneurs, government is spared from burden sharing as they do not allow tax credit for those forced discounts.

Three, those proposals do not make any distinction between rich and poor people. One reason why some people become centenarians is because they or their children, grandchildren, relatives and friends are very rich, they can afford various life-extending healthcare services. This cannot be said of certain establishments that may be struggling just to survive, much less make a modest and sustainable profit to remain in business.

Four, one "law" that keeps coming up even if it is not legislated by Congress or any other government body, is the "law of unintended consequences." If there are too many privileges and price discounts given to certain sectors, some businesses will simply stop selling or producing those goods and services often demanded by those sectors. So "cheap but not available" is the new problem.

Welfarism and populism via government intervention and legislation is wrong. They invite more stupidity in government and society as a whole.
----------