No, no, no. Peter Wallace does not advocate the same things as Vladimir Lenin, Joseph Stalin and Mao Tse Tung. Peter of the Wallace Business Forum, is an Australian businessman and consultant who has lived in the Philippines for nearly four decades now, has a Filipino wife and kids, and advocates market-oriented reforms in the economy.

I did not feel like writing another paper on Labor Day yesterday as I have written several papers on labor economics already. So I am reposting Peter's article in the Inquirer today. I share his ideas on this subject.

The trouble I find in writing a column is that I tend to repeat myself—because the things I complain about are still there, or worse (in my biased view), are still there after I’ve offered a solution.

“The security of tenure is probably one of the worst pro-labor laws you can imagine. If there’s one thing it’s not, it’s security of tenure. It deters, instead of [encourages], job creation. You think twice, thrice before hiring anyone because of the huge cost and difficulty of terminating. Or you hire for five months, and then kick the employee out in the most hurtful fashion.

“If a job is necessary, when you fire someone, you just hire someone in his place. There’s no reduction in the available job statistics. Someone lost, someone else gained. The ‘loser’ works harder next time to ensure he retains the job, the ‘winner’ works harder to ensure he keeps it. Productivity goes up, cost goes down.”

This is so blindingly obvious to me that I can’t for the life of me see why it hasn’t been changed. Only the simplest of minds would think protecting an employee regardless of performance or corporate need is desirable. Maybe a century ago, when you didn’t have to compete with the world, may such a concept have been tenable, but not today. Today, in the global community, the Philippines ranks a miserable 65th among 144 countries. (Mind you, it’s an improvement from 85th in 2010, but the Philippines must aspire to be in the top 25 percent of economies surveyed.)

The next thing is minimum wage, and here’s what I said before, too, on it:

Labor groups argue for higher wages on very reasonable grounds that P456 ($11.12) per day is not a decent living wage. I agree. But zero, which is what close to 3 million Filipinos (or 10.1 million—a more realistic and, sadly, more believable figure, based on SWS’ latest survey) get is even less acceptable. They get zero because they have no jobs. They have no jobs because businessmen aren’t investing here. Foreign businessmen aren’t investing here because they can get cheaper labor in China, Vietnam and Cambodia. Even in Thailand and Indonesia.

Do you see the link? High minimum wage isn’t the only factor that is driving foreign investors away from the Philippines, although all surveys and anecdotal discussions indicate it’s a major one. Do you want a low-paying job or a no-paying no-job?

Instead of getting P456 in daily wage, around 10.1 million Filipinos who want a job get nothing. In the informal sector in the provinces, a daily wage of P230-P280 is common, and people there somehow live on that. Now I’m not suggesting that’s an acceptable wage; it’s not. But what I am saying is that people can survive on far less than P456. But they can’t survive on nothing.

Don’t get me wrong: I’m very supportive of labor, I want everyone to have a decent, well-paying job. I believe that the two issues I mentioned are the reasons people don’t have decent, well-paying jobs because they cause investors, the ones who provide jobs, to look elsewhere, to where they are not constrained like this.

Globalization has changed the game, and we’d better learn how to play it to win. What high wages and restrictive conditions also do is encourage many businessmen to work outside the system.

It was good that the law was changed to allow night-time work for women, but take it further. Allow flexible working hours as long as these total no more than 40 in a week. The world is changing, and we must, too.

If the labor unions truly cared for workers, they’d be arguing on behalf of these people. Arguing, not for uncompetitively high wage rates, but that all companies, formal and informal, pay the SSS, PhilHealth and Home Development (Pag-Ibig) contributions that every Filipino should be given….
------ 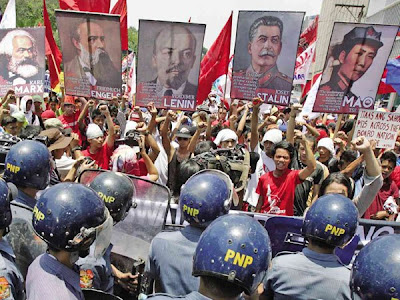 Of course it is horrible to see photos of Stalin and Mao in a labor demonstration. But the good thing is that at least their believers are getting more transparent in their advocacies, that they express their pinions and ideological leaning via public demonstration and not via armed violence.

Karl Marx and Friedrich Engels  invented a rigorous critique of capitalism then. Vladimir I. Lenin invented the idea of a revolutionary party to capture state power, and led the Russian Bolshevik revolution. Stalin succeeded Lenin and invented dictatorship of the (Russian) dictators. Mao invented the idea of peasant revolution, led the Chinese communist revolution and the succeeding dictatorship and massacres for nearly three decades. Without revisionism by Deng Xiaoping and succeeding leaders, China would be a bigger version of North Korea by now -- destitute, terribly poor and isolated.

My usual advice to labor activists and their leaders is simple: Get out being a worker. Be an artist like Gary Granada, be a taxi or jeepney driver, put up a barber shop or barbeque stall or a carinderia or sari sari store, etc etc. No one puts a gun on people to become employees forever.